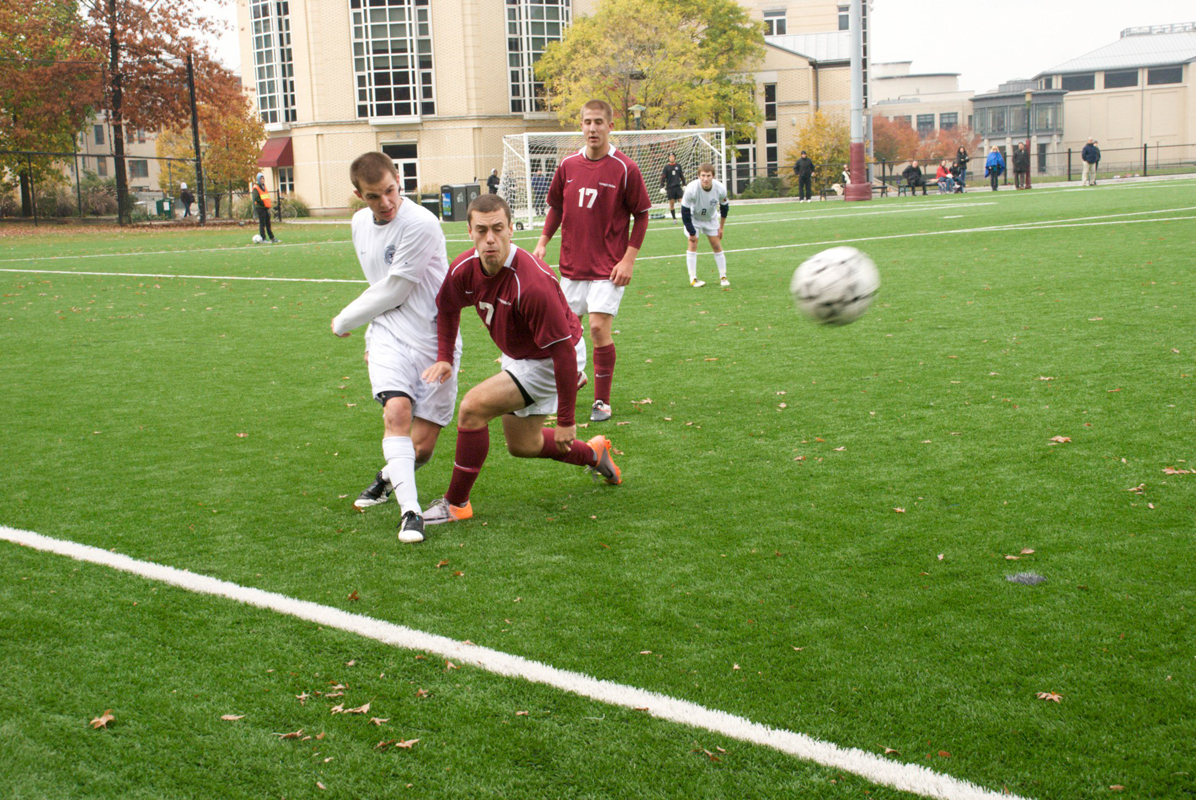 Junior Scott Gerfen (No. 7) competes with a player of the opposing team for possession of the ball. (credit: File Photo by Tommy Hoffman )

The men’s soccer team started its season strong at home with two victories. The team saw its first win over Hobart College with a 3–1 score, and its second was over seventh-ranked Stevens Institute of Technology at 1–0.

This past weekend, the Tartans played two more games. After falling 5–3 to Baldwin Wallace College, the team rebounded with a 3–2 win over Ohio Northern University. After only first two weeks of play, the Tartans come away with a 3–1 total record.

Currently, the men’s soccer team is ranked No. 13 in the nation.

The Tartans’ victories have been led by the upperclassmen. In the first game against Hobart, junior Matt Sarett scored the first goal for the Tartans to tie the game. Senior Alex Abedian scored second to put the Tartans at a 2–1 lead, before junior Max Tassano scored to increase the lead to 3–1 before the game ended.

The game against Stevens kept the attention of Tartan fans, as the game was tied 0–0 until the last 40 seconds of the game.

The Tartans and their opponents went back and forth the entire game. Both teams had opportunities to score, but saves from junior goal keeper Chris Madden kept the Tartans in the game. The Steven’s goal keeper held his own as well until the last seconds when senior John Crawshaw scored the only goal of the game.

Despite losing against Baldwin Wallace, the Tartans still played a respectable game, scoring three goals. The first came from junior Mike Ferraco and the other two came from sophomores Louis Ferragonio and Daniel Kursman-Neri. It was Ferragonio’s first goal as a Tartan.

The Tartans will travel to Geneva College on Wednesday for a 7 p.m. game.

The team will then host Allegheny College on Saturday for a 1 p.m. game on the Tartans’ home turf, where they remain undefeated.