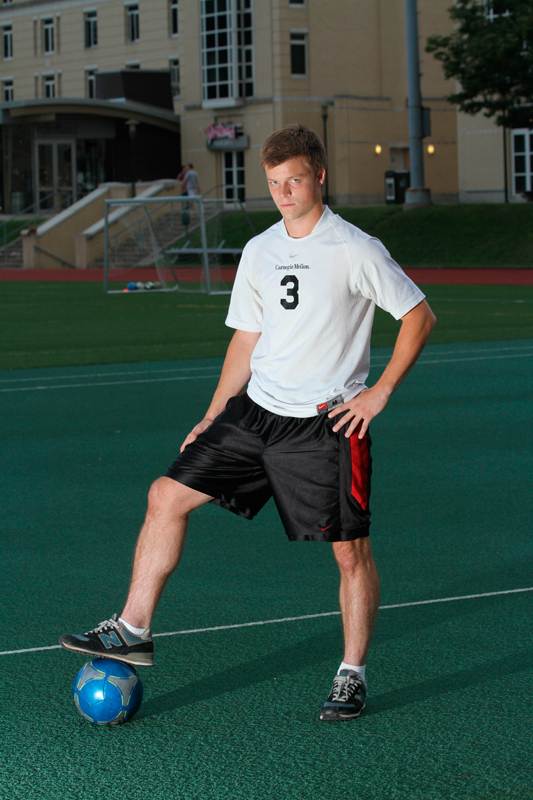 No. 3 senior Ben Bryant scored his first goal of the season this past weekend. (credit: Jonathan Carreon/Photo Editor )

Tartan defender of the men’s soccer team Ben Bryant is not only impressive on the field, but also in the classroom.

Last year, Bryant played in all 16 soccer games and started in 13 of them. He is a chemistry and Spanish double major, with minors in biomedical engineering and business administration. He plans on staying at Carnegie Mellon for a fifth year and playing one more season on the soccer team because he had a medical redshirt when he was a first-year. Upon matriculation, Bryant plans on attending medical school.

He has been playing soccer since the age of five, for a total of 16 years.

“The camaraderie our team has on the field is the best part of being on the soccer team,” Bryant said. “My funniest moment on the team came last season when Chris Wysocki, a current junior, scored a must-needed goal, and after he pulled his jersey up to show a t-shirt underneath with the question written, ‘Why Always Me?’ ” Bryant said.

The new season, with some key wins early, looks hopeful for Bryant. “My proudest moment thus far was when we beat Hobart and Stevens; Stevens was ranked seventh in the country this past weekend, kickstarting our season with a 2–0 record,” he said.

“Ben is a great teammate and leader,” junior midfielder Matt Sarett said. “He sets a good example for the younger players with his work ethic and attitude.”

With such a strong start, the future for the team looks bright. “For this season, my goals for myself and the team are to win the UAA Conference and get a bid to the NCAA tournament to then compete for the national championship,” Bryant said.

Overall, Bryant has had a great experience so far. “What is most rewarding, but also most challenging, about being a Carnegie Mellon University athlete is juggling the rigorous academics of Carnegie Mellon on top of a very busy athletic schedule,” he said.