Brianna Magill is ready to begin her final soccer season 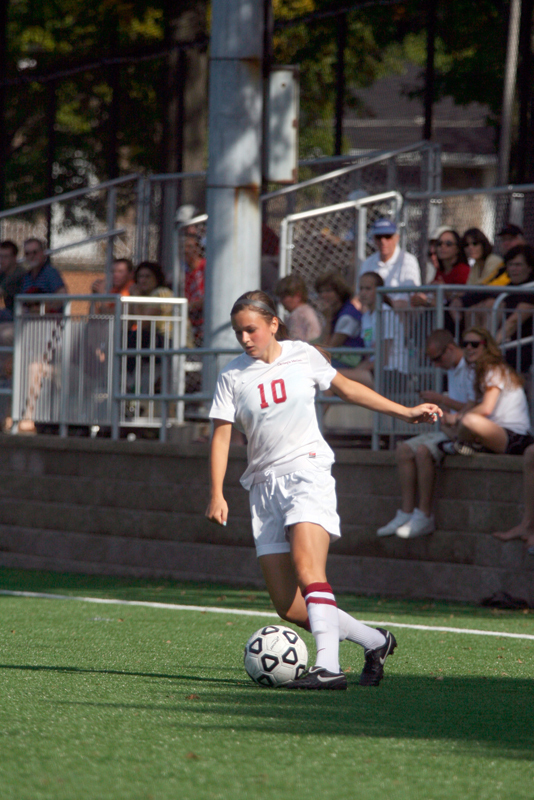 Hailing from Oak Brook, Ill., senior forward Brianna Magill is gearing up for her final soccer season at Carnegie Mellon.

Magill recalled what she felt were her greatest accomplishments over the past three years of playing on the team.

“My proudest moment on the team was last year, when we played at Johns Hopkins and forced them into double overtime.

Even though it ended in their favor, it was a great team effort and showed us that we can play with the best teams in the nation.

They ended up being undefeated for the season and [were] very highly ranked,” she said.

She began playing soccer at age five, and has enjoyed improving her game over the years. “The most rewarding part about being a CMU athlete is getting the opportunity to travel and represent the university across the nation,” Magill said.

For her last season on the team, Magill is ready to challenge herself.

“Our team goals for the season are to win the UAA Championships and make it to the NCAA playoffs. I think we have a really good chance of reaching both of these goals, because we’re already playing better soccer than last year,” she said.

Playing on the team allowed her to establish a deep connection with her teammates.

“My favorite part about being on the soccer team is being around my friends all the time. Even though it’s a lot of hard work, it’s worth it to be surrounded by my best friends everyday,” Magill said.

“Bri has great energy and brings a lot of joy to practice. She is always making people laugh.
On the field, she is fierce and one of the key pieces to our offense,” said senior midfielder Stephanie Hare.

Magill was quick to share some of the funnier moments of her collegiate soccer career. “Our coach told us to get on the end line, which normally means we’re about to do a fitness test. At the last second he told us we could go home. A few of us started crying because we were so happy,” Magill recalled.

This year, Magill plans to finish her degree in business administration, with a focus on manufacturing management and consulting, and a minor in sociology.

After graduation she hopes to have a job in management consulting in either New York or her home state of Illinois.