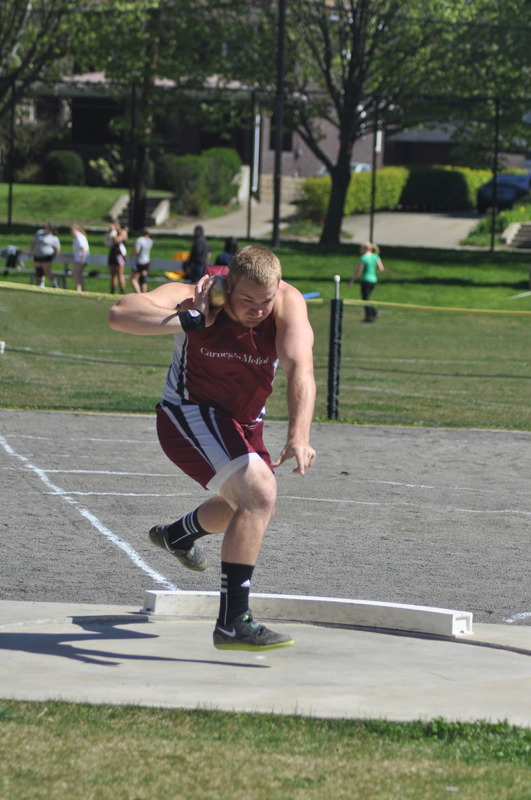 The Carnegie Mellon men’s track and field team hosted its annual quad meet this past Saturday. The Tartans finished in first place overall with 171.5 points, followed by Westminster College with 166 points. Penn State Behrend and Washington & Jefferson College both came in third with 161 points.

The meet started off with the 3,000-meter steeplechase, in which sophomore Josh Newby crossed the finish line first with a time of 9:18.41. This was not only a personal best for him, but it was also a Gesling Stadium record for the steeplechase. Newby also placed first in the 800-meter run with a time of 1:58.75.

Junior Noel Titus competed in only one race at the meet because of an injury. He made it count, however; Titus ran a career-best time of 22.18 in the 200-meter dash and won the race.

“The athletic training staff took great care of my hamstring. I think adrenaline helped me push through the pain, and having a rowdy cheering section didn’t hurt either,” Titus said.

The Tartans’ 4x400-meter relay team came in second place, with a very close finish. When first-year Thomas Vanderberg received the baton at the final leg of the relay, the Tartans were in fourth place out of six. However, he passed the Penn State Behrend “A” team. By the time he reached the top of the 100-meter mark, he was at the heels of the first and second place runners. The Tartans ended up finishing second with a time of 3:29.47, only 0.27 seconds behind Westminster.

In the field events, sophomore Nathan Cheek won the hammer throw with a distance of 49.22 meters. Senior Anthony Hernandez followed with a 48.03 meter toss. Sophomore Zachary Erra-Hernandez won the discus throw with a career-best mark of 47.05 meters. Erra-Hernandez also had the first place throw in the shot put with a distance of 15.54, while first-year Gino Pilato threw a season-best 14.47 meters for second place.

First-year Michael McDermott competed in the long jump for the first time, in addition to placing second in the high jump with a height of 1.83 meters.

The track and field team will be continuing its outdoor season, competing again this coming weekend. The distance runners will travel to Bucknell University on Friday, and everyone will compete at Westminster College on Saturday.