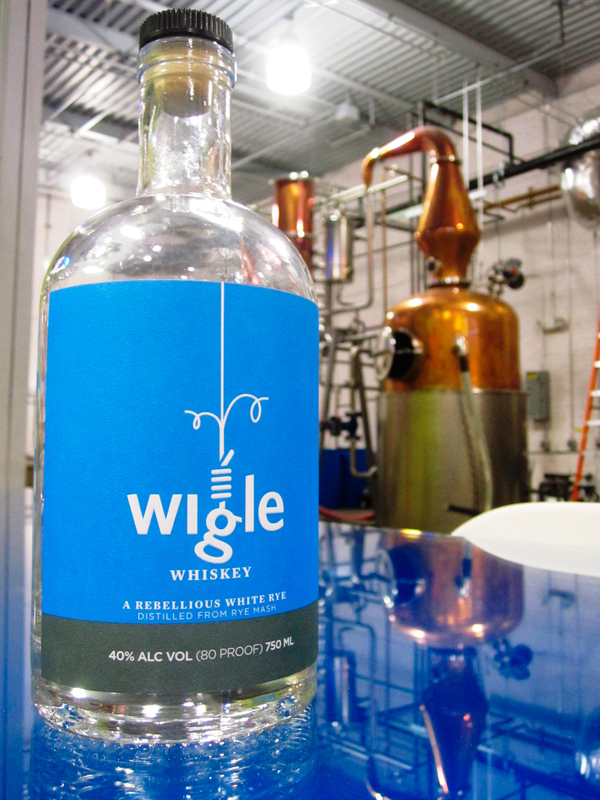 Wigle Whiskey remembers Philip Wigle’s death by hanging sentence, from which he was pardoned, by including a noose in its logo. (credit: Daniel Tkacik/SciTech Editor) 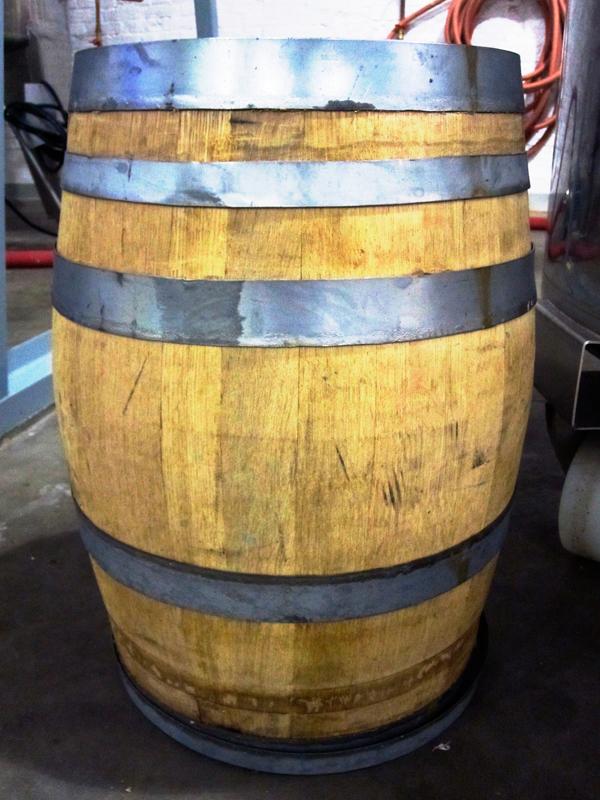 Aging in American oak barrels allows the wood and the spirit to interact, bringing out flavors such as vanilla and caramel that wouldn’t exist otherwise. Aged or dark whiskey resides in the barrel for at least two years. White whiskey either bypasses the barrel completely or spends only a small amount of time in it. (credit: Daniel Tkacik/SciTech Editor)

It’s a sunny, warm Saturday morning. The streets of the Strip District are loud, lively, and bustling with hundreds of pedestrians buying wholesale meats, produce, and Penguins paraphernalia. Just a few blocks east, though, in the slightly quieter, more tranquil part of the neighborhood, a family gathers around a giant stainless steel pot — they’re making whiskey.

That’s whiskey with an “e,” since it’s not from Canada, nor is it from across the Atlantic. This is pure, homebred whiskey being produced in the heart of a special region when it comes to the history of alcohol in America. Wigle Whiskey, a new, family-owned whiskey distillery located in the Strip, opened its doors to the public this past March. It’s the first of its kind in western Pennsylvania since the infamous Whiskey Rebellion, a tax protest that took place in the area over 200 years ago.

“Harry Truman said the Whiskey Rebellion was one of the six most important events in American history — and this is the guy who made the decision to drop the atomic bomb,” said Eric Meyer, who co-owns the distillery with his father and sister. The distillery is named after Phillip Wigle (pronounced like “wiggle”), a good-natured whiskey distiller who was sentenced to death for treason during the Whiskey Rebellion.

“He was sort of the ultimate wrong place, wrong time guy,” Meyer said. Wigle was luckily pardoned by President George Washington and eventually ended up living a peaceful life distilling whiskey in West Virginia, according to Meyer.

Meyer explained that Pittsburgh’s role in the rebellion was one of his family’s motivations for starting the distillery. “We don’t have the space nor the resources to make the museum that the Whiskey Rebellion deserves,” he said, but the Wigle team does offer tours of the distillery in which visitors learn all about the history of the Whiskey Rebellion and Wigle’s role in the revolt.

“One of the things I’m hoping is that, through our business, we can raise awareness about the event,” Meyer said. “I think there are a lot of people in Pittsburgh that are oblivious that this even occurred here.”

The decision to create the distillery was “a family decision,” according to Meyer. His father was a retiring lawyer, his sister an entrepreneur, and Meyer himself, who previously earned a master’s degree in public policy and management from Carnegie Mellon, was finishing up work with the municipal government in Washington state. The family was ready for something different.

“We decided that we’d like to do a business that was located in the city of Pittsburgh, where we’re from, that added to the already very rich urban fabric that we have here,” Meyer said. They decided that Meyer would handle the various business-related duties, his father would take on the role of master distiller, and his sister would handle many of the marketing tasks.

After picking the Strip District site in August 2010, construction of the distillery began in February 2011. The family received its federal license to distill and immediately started distilling in December 2011. Just three months later, they began selling their whiskey to the public.

Pennsylvania is known for its strict alcohol laws, and one uncertainty that loomed over the family’s shoulders during the development of the business was whether or not they could sell their product to customers at the distillery. Until this past February, one month before Wigle Whiskey officially opened, it had been illegal for any distillery or brewery in the state to sell its products to customers on-site. The passage of a new law changed that, just in time for the Wigle opening.

“Once that went through, this was really the vision we had, to create this distillery in the Strip District that was a point of pride for the city,” Meyer said.

As for the whiskey itself, the company takes a more traditional approach by bypassing the aging process in oak barrels — that is, to sell it in its “white” form. This, Meyer explained, is reminiscent of the way it was made in the past.

“We’re really trying to get away from the ‘dark whiskey is better than aged whiskey.’ It’s different,” Meyer said. “With the white whiskey, because it’s not really put into a barrel, you taste the grain. The aged whiskey, what you’re really tasting is the wood.”

The distillery won’t be avoiding aged whiskey, though. Their first batch of aged whiskey was placed in barrels just last week. The product will be ready to sell in another two years.

In addition to breaking stereotypes associated with the type of whiskey, the Wigle team hopes to help improve the perception of the liquor itself. “It’s a lot of trouble getting people who have had one bad experience with a very bad whiskey to start afresh,” Meyer said. “We want people to come in here with an open mind.”

For the time being, Wigle’s white whiskey has appeared to sit rather well with customers.