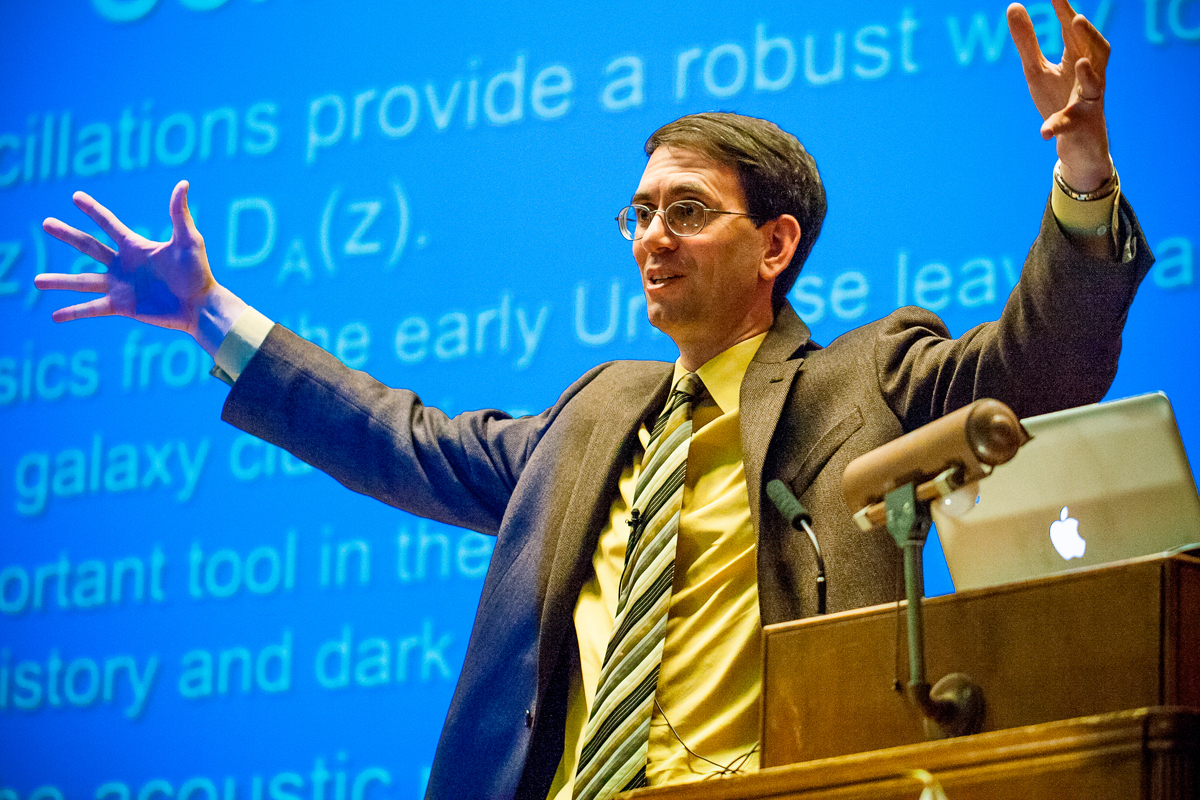 Daniel Eisenstein of Harvard University gave the annual Buhl Lecture in the Mellon Institute auditorium last Tuesday, discussing “Dark Energy and Cosmic Sound.” Eisenstein is a professor of astronomy at Harvard and is the director of the third phase of the Sloan Digital Sky Survey (SDSS). Much of his work has explored baryon acoustic oscillations in the early universe, the phenomenon referred to as “cosmic sound” in the talk’s title.

The Buhl Lecture is an annual event held by the physics department in which a recognized physicist speaks on a current topic in physics at a level geared toward a broader audience, according to the event’s website. Past guest speakers have discussed quantum computing, dark matter, and microbiology, among other topics. Current Secretary of Energy Steven Chu spoke on single molecule biology in 2003.

Provost Mark Kamlet introduced Tuesday’s talk, which attracted about 200 students, faculty, and community members to the Mellon Institute. This year marks the 17th lecture since the Buhl series was restarted in 1996. Mellon College of Science Dean Fred Gilman, who holds the Buhl chair in the physics department, introduced Eisenstein.

Eisenstein’s lecture progressed from broad historical questions on the nature of the expansion of the universe into progressively more specialized results from recently acquired data. He began with a short introduction to the idea of dark energy, the substance required to cause the universe to expand at measured rates.

Understanding the rate of expansion of the universe involves precise measurements of the rate of movement and position of other celestial objects moving away from Earth. The difficulty of determining these cosmic distances was one of the themes of Eisenstein’s lecture.

Imagine you want to determine the distance to a star you see in the sky. To you, two stars might appear equally bright, but one star might be dimmer and closer while the other is brighter but farther away. This problem applies to larger-scale structures as well, such as galaxies and clusters of galaxies. Astronomers therefore try to find consistent events and structures they can use as “standard candles” or “standard rulers” that aid in measuring distances anywhere in the universe.

An example of a standard candle is a Type Ia supernova, which has a known and very consistent brightness. When supernovae are observed from Earth, the distance can be calculated based on the difference in apparent luminosity with the known light curve.

Eisenstein focused on a standard ruler that he helped develop. Baryon acoustic oscillations, he explained, are visible patterns in the density of matter in the modern universe, caused by events that happened when the universe was only 400,000 years old. The patterns have features that repeat every 490 million light years, allowing astronomers to determine distances at large scales.

The final part of Eisenstein’s talk discussed results from the SDSS and how they related to earlier theoretical predictions.
“The problem [with large-scale theoretical models],” Eisenstein said, “is that you need a lot of data.”

As the third phase of the SDSS continues over the next two years, the BOSS and three other sky surveys aim to create an even more complete picture of the universe. It is these data sets that help Eisenstein and his colleagues to more precisely answer questions about the early universe and its continued expansion, helping us better understand the world we live in.