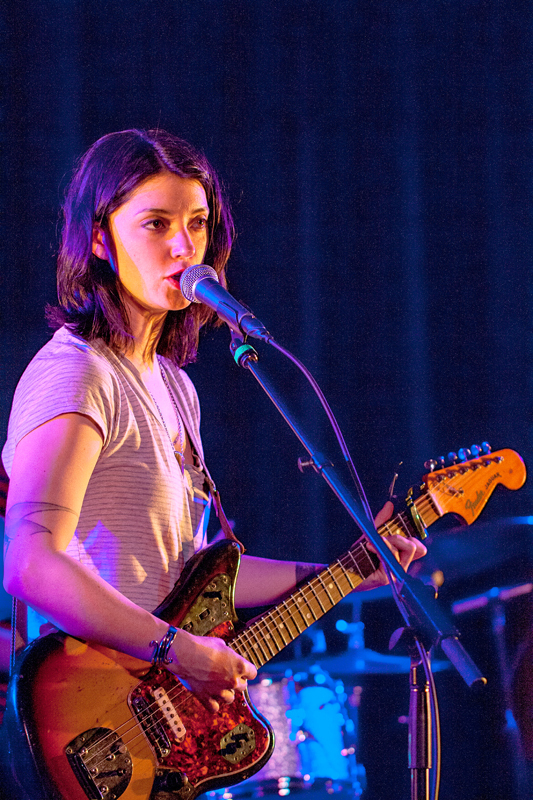 We went for the music and stayed for the banter.

Flock of Dimes is a musical project created by Jenn Wasner (half of the folk rock duo Wye Oak). She played first, backed by a bassist and her producer on drum machine. The sprawling set was a clear departure from the sparser, cleaner sound that Wye Oak has developed.

Wasner’s vocals were often lost among the sea of reverb and guitars, but her strongest work of the night included the moments when her voice took center stage, as well as certain riffs on her song “Prison Bride” and the chilling, self-described ghost story “Apparition.” Wasner closed with a song she wrote after a dream she had of Swedish pop artist Robyn. “REPLICA” was Wasner’s own effort to clone Robyn, during which she sang and danced alone on stage.

After a brief stage reset, Van Etten and her band began their phenomenal performance. The audience was smitten, as Van Etten played the majority of her newest album Tramp, which was released in February of this year, interspersed with a few older tracks.

Before she left the stage, Wasner warned the audience that Van Etten would have everyone crying in some sort of collective, cathartic viewing experience. But the actual show was a mix of emotion, with Van Etten’s songs ranging from those about moving on in life, to being an independent woman, to getting out of a relationship and trying to quit smoking. Her jokes between songs brought some refreshing quirkiness to the set.

At one point she engaged in a conversation with a guest who was doing some acrobatics on the floor between the front row and the stage. Van Etten dedicated a song to her and then recounted in detail a scene from a Don Hertzfeldt animation (My Spoon is Too Big) to maintain the light mood of the show.

Behind Van Etten was a video projection of highly manipulated film clips — mirrored reflections of subway trains, dogs chasing a stick through the sand, a woman walking through a forest, and a city with the camera focused only on a woman’s feet. These were the weakest parts of the show, due to some technical stuttering, but Van Etten encouraged fans to contribute to her “visual quilt” by submitting video footage of anything they believed to be beautiful to her website.

The show revolved around Van Etten — her jokes, her extended thanks to all the people who made her tour possible, and most of all the growth in her songwriting. The sharper edge of her newer tracks kept the evening moving. Van Etten and her band closed their set with an extended version of “Joke or a Lie,” an expertly layered, moving, and bittersweet performance.