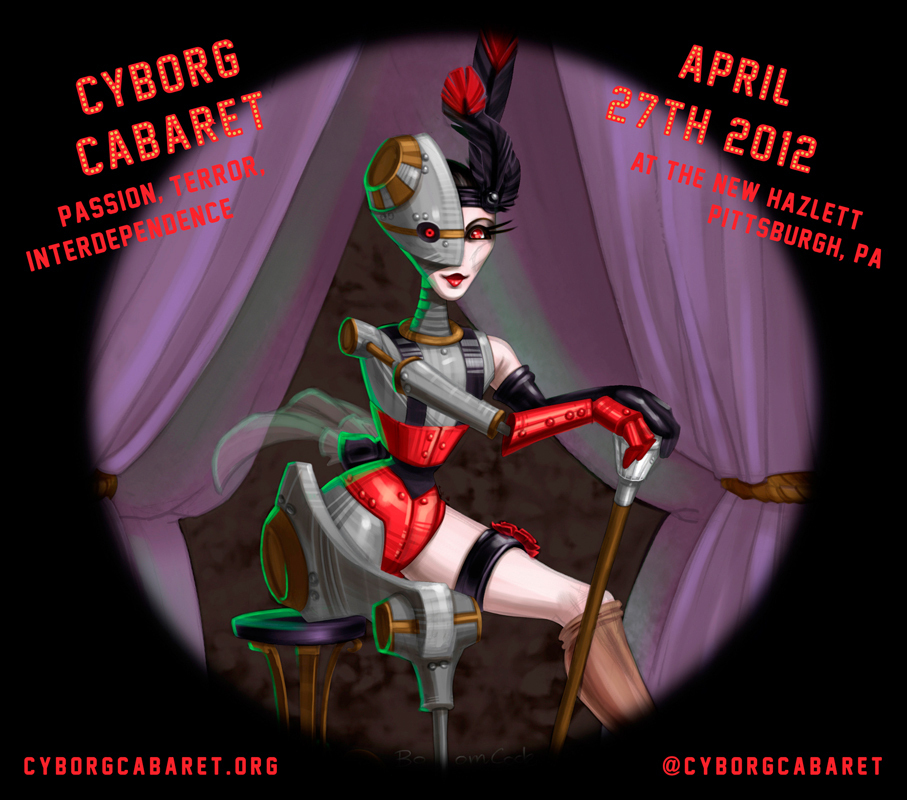 “We talk about the sci-fi notions of robots in society, but, you know, it’s already happening. You just may not see it.”

Dan Wilcox, a Master of Fine Arts student and co-curator and co-host of last Friday’s Cyborg Cabaret, hoped to expose the crowd at the New Hazlett Theater to the growing relationship between humans and robots in society.

“It’s really surprising, the breadth and depth of the type of robots that are not science fiction but that are real life and are actually existing,” Wilcox said. “And we only see a little of that. Most people in general might not be aware that there are so many crazy things going on.”

The show was hosted by Wilcox, his co-curator Heather Knight (a Ph.D. student in robotics), and Data the Robot, a social robot created by Knight that has performed in many onstage productions. Data charmed the audience by telling jokes, introducing an act, and asking questions like, “Do you ever think about what it all means? This life — you know, when the power button is in the ‘on’ position?”

Many of the acts in the cabaret were underwhelming or confusing, inciting awkward laughter or applause from audience members. The cabaret as a whole had a distinctively eerie vibe, perhaps due to the natural fear that society has toward the role of robots in the future.

Perhaps the most entertaining act was Wilcox’s own “Robot Rumble.” The rumble featured Master of Fine Arts students Jonathan Armistead, Carl Bajandas, Craig Fahner, Steve Gurysh, and Luke Loeffler wearing cardboard costumes of famous robots, including the Honda ASIMO, the Carnegie Mellon Crusher, and Google’s self-driving car. The robots engaged in a WWE-style fight until everyone on stage, including Wilcox, had been taken down.

Wilcox’s “Robot Rumble” was a follow-up to his piece at the first- and second-year Master of Fine Arts student showcase at Bakery Square last month. His inspiration for this project was the increasing development of human-like robots, and he hoped to entertain audience members while simultaneously exposing them to robotic technologies they may not have previously known about.

“The real point of the whole thing is exposure,” he said. “It’s like tricking people into learning about these things and being interested in them.”

Another act, Harmon’s “Disintegration (after myself),” was a multimedia piece that examined “the delicate relationship between people and their technological prosthetics,” according to the program. The piece centered on a video of Harmon in various locations — on a subway, in a convenience store, at the grocery store — and bystanders’ reactions to his fake prosthetic arm malfunctioning. As the video ended, Harmon’s arm sparked and fell off. The act was coherent and accessible, while still sending an important message about societal notions of technological prosthetics.

Cyborg Cabaret was made possible by funding from the 2011 Carnegie Mellon School of Art Interdisciplinary Award. Wilcox and Knight proposed the idea in April of last year and have been collaborating with community members and planning the event since. The pair worked not only with those participating in the acts, but also with community organizations like Assemble, Hack Pittsburgh, VIA, and the STUDIO for Creative Inquiry.

“It was more about us getting people from outside of CMU and from different disciplines ... and getting their acts in there,” Wilcox said. “The whole thing was a collaboration.”

Wilcox is unsure if Cyborg Cabaret will become an annual event, since he will be working on his thesis next year. Regardless of whether the event returns again next spring, it succeeded in bringing to light questions about robotic technology in society and inviting its audience to explore and understand the world’s increasing dependence on technology.

As Wilcox put it, “It’s interesting but also a little scary, if we want that or not.... We should at least think about it a little bit.”