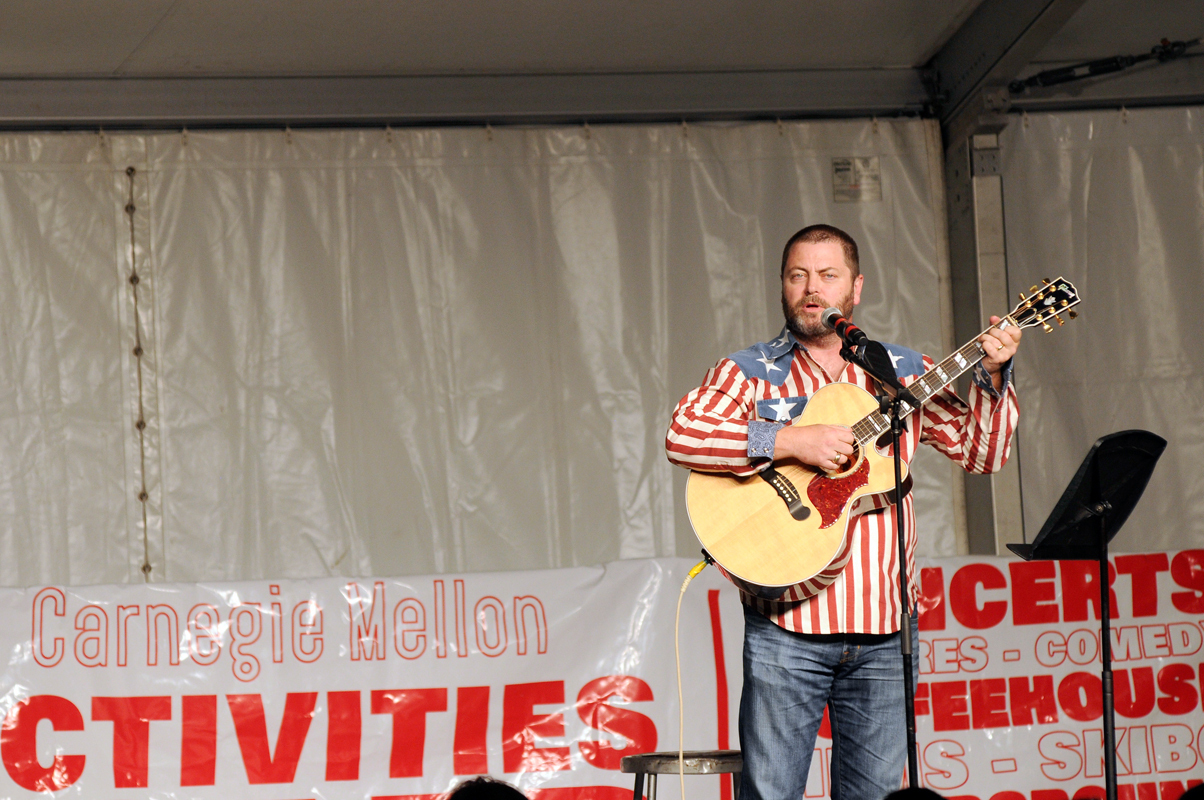 The Midway tent was packed last Thursday night, with many who couldn’t get tickets lined up in the back, in preparation for the annual Spring Carnival comedy performance. This year, CollegeHumor.com comedian Streeter Seidell opened for headliner Nick Offerman, who is known for his role as Ron Swanson on the television show Parks and Recreation.

While both comedians are big guys with a decent amount of facial hair, their styles are very different. This contrast between the acts made for an excellent comedy show.

Unsurprisingly, Seidell’s comedy rested on college life and issues. From the “Freshman 15” — for four consecutive years, in his case — to the perpetual sickness that many college students suffer from, his humor appealed to the audience. His observational jokes were full of insight on the life of a college student.

There were times when Seidell strayed to the gross and vulgar side (particularly with descriptions of naked old people in the campus locker room), but even then the crowd was overcome with laughter. At times his formula and material seemed borrowed from articles and videos on CollegeHumor.com, but the crowd of college students enjoyed it (no doubt a reason for the website’s popularity). Overall, his performance was consistently funny. He could have very well been the main performer if his routine had gone on longer.

After Seidell wrapped up his portion of the show, Offerman’s entrance truly riled up the crowd. Shirtless and wearing a Booth hardhat, he leaped on stage, stretching his leg against the back rails. This, along with him buttoning up his patriotic shirt adorned with stars and stripes, made for an excellent introduction into his act.

The performance involved lots of humorous moments that only Offerman could bring to Carnegie Mellon. His deadpan humor was present throughout the performance, which centered on of his “Ten Tips for a Prosperous Life.”

Offerman made a point to separate himself from the character of Ron Swanson while still exhibiting the kind of humor he is known for on Parks and Recreation. He discussed his personal life often, with tales of his wife of 12 years, actress and comedian Megan Mullaly. His show was interspersed by comedic songs played on guitar, a talent fans were most likely unaware of prior to his performance.

Throughout the show, Offerman built his credibility with the Carnegie Mellon crowd in an unexpected way: He demonstrated his vast knowledge of the book series Lord of the Rings. While initial references to hobbits weren’t incredibly nerdy, the deeper comparisons between David Bowie and Elrond and the mere mention of lembas bread showed a side of Offerman that wasn’t expected, but was appreciated by the audience.

However, there were times when the show seemed to drag on. Noticeable gaps without any laughter populated the latter half of the show. This may have been a side effect of framing the show with the “Ten Tips for a Prosperous Life.” However, it clearly contrasted with Seidell’s shorter yet more consistently funny performance.

But where Offerman lacked comedic stamina, he made up for it with heart. The show felt like it wasn’t merely a standup routine, but truly a message he was trying to get across to the crowd of Carnegie Mellon students. Behind the laughs and songs, his advice was something to learn from.

It may not have made for the best comedy show, but Offerman’s performance still affected the audience strongly. The seventh of his ten tips, “Avoid the Mirror,” was particularly powerful. He stuck on the point, “If you have a body, you’re beautiful. If you have a nose, you’re beautiful.” After repeating this sentiment a few times with great sincerity, a girl in the audience was overheard saying that she was going to cry.

The comedy show at Spring Carnival featured two hilarious comedians. Through his ability to relate to the audience, Seidell had the audience consistently laughing. Offerman maintained the style of humor he was known for without being pigeonholed as Ron Swanson. The contrast between the performances enhanced the overall experience, creating a memorable show that will be hard to top in years to come.