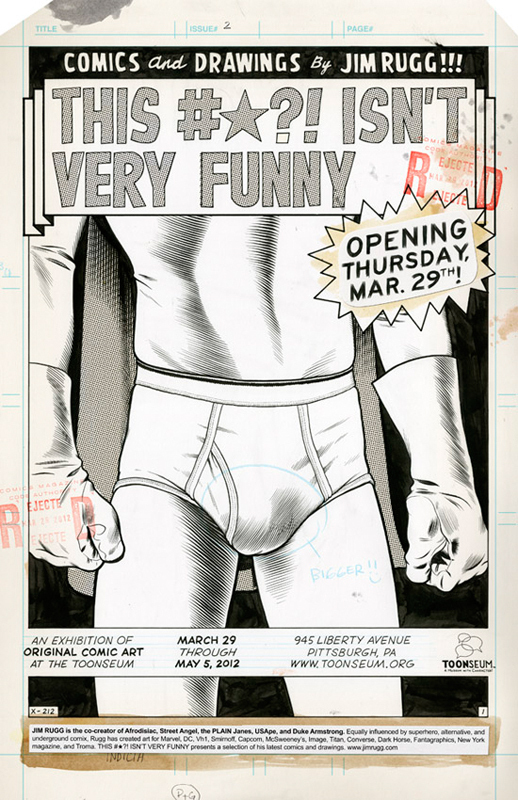 Jim Rugg is a Pittsburgh comics powerhouse. His contributions to the vitality of the comic scene have included mini-comics, self-publishing, and creator-owned work with independent publishers. It’s no wonder the ToonSeum is honoring the contemporary cartoonist and working artist through the month of May with its exhibit, This #*?! Isn’t Very Funny.

This #*?! Isn’t Very Funny features Rugg’s well-known work on Street Angel and Afrodisiac as well as new and seldom-seen pieces. This is Rugg’s first solo exhibition and a first for the ToonSeum, as the exhibition reflects the more adult sensibilities of the comic world. Most of the pieces exhibited are recent, shorter pieces originally made for anthologies and newspapers, dating from after the completion of Afrodisiac. Much of the pieces are directly inspired by original production art of the 20th century, the often-discarded line art that was produced for the sake of reproduction.

While it’s safe to say that the idea of comics in fine art galleries has found its place in contemporary art criticism, it is still unclear how a viewer is intended to engage with comics in a gallery environment: whether one is supposed to pay respect from a distance or inspect the minutiae in search of the human touch. While both are valid approaches, they go against the cognitive escape afforded by the traditional private experience associated with comics.

As such, contemporary artists are asked to present their work either as fine art or as comics. It seems that they must determine whether the focus will be on the art or the narrative. When facing this dilemma, artists feel they must choose. In This #*?! Isn’t Very Funny, Rugg bravely provides solutions to this forced dichotomy.

Rugg approaches the puzzle of exhibiting comics in a museum by creating art specifically for the gallery environment. By drawing single large panels, the comics fit within the traditional framework of a painting, and by allowing his panels to feature characters drawn at different sizes, he can create an unparalleled sense of depth. As a viewer gets closer, smaller details make themselves apparent.

A noticeable example of this practice is Rugg’s use of word balloons of different sizes within individual panels. The word bubbles’ varying sizes invite the viewers to get closer, if they want to read the text. In this way, Rugg consciously designs his work so the audience engages with it in the gallery space and so the work can confidently straddle the seeming divide between comics and fine art.

It’s important to note that while it’s safe to label Rugg as a pop artist, his work does not exhibit the intrinsic post-modern detachedness of Andy Warhol and Roy Lichtenstein’s mid-20th century work. His work has real heart. As he describes on his website, Rugg seeks to “reconcile pop culture’s adventurous promise with the realities of the world around [him]” and he “[uses] the style and visual vocabulary of cartoons to question and lampoon consumer culture.”

Rather than communicating solely through abstract notions of color, line, and form, Rugg expresses his visions and communicates in the language of our collective, mass media-constructed childhood memories. That image language is his pop. Rugg uses comic tropes in unexpected ways: narratives advanced through fragments, covers for nonexistent stories, or sketched splash pages.

“I live in a complex world of race and gender roles, politics and religion, suburban isolation and the confusion of middle age,” reads Rugg’s artist statement on his website. “In my artwork, I bring these realities to bear on the once-safe world of escapist entertainment and attempt to understand the values of the world around me through India ink, steel pen nibs, sable-hair brushes, and pixels.”