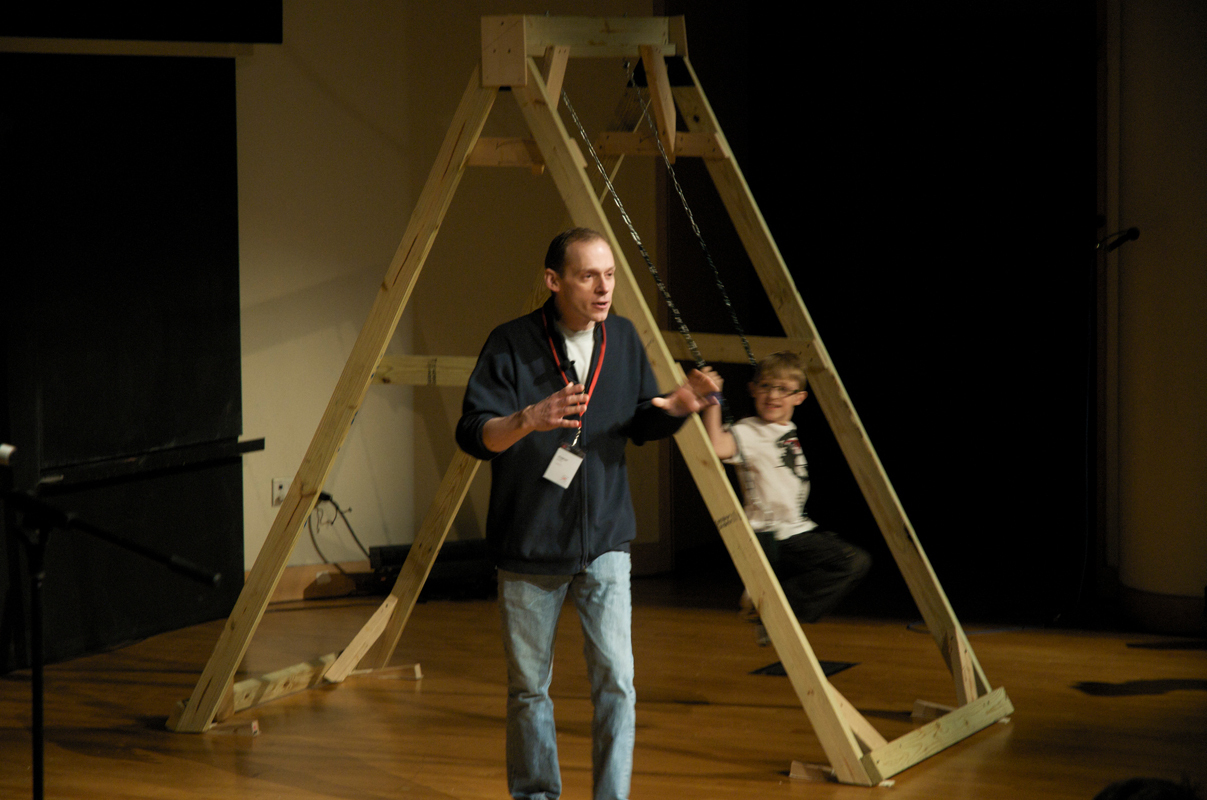 Stephen Neely, an artist lecturer in eurhythmics, pushes his 9-year-old son on a swing. According to Neely, the motion of a swing is much like the (credit: Jennifer Coloma/Staff) 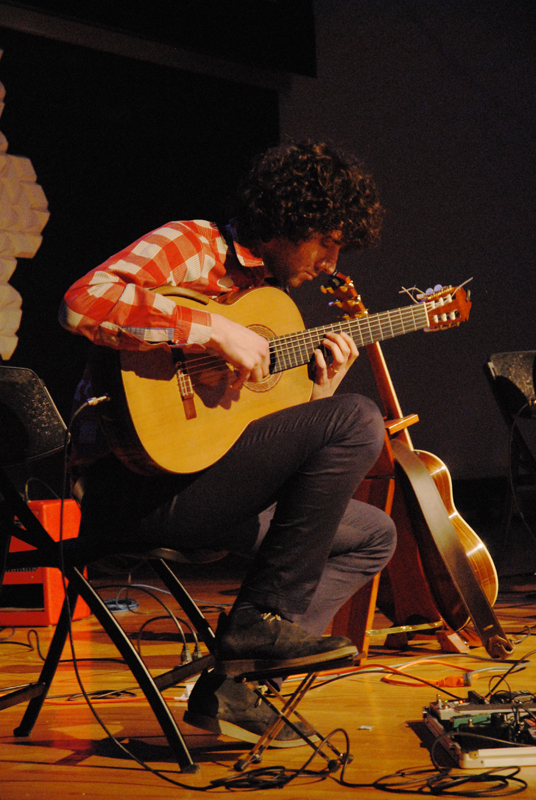 Geremy Schulick, half of classical guitar duo Threefifty Duo, plays in front of a series of films projected on a backdrop. (credit: Jennifer Coloma/Staff)

TEDxCMU presented at Carnegie Mellon for the third year in a row this past Sunday in McConomy Auditorium. TEDx stands for “independently organized TED event” and its goal is to share “ideas worth spreading.”

Every year, the event brings a diverse range of speakers presenting their own take on TEDx’s theme. This year, the theme was interpretation.

“We have a much higher variety of speakers this year,” said senior computational biology major Judith Savitskaya, the head of publicity for TEDxCMU. “Some of the criticisms that we’ve got in the past is that speakers kind of gather around the same subject, but this year we’ve tried to really diversify.”

Savitskaya said that the speakers were chosen based on whom TEDxCMU team members were interested in. “It was a lot of individual interest, but we have a very diverse team. So we kind of used that to our advantage,” she said.

Junior guitar performance major Jeesoo Sohn, TEDxCMU’s president, said, “I told my team, ‘Who are your biggest inspirations in this world? Who do you look up to? What blogs do you read?’ Obviously, they had to be connected to Carnegie Mellon or Pittsburgh.”

Each of the chosen speakers had something to share with the audience. Imam, an innovator and entrepreneur, shared the concept of engineering luck for oneself. Ogle, a lifestyle entrepreneur, went over the differences between what he called the “Traditional American Dream” and the “New American Dream.” Ogle explained that people prefer unhappiness over uncertainty — uncertainty of what they want, of how to get what they want — and so they stick to the “Traditional American Dream” of getting a job, having 2.5 children, and having the perfect house with a white picket fence.

“Ask yourself one thing: What do you want to do with your life?” Ogle said. “I know this is the cheesiest thing, but there are only seven days in a week, and ‘some day’ is not in it.” Ogle argued against not going after what you really want merely because of uncertainty.

Neely, an artist lecturer, used a swing set and piano onstage during his talk. Neely had his son swing while he made an analogy of how the motion of a swing is similar to the motion an orchestra conductor makes while conducting. Neely then played the piano as the audience conducted.

The general purpose of his talk was to convey a simple message: “The artful experience is something to aspire to,” Neely said. “It’s something that’s to be dynamic, to be experienced, and you have to figure out what is the role in that, and how are you able to find that experience.”

Erik Pintar, first-year electrical and computer engineering major, said he liked Neely’s talk. “The connection he made about the swinging and the music: It helped connect a very natural moment in childhood to what we see as something so sophisticated,” Pintar said. “When the beauty really comes from natural movement.”

In the three years of TEDxCMU’s existence, Sohn said that the event has grown a lot. According to Sohn, TEDxCMU received over 1,100 applications from people hoping to attend TEDx this year, more than double McConomy’s capacity. She said that this year’s TEDxCMU team is twice the size of last year’s.

Pintar said that he had “watched a bit of TEDx” online before and that they were “all really interesting and inspirational and helped transform knowledge and ideas into meaningful experiences for others.”

He heard that TEDx would be occurring on campus through his adviser. “As soon as I saw it, I had to go,” Pintar said.

Meanwhile, Kyra Ceceris, a research and development engineer, learned about TEDxCMU through PopCity Online. Ceceris, like Pintar, had seen the TEDx videos online, but she had never seen them live before.

“I thought it would be a good experience [to come] since they’re in Pittsburgh,” Ceceris said. “I enjoyed it ... [but] since I work for biotech, it would be interesting to see something related to science.”

“When people come to any TED event, they’re excited about listening to that one speaker,” Sohn said. “I think most people learn most from the ones they weren’t excited about. It’s important to keep an open mind.”

All of the TEDxCMU talks from the past three years are available online to watch for free at tedxcmu.com.