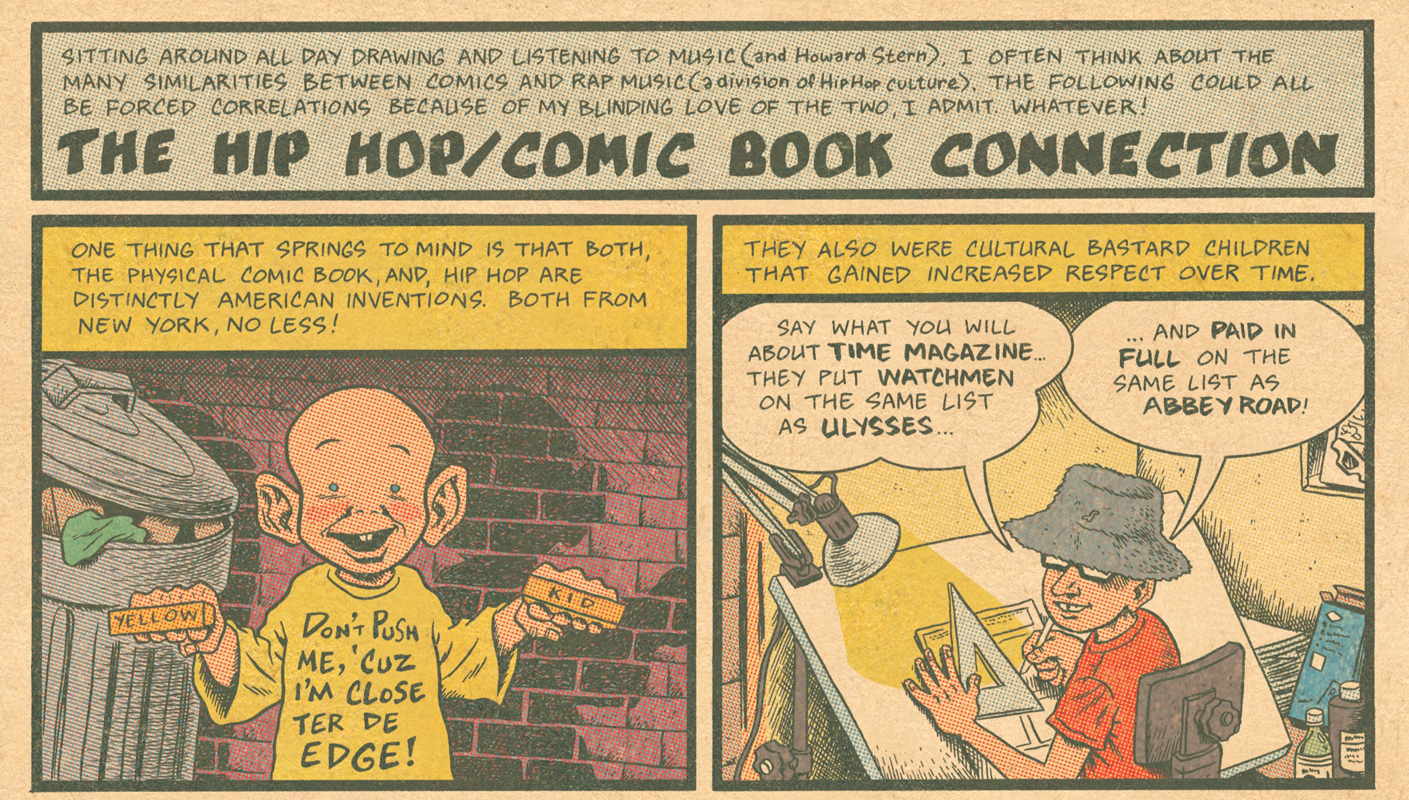 Unbeknownst to many, Pittsburgh has a vibrant independent comics scene. With over seven comics shops and the ToonSeum, a museum wholly dedicated to animation and comics, Pittsburgh is home to a lot of comics aficionados. With homegrown comics anthologies like Andromeda and Unicorn Mountain alongside comics giants like Jim Rugg, Frank Santoro, and Tom Scioli, there’s a lot of ink hitting the page in this city.

In the midst of this community is Ed Piskor. A workhorse of a cartoonist, Piskor has made great strides in the world of professional comics over the past seven years and has opened up this medium for storytelling. Piskor’s comics tell a range of stories, from the passions and politics of hackers to reflections on life in Cleveland to the borderline biblical history of hip-hop culture.

Piskor was born in the city of Homestead, Pa. in 1982. Piskor said that money was tight growing up, but pencils and paper were easy to come by. Determined to pursue a future in comics after high school, he made his way to the Joe Kubert School of Cartoon and Graphic Art, where he studied the ins and outs of comics creation.

He has been a professional cartoonist since 2005, having entered the world of publication by collaborating as an illustrator with comic book writer Harvey Pekar for his American Splendor comics. Their collaboration continued as they worked on two subsequent graphic novels: Macedonia, the story about the travels of a peace activist, and The Beats, the story of the generation that opposed mainstream American conformity and conservatism.

After the collaborative work, Piskor began to focus more on working solo — writing, penciling, lettering, and inking his comics himself. As a cartoonist, Piskor has found a writing style that appeals to unique audiences. His recent works include_ Brain Rot_ and Wizzywig, which is the story of Kevin “Boingthump” Phenicle, a young prodigy who becomes fascinated with social engineering, phone phreaking, and computer hacking. Piskor has engaged audiences outside of comics’ traditional demographic by writing about these unusual topics and using the internet to expand his fan base.

While Piskor was creating Wizzywig, he would regularly post the story online for fans to read. The work caught on with technophiles; Piskor was suddenly invited to technology conventions like The Next HOPE (a Hackers on Planet Earth convention) and was given the opportunity to speak at hackerspaces.

More recently, the “Hip Hop Family Tree” segment of the Brain Rot series has been developing a highly interactive online fan base. Little-known figures in the history of hip-hop culture, like DJ Disco Wiz, have been getting in touch with Piskor via Facebook and responding to his historical depictions of the 1970s hip-hop world. When asked about the purpose of the “Hip Hop Family Tree,” which traces the history of hip-hop culture, Piskor laughed and explained that this sprawling project is just an excuse to put the family tree flowchart together.

“If you really get into the old records and the music from the beginning,” Piskor said, “throughout the years you can draw these very clear lines between each generation. It is almost like the Bible. Grandmaster Flash begat Grandmaster Melle Mel, Kool Herc begat DJ Disco Wiz ... and so on.”

Piskor is often asked what kind of research he does for his historical stories. He responds seriously that “to say ‘research’ makes the work seem like a homework assignment.” As he sees it, he has been building on his memory bank of knowledge since he was a kid. If he has to delve further than his own knowledge in order to fully tell a story, he never sees it as researching but rather as “reading for pleasure.”

To keep himself drawing, he incorporates his passions into his current projects, personal or professional. For example, when he became curious about the worlds of verboten information, hacking, and breaking systems, he wanted to delve deep into them so as to understand the nuts and bolts. In order to justify the time and energy needed to reach this level of comprehension, he made Wizzywig, a 300-page comic. “I feel like a slacker if I’m not working constantly,” he said.

Although his approaches to the creative process might seem extreme and obsessive, Piskor’s tireless work in communicating his learnings through comics provide his readers with portals into curious worlds.