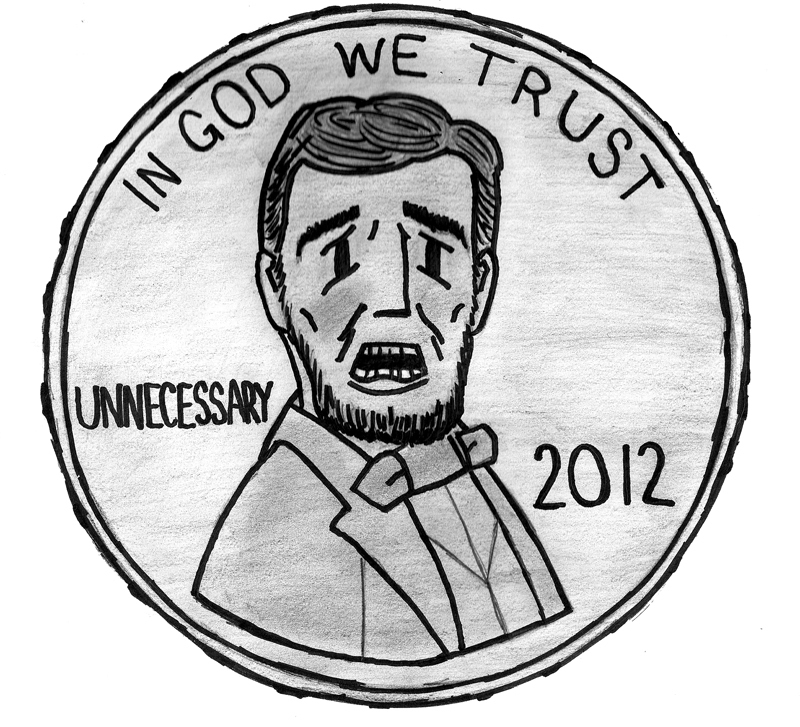 Clinging to penny’s existence makes no sense. (credit: Josh Smith/Forum Editor)
Editorials featured in the Forum section are solely the opinions of their individual authors.

President Barack Obama recently asked Congress to find a new metal mixture for the production of pennies and nickels. This was a response to information released by the U.S. Mint that it cost the government 2.4 cents to produce a single penny and 11.2 cents per nickel as of February 2012.

While there may be economic benefits to finding a new metal mixture for the nickel, the same cannot be said for the penny. The government should simply discontinue the penny altogether.

The U.S. Mint stated that approximately 5 billion pennies were produced in 2011.

At 2.4 cents per penny, the cost of creating these coins was undoubtedly expensive. Even if a new mixture for the coins were found, the time and administrative cost alone that is necessary to produce the penny would exceed the worth of the coin. With the cost of materials rising, the penny will be even more of a liability next year, even with the possibility of a new mixture.

Even though Time.com writer Josh Sanburn stated in his article “Obama Wants to Make Cheaper Pennies and Nickels” that a new penny mixture could save the government over “$100 million a year,” the net loss for the government would still be large.

Imagine the savings the nation would accumulate if penny production were completely stopped.

The proposal to get rid of the penny is even more enticing when the history of the half cent is considered. Introduced in 1793, the half cent was an integral part of the economy. However, its existence was short-lived — it was taken out of circulation in 1857.

The U.S. economy was not negatively affected by the removal of the half cent, and the absence of the penny would have the same result.

In his USA Today article “Why Keeping the Penny No Longer Makes Sense,” economist Robert Whaples debunks the fears of consumers that purchases would be rounded upward to the nearest nickel if the penny was eliminated.

In fact, the removal of the penny from circulation could actually stimulate the economy.

Whaples claimed that the penny’s absence would save the consumer 0.025 of a cent per purchase due to this method of rounding. With millions of purchases made across the nation per day, 0.025 of a cent could add up to a nice boost for the economy.

With countless pennies placed in “Leave-A-Penny, Take-A-Penny” trays at retail stores and abandoned behind couch cushions each year, it is apparent that consumers and sellers do not care for the penny as a viable currency.

If there are so few who care about its existence and its absence would help boost the economy, there is no reason to cling to this dying denomination.