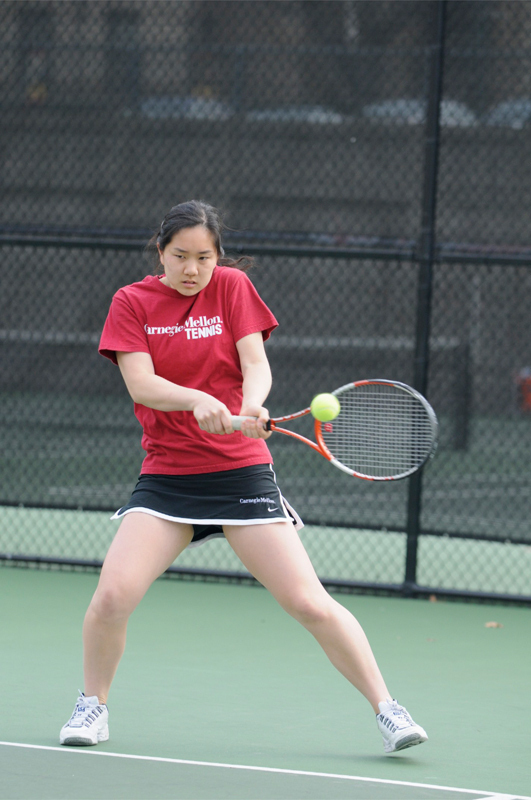 Senior Laura Chen dominated her matches at No. 1 singles and doubles this weekend. (credit: Tommy Hofman/)

The Carnegie Mellon women’s tennis team was victorious against Slippery Rock University, a Division II school, this past Friday.
It was the first match of the season, and the Tartans won with an overall score of 9–0.

Starting with the No. 3 doubles, first-year pair Clare DuBrin and Bryn Raschke came out with a strong 8–0 win.

Senior Laura Chen won the Tartans’ third singles match at No. 1 singles with scores of 6–3, 6–4, solidifying the team’s victory over Slippery Rock.

“It was a great way to start the season,” Chen said. “We look forward to the next couple of matches because they will prepare us for indoor Nationals in a couple of weeks.”

Senior Courtney Chin played a long match at No. 2 singles; she was the last Tartan left on the courts after splitting sets.

Since the match had already been decided in favor of Carnegie Mellon after the 5–0 lead, Chin played a third-set tie-breaker to decide her match. Chin ended with scores of 6–7, 6–4, and 10–3.

“Everyone has been working really hard in practice so far this spring, it was great to finally get out and play some external competition,” said head coach Andrew Girard. “There are a couple kinks that we need to work out here and there, but overall a very solid performance for our first match of the spring.”