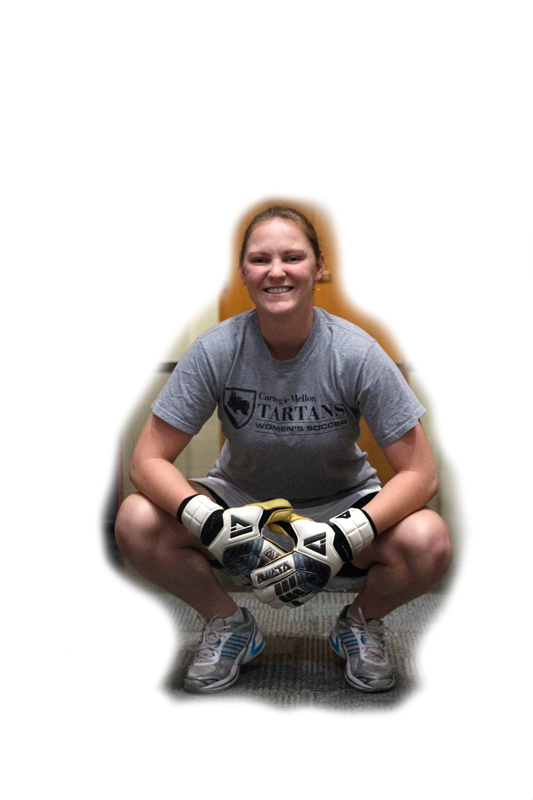 Anna Albi had nine shutouts this season and 14 in her career. (credit: Jonathan Carreon/Photo Editor)

The Tartans had a groundbreaking season this year, making the “Elite Eight” in the NCAA Division-III Tournament and finishing with a remarkable 14–1–5 record. The team also boasts many individual and coaching awards.

The winning record is a significant improvement from previous years, as the Tartans set a school record with 14 wins this season. When Albi was a first-year, the team was ranked last in the conference.

“When we talked about our goals, we always would say it would be nice if we got there, but it was a dream come true when we were actually in it,” Albi said. “We worked hard and finally got there.”

“Anna was a crucial member of the team, an anchor, and we wouldn’t have gotten as far without her,” said senior captain Stephanie Hare. Albi was named the University Athletic Association’s Women’s Soccer Defensive Player of the Week three times this past season to add to her list of accolades from previous seasons. Albi earned the award for her performance in the third round and quarterfinal of the NCAA tournament.

In the team’s tie against Emory University, Albi recorded her ninth shutout of the season and set a new school record for 14 in her career. Albi also made five saves over Wheaton College and five in the tie against Emory. She finished the season giving up just eight goals and recorded an average of .41, which is the second best in Carnegie Mellon history.

“The 300 fans that were there were chanting my name. It was simply incredible,” Albi said.

“It was nice to get the [UAA] recognition also,” Albi said. But always putting her teammates first, she said, “it also reflected a lot on the great defensive players we have.”
Hailing from Cincinnati, Ohio, Albi is a veteran of the sport of soccer, having played on teams since she was three years old. “I’ve been playing since they would tell us that the goal box was a mouth and the ball was a gumball that needed to go into the mouth,” she said. “Soccer is an incredible sport. I just love the team and that rush when I make a great catch.”

Albi said that Carnegie Mellon’s soccer program is “a perfect fit.” For Albi, it offers “the best of both worlds,” combining a challenging academic environment with a very competitive Division-III soccer program.

Albi is currently a creative writing and professional writing double major who wants to graduate early and attend graduate school at Carnegie Mellon. She would have the opportunity to compete for another year.

“Assuming that I’ll be on the team another year, then our goal would most definetly be to make it back to the Elite Eight,” Albi said. “It will be challenging because we are losing a bunch of our starters, but I believe we can do it again.”

Albi emphasized the unity of the team as the key factor in the team’s success. “We were united under one goal and one drive. Everyone worked their butts off together,” she said.

From meals before home games to traveling across the country, the common theme for Albi is consistently “team.”

“Our coach describes our team to recruits that come visit as a ‘family,’ and that’s exactly what we are,” Albi said.

Her teammates believe that Albi was a key factor in the team’s unity, bringing people together with her leadership qualities. “One of our main goals was to become more of a team, and I think that Anna really helped us unify through her positive attitude, spirit, and personality,” Hare said.

Albi recalls the team’s trip to New York City to compete against New York University, where Coach Yon Struble had the “family” play a trivia game where the winner received an envelope that had tickets to the Broadway musical Wicked in it. Needless to say, screams and excitement ensued.

“Out of millions of memories, that would have be my favorite,” Albi said. “I smile whenever I think about it.”