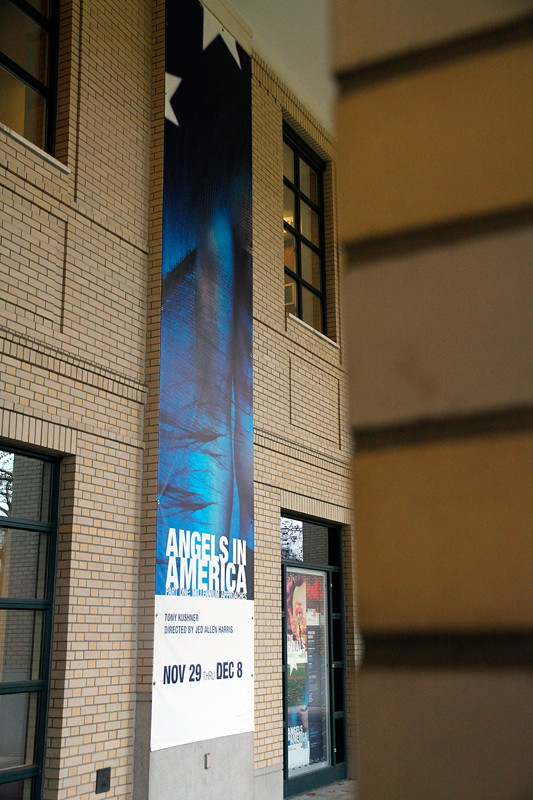 The ongoing School of Drama production of Angels in America will run at the Purnell Center for the Arts through Saturday. (credit: Jonathan Carreon/Photo Editor)

That thought nags at the back of the audience members’ minds from the moment they sit down and gaze at the vastly empty set for Angels in America Part One: Millennium Approaches, and it slowly edges its way to the forefront until the final scene, when the world comes crashing down.

In 1980, immunologist Andrew Saxon and his team at University of California, Los Angeles published a report on what would later be recognized as the AIDS epidemic. The report wasn’t taken up by the Centers for Disease Control and Prevention (CDC) until 1981, and by then the virus now known as HIV had spread rapidly, especially in the gay male community.

The Pulitzer Prize-winning, two-part play Angels in America: A Gay Fantasia on National Themes premiered over the period of 1991 through 1993. It chronicles the lives of people living in New York City in 1985, when the AIDS epidemic was belatedly coming into the public eye. This was still two years before the government would even acknowledge the epidemic — and by that time, more than 25,000 people were dead.

And yet, Angels in America isn’t about AIDS — it’s about what it means to be human. Existentialism, justice, love, faith, hope, money, bureaucracy are all laid bare, debated, realized, and misconstrued by the play’s characters.

The story narrows in on two relationships in turmoil. One is between Prior Walter (senior musical theatre major Trevor McQueen-Eaton) and Louis Ironson (senior acting major Jesse Carrey-Beaver), who panics and feels he must leave his lover after finding out Prior has contracted AIDS. The other couple, Joe and Harper Pitt (played by senior acting major Adam Hagenbuch and senior musical theatre major Emily Koch, respectively) struggle with their secrets, a challenge exacerbated by the fact that Joe wants to move to Washington, D.C. for a job.

The show’s playwright Tony Kushner preferred a transparent staging, with minimalist sets and quick scene changes, and for the most part, director Jed Allen Harris — associate teaching professor in the School of Drama — stayed entirely faithful to this concept. The vast stage was treated as a blank canvas, in which various settings could glide during scene changes. There were no blackouts in this production; instead, the stage lights all turned red, a nod to the color of AIDS relief.

Staging and even plot aside, Millennium Approaches shows its true colors through the relationships between the characters, through their intricate webs of thought processes and morals. Therefore, not only must all the actors be tremendously skilled, but they must also serve as foils to each other. Luckily, this production boasted some of the most solid acting the School of Drama has exhibited in the past two years.

McQueen-Eaton was an obvious standout. Prior struggles with the disease for the play’s entirety, and often his pain is difficult to watch. But McQueen-Eaton had an astounding ability to retain Prior’s stoicism even when he was screaming and convulsing, and the audience didn’t dare look away.

The acting talent didn’t stop there. One could see Carrey-Beaver thinking as he portrayed the paranoid Louis, staying true to his character in that respect, and his performance was a methodical one. Roy Cohn (senior acting major Brian Morabito) is a raucous, scheming thunderstorm of a man, based on the real-life McCarthyist lawyer of the same name. Morabito at first brought a lazy, laid-back quality to the character, but this persona was peeled away like old wallpaper throughout the play, culminating in his collapse in Act Three. Joe’s mother Hannah Pitt, played by senior musical theatre major Casey Anderson, also has a formidable disposition, but she’s onstage for too short a time to fully develop an individuality.

It is Koch who truly stole the show as Harper Pitt, the Valium-addicted, agoraphobic, Mormon housewife. She learns most of what she knows from radio and television programming and spends much of the play in a hallucinatory state. Her emotions seem more realistic than anyone’s in the play — even more than Prior’s — and she maintains a perfect combination of comedic wit and great anguish.

The other two most memorable performances, however, were done by the same person: Senior musical theatre major Rodney Earl Jackson, Jr. played both Prior’s best friend Belize and Harper’s imaginary travel agent, Mr. Lies. What’s astounding is that Jackson brought such depth to both characters, even when he had to make costume changes in under a minute.

It’s difficult to think of any criticism for these phenomenal actors, but there could be some improvements. Senior musical theatre major Imari Hardon expertly juggled her many roles — she serves as a homeless person, a sassy nurse, and an angel — but as a result, she didn’t sink into any one of them. Hagenbuch was almost as convincing as Joe Pitt, a deeply closeted Mormon man with staunch morals. But when it finally comes time for him to be emotional, he seemed too reserved and controlled. A fun side note, though: He played Patrick’s pot-dealing friend Bob in The Perks of Being a Wallflower.

The School of Drama is only performing Part One: Millenium Approaches. To make up for the incomplete storyline, the cast performs a comedic 15-minute version of the five-act Angels in America Part Two: Perestroika in the Purnell lobby after the show. Also in the lobby was a table with fliers and information about LGBT and AIDS-related organizations and events in the Pittsburgh area.

Millennium Approaches continues through Saturday. You don’t want to miss this top-quality production of one of the most important plays in recent history.