As his term ends, Cohon looks ahead 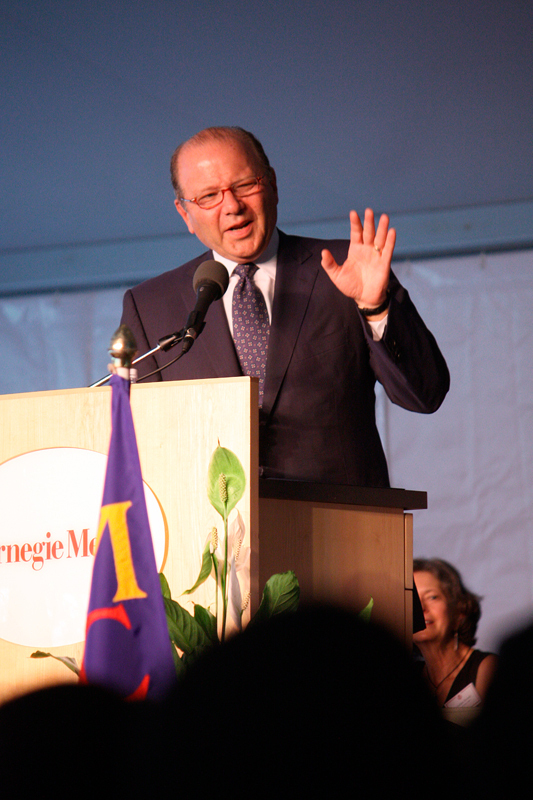 Jared Cohon, president of the university, discussed the presidential turnover and the status of Carnegie Mellon’s international campuses during one of his final town hall meetings last Tuesday.

The event was held in Rangos 2 and had approximately 80 attendees, a large increase from past years.

Students and faculty were invited to submit their questions ahead of time. Almost all of the questions pertained to the upcoming presidential transition.

In response, Cohon said, “I’m not involved in the search,” but described how “the presidential search committee reached out broadly to staff, faculty, students, alumni to find the characteristics people thought the next president should have.”

Cohon said that these responses were then used to create a job description for the next university president and was used to create the list of candidates, which has now been narrowed down to a few final selections.

From there, staff, faculty, and students will be able to interview the candidates.

Cohon’s term as university president is set to expire in June, but the new president is scheduled to be selected by March, providing some overlap in leadership.

Cohon said that the institutional master plan, which was recently approved by the city of Pittsburgh, was “a very good one, an exciting one,” adding, “We’ve acquired a lot of land.”

He said that while there were no concrete plans yet, a mix of academic and commercial buildings (such as the Collaborative Innovation Center) can be expected, with talk of a hotel or retail store being added.

The goal of these increased real estate acquisitions, Cohon explained, is to make the rectangle formed by Forbes Avenue, Morewood Avenue, Craig Street, and Fifth Avenue to be part of campus.

Cohon fielded questions concerning the Morewood parking lot being turned into structured parking, acknowledging that the higher cost of a parking garage will have to be spread evenly across parking locations, being sure to emphasize that University parking operates on a break-even system.

“Yes, we know that’s the site for Spring Carnival,” Cohon said, adding, “I’m really glad the next president has to deal with that.”

Cohon discussed Carnegie Mellon’s international programs, saying that, “Qatar has already expanded this year” with a new undergraduate biology program that the university has created in partnership with Cornell University. “We never thought we’d be teaching biology there,” he said.

The university has almost reached the end of its 10-year agreement with Qatar, but it is set to renew if no changes are made.

Cohon moved on to mention successes with Carnegie Mellon’s California program and the Heinz College’s Australian program which had originally faced demand issues, but thanks to “creative and aggressive efforts” is now doing well.

Addressing the campus in Rwanda, he said, “Rwanda is off to a good start academically, but the neighborhood they’re in is flaring up again,” referring to conflict in the bordering region of the Congo, which is embroiled in a conflict with a Rwandan-related rebel group.

Cohon insisted that the university was assured of the safety of its students and staff, of which there are “26 outstanding masters students; all but two or three are Rwandan, with the others from Kenya.”
The new graduate program in China and a pilot undergraduate engineering program in India were also briefly discussed.

On the subject of Carnegie Mellon’s international involvement, assistant vice provost for undergraduate education, Stephanie Wallach, asked a question regarding the university’s reaction to “Qatar supporting the terrorist group Hamas.”

Cohon responded by giving a brief background on Qatar’s role in the Middle East, reassuring that “it doesn’t affect us directly unless we want it to.”

“We feel that the most important thing for that region is a Western-style education. We are part of the solution,” he said.

With regard to the university’s financial outlook, Cohon said, “We’re in very good position.” But he expressed fears about the effect of the national fiscal cliff on research funding that would be available to the university.

“Our endowment continues to be small,” Cohon said, but he said that it is getting better due to fundraising such as the Dietrich gift, whose “contribution to the endowment hasn’t been felt yet.”

On the subject, Jennifer Keating-Miller, the Associate Director of Undergraduate Research and National Fellowships, inquired about continued investment in existing Pittsburgh programs in contrast to the university’s expansion. “We’re in a better position to meet [funding requests], but that’s relative; we’ve never had enough discretionary funds,” Cohon responded.

The forum was sponsored by Staff Council. Jeffrey Harris, the chair of Staff Council, said, “Staff Council sponsors this event as an opportunity for the Carnegie Mellon community and President Cohon to speak candidly.”