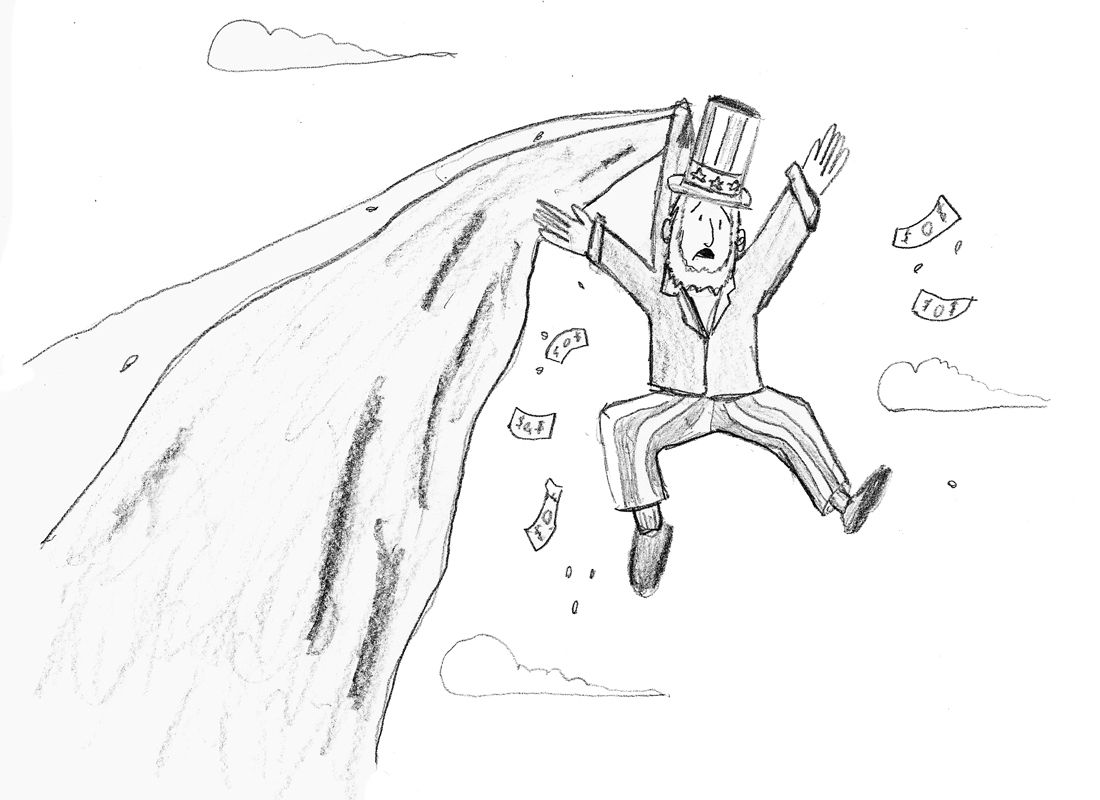 For those of you who don’t know, the U.S. is currently facing what the Congressional Budget Office has determined to be a 1.3 percent Gross Domestic Prouct (GDP) contraction for the first half of 2013 as a result of the so called “fiscal cliff,” a combination of tax increases and spending cuts designed to reduce the deficit.

This contraction would be the textbook definition of a recession (six months of negative GDP growth) and would do a number on our stagnating economy. Republicans and Democrats alike agree that we should avoid driving off the fiscal cliff so these negative effects are avoided, but disagree strongly on how to do it. Here is a three-step solution to avoiding the fiscal cliff and making government make sense.

First, pass further legislation for a fair tax. The fair tax essentially scraps all existing taxes, the IRS, and the 16th Amendment, which allows income taxation. It replaces these taxes with a two-part system for progressive revenue generation that raises the same amount of cash for the government as the current tax system in zero economic growth scenarios.

First, it levies a 23 percent sales tax on all goods sold in the U.S. Second, at the beginning of every month, each U.S. household receives a check in the mail for an advance rebate of all taxes on purchases up to the poverty level.

This means that if you make the poverty level for the size of your family — $30,260 for a family of four — and spent all of your income, you would get an advance rebate on those taxes paid. This is designed to make the tax progressive, meaning the rich pay more and the poor pay less. According to a report by the Beacon Hill Institute, the fair tax is more progressive, in fact, than the current tax code.

In addition to having innumerable benefits that make government fairer, simpler, more transparent, and just better in nearly every way, it gives Democrats and Republicans their wishes.

Democrats want a more progressive tax system. If the fair tax proved not to be progressive enough, the rate just has to be raised. This increase will make the rebate go up and more taxes will be collected on what is spent. As income rises, the rebate shrinks as a proportion of earnings, making the effective tax rate closer to the actual sales tax rate for the wealthy.

Similarly, conservatives don’t want to raise taxes, and they want tax reform. The fair tax broadens the tax base, putting more income in play for taxation. This allows the fair tax to have a relatively low tax rate while still being more progressive than our current tax system. Similarly, it takes away the government’s ability to create loopholes that many of the wealthy exploit to pay a lower effective rate than they should.

Most importantly, however, the fair tax will create economic growth that will increase tax revenue by putting more money in motion and by creating a more business friendly environment. According to the National Bureau of Economic Research, GDP would increase by 10.5 percent the year after the fair tax legislation was passed.

While catapulting the nation out of recession, the fair tax would raise tremendous amounts of money for the government, achieving the desired deficit reduction effects in a way that satisfies the basic wants of both parties.

Second, we need to fix the way government approaches healthcare. While Medicare and Medicaid have fantastic intentions, they cost a lot of money. According to a report by the Organization for Economic Cooperation and Development, healthcare spending accounts for close to 18 percent of GDP and is growing markedly faster than the economy is.

This means that health spending programs are increasing rapidly in cost as well. Realistically, someone needs to pay this increased cost every year.

Representative Paul Ryan’s (R–Wis.) budget block grants a set amount of money to each Medicare recipient and also grants Medicaid funding to states. The amount that is given rises each year, but not at the unsustainable rate that it has been rising.

While Republicans wanting seniors and the poor to pay more for their healthcare is an easy talking point for Democrats to exploit, the reality is, it makes sense that those receiving the services should help pay.

This would help reduce the deficit by capping our healthcare spending over time. This would allow the finite cost of programs like Medicare and Medicaid to be known well in advance and accounted for. This is also a gradual change that wouldn’t have the immediate negative effect on GDP that the fiscal cliff would.

The last part of the fiscal cliff involves discretionary spending cuts. Often talked about but rarely acted upon, discretionary spending is not that large of a portion of total government spending and cutting it wouldn’t have a very significant impact on the economy. Cutting these programs is necessary if we want to meaningfully reduce the deficit.

These are not mandated spending like social security is, but things like PBS, the Postal Service, and numerous other small projects. Cutting them doesn’t have to mean eliminating them, but just making sure they run efficiently and optimally.

This is already a part of the fiscal cliff, but it could be stretched out to last a few years rather than a few months, and wouldn’t significantly impact GDP.

These ideas are probably not going to be put into place anytime soon, but they show how, with a little creativity and the right attitude, Democrats and Republicans could easily work together and come up with some really innovative ideas that reduce the deficit without delivering the economy a fatal blow.