’Tis the season for a persecution complex 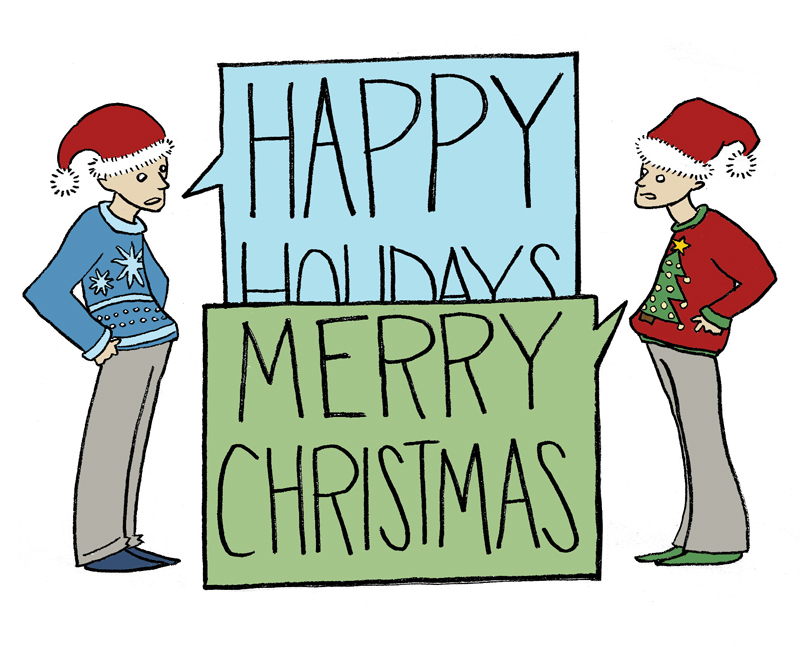 ’Tis the season for a persecution complex (credit: Adelaide Cole/Art Editor)
Editorials featured in the Forum section are solely the opinions of their individual authors.

It baffles me to no end how anyone could view this greeting — an attempt to be inclusive — as an attack, yet during this time of year we are once again subjected to cries of a so-called “War on Christmas.” I for one am getting sick of hardcore Christians complaining that secular Americans are trying to somehow destroy Christmas or otherwise impinge upon the rights of whomever wishes to celebrate it.

Even the nonreligious get annoyed when groups, such as the Freedom from Religion Foundation, attempt to get nativity scenes removed from publicly owned land; they don’t see such scenes as hurting anyone. Now, that might very well be the case, but it misses the point entirely.

Groups like the Freedom from Religion Foundation aren’t bitter grinches trying to ruin everyone’s good time; they’re merely pointing out the Establishment Clause of the Constitution, which states, “Congress shall make no law regarding the establishment of religion or prohibiting the free exercise thereof.”
It is technically illegal for the government, or at the very least the federal government, to promote any one religion over another — or any religion at all.

Certain religious groups try to twist this to their advantage by claiming that secularism tries to limit their free exercise, but this is absurd. Secularism, in fact, promotes the only fair possibility: The public sphere is not explicitly irreligious, but rather areligious. It is not, say, the endorsement of atheism any more than it is the endorsement of Catholicism or Gnosticism.

That being said, Christmas is (for better or worse) actually a national holiday, and nowadays it is pretty much secular anyway. Anyone from Christians to Buddhists can watch Frosty and Rudolph, then rush into a consumerist frenzy — all while enjoying eggnog and candy canes. Those who claim “Jesus is the reason for the season” ought to brush up on their history, just as those who implore us to “keep the Christ in Christmas” are unlikely to “keep the Thor in Thursday.”

Not only were holidays such as Saturnalia, Yule, and Hanukkah — from which we derive most of the noncommercial aspects of modern tradition — celebrated long before Christ’s alleged birth, the Church decided that the Nativity would be celebrated on Dec. 25 as a way to convert pagans who already had rituals associated with that day. This means that, if anything, the season is the reason for Jesus’ “birthday party” being when it is.

With these facts being ever more apparent now, coupled with our increasingly pluralistic society, it should only make sense that people would want to be more inclusive. Yet, as The Daily Show host Jon Stewart put it, some Christians have taken the idea of no establishment as persecution because they feel entitled not to equal status, but to greater status.

They realize that equal consideration for other viewpoints spells the end of the approximately 1,700-year privileged status of their own position.

I would have no real problem if every holiday got equal time in the public sphere, because then the government couldn’t be accused of special treatment. However, considering that there will likely always be a group that feels it isn’t being fairly represented, it is much easier to just set up something like a holiday tree and leave it at that.

The sheer fact that New Years is celebrated within a week of Christmas makes the phrase “Happy Holidays” a necessity even to Christians. What’s more, no one is really saying that Christians shouldn’t be allowed to wish whoever they want a “Merry Christmas.” It’s just that the rest of us should be allowed to retort with a “Happy Festivus.”

It all boils down to what seems to me to be the human need for a year-end festival, a light in the winter darkness. However you want to express that need is your prerogative, provided it doesn’t infringe on others in any way. Thus, I’d like to take this opportunity as a Christmas-celebrating secular humanist agnostic atheist to wish you and yours a happy “whatever doesn’t offend you,” or more simply, “Happy Holidays.”