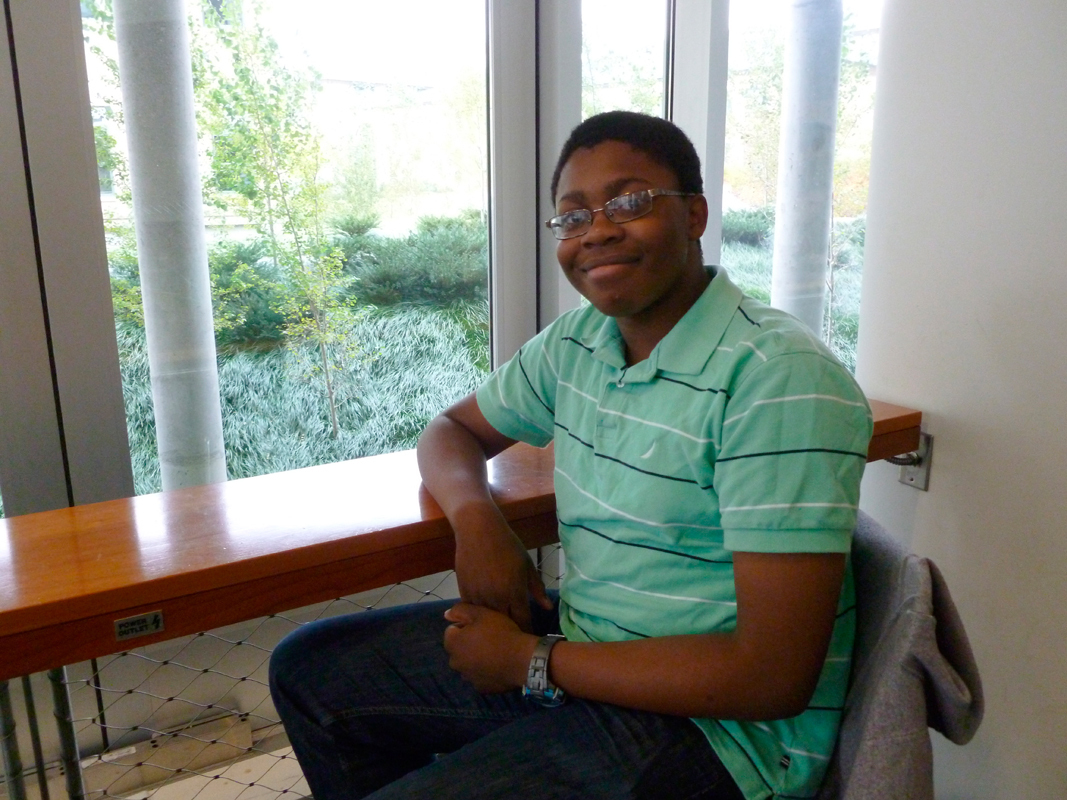 Obawole Idowu, a ‘20 under 20’ Thiel Fellowship finalist, wants to give people who live in areas without electricity access to smartphones. (credit: Jennifer Golda/Junior Photographer)

Carnegie Mellon welcomed two 20 Under 20 Thiel Fellowship finalists into its class of first-years this fall. Obawole Idowu in the Carnegie Institute of Technology and Vijay Viswanathan in the Mellon College of Science spent four days in San Francisco this summer competing for a $100,000 fellowship; the competition is chronicled in the second season of the popular CNBC show 20 Under 20: Transforming Tomorrow.

Although neither won the grand prize, Idowu and Viswanathan still have a lot to boast about. Each has already accomplished more research than many Carnegie Mellon undergraduates in their respective fields.

For his presentation in the Lightning Pitch round of the competition, 15-year-old Idowu said, “My goal is to be disruptive in providing access to mobile technology.” His idea? A self-powering pair of smartphone sunglasses called Soul Aurum. The glasses would use solar array lenses and induction from coils wrapped around the frame, with an alloy that would change magnetic properties in warm climates.

This use of temperature and sun for power would make this type of technology ideal for its target audience: the mobile markets in Africa, Latin America, and Asia, where most of the world’s 1.5 billion people without electricity or internet live.

The topic of self-sustaining, mobile technology inspires Idowu not as a business strategy, but as an opportunity to do something good for the world. The reason he is interested in mobile devices that support the internet is because more people can be connected online and “share their ideas about how they can change the world,” he said.

Allowing those without easy access to electricity to have smartphone devices would provide them with more than just the advantages one takes for granted everyday. As Idowu explained, the benefit of communication is critical for the quality of life.

Such movements could have huge impacts on individuals in fields of business and medicine. Asha Thomas, a senior double majoring in business administration and global studies, agreed. From her three trips to underdeveloped communities in Panama with Carnegie Mellon’s Global Business Brigades, she experienced firsthand the type of environments that would benefit most from technologies like Soul Aurum.

“In all of the communities we visited, they had sparse electricity, if any at all,” she said. “One of the communities did have their few lights running on solar power, so that fact puts me at ease when thinking about the adoption of this technology in the communities.” It’s areas like these in Panama that Idowu hopes to help with further research.

Viswanathan’s research also has large goals. In a presentation he made called “Developing a Computational Model of Blood Platelet Morphology with Fluid Dynamics Applications,” Viswanathan described his work in creating geometric and 3-D computer models of blood platelets.

One of the problems with treating blood platelet disorders is that while much is known about the disorders on a chemical level, little is known about them physically. How they travel through blood is a fluid dynamics problem, and Viswanathan hopes that his 3-D models can help solve it.

One of the most prominent features of his model is its ability to calculate the coefficient of drag on a platelet. Drag is the resistive force of fluid — in this case blood —on a body as it moves; if two platelets have different drag coefficients, it means they have two different shapes. Blood platelets from two people could be different because of the presence of disease or even just from genetic variations.

“I can see a future of medicine which can become ‘personalized medicine’ and that could really save lives, because no two people are the same, and medicine should evolve to meet that,” Viswanathan said. “With simulations, that is much more doable than it is right now, and I believe that with my work, hematological problems dealing with blood issues can be solved in that way.”