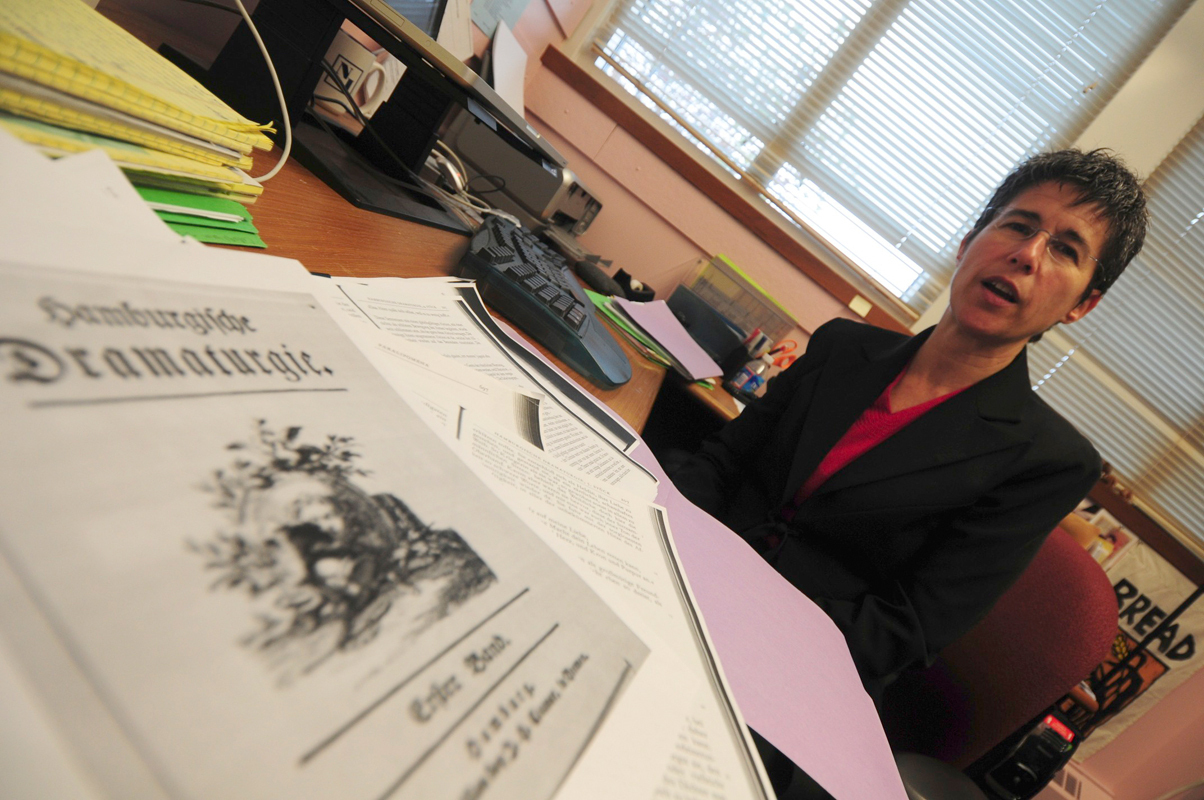 Wendy Arons, associate professor of dramatic literature, is translating the text of German philosopher Gotthold Ephraim Lessing’s Hamburgische Dramaturgie, a project that has gained the School of Drama its first-ever National Endowments for the Humanities grant. (credit: Jennifer Coloma/Operations Manager)

The Carnegie Mellon School of Drama has received its first ever National Endowments for the Humanities (NEH) grant, thanks to the research proposal of associate professor of dramatic literature Wendy Arons and her group of collaborators. The project, which will translate German philosopher Gotthold Ephraim Lessing’s Hamburgische Dramaturgie, is focused on both theater theory and translation, and has significant value in both fields.

Arons and three other scholars from around the country received a grant for $289,697 from the NEH’s Scholarly Editions and Translations Program. According to the NEH website, this program supports the “preparation of editions and translations of pre-existing texts and documents of value to the humanities that are currently inaccessible or available in inadequate editions.” Arons’ project fits this description perfectly, since only an incomplete English version of Hamburgische Dramaturgie is currently available: Not all of the 101 essays from the book have been translated, and those that have are missing significant parts.

Arons, a dedicated scholar of 18th-century German theater, had the idea for the project when a colleague mentioned that the current English translation of Hamburgische Dramaturgie was incomplete. “That was actually a surprise to me at the time ... and that piqued my interest. So at that point, I thought, it really is time for a new translation, and a complete one,” Arons said.

Hamburgische Dramaturgie is one of the most significant historical texts in the dramaturgy field; in fact, Lessing coined the term “dramaturgy,” earning himself the title “the father of modern dramaturgy.”

Hamburgische Dramaturgie also has a fascinating historical context. The collection consists of 101 essays that Lessing wrote during his time with the Hamburg National Theatre, which was created in 1767 by a group of businessmen in Hamburg, Germany. Prior to then, most performances in the area were presented by traveling troupes. “You didn’t have, at that time in Germany, any sort of house where normal, ordinary citizens could go and see the theater any week of the year,” Arons explained. “So they instituted this in Hamburg.”

Lessing, a prominent playwright and dramatist, was brought into the Hamburg National Theatre as a consultant and artistic director, where he spent his time critiquing works. “He wrote essays about and critiqued what he saw on stage, and he used these essays as a way to formulate a theory of what good theater should be,” Arons said.

Lessing’s essays were published over the course of his two years with the Hamburg National Theatre, which dissolved in 1769. It closed for a number of reasons, including the actors’ dislike of Lessing’s public criticism
of the theater. His essays were eventually published together in a book, which, according to Arons, has since “stood as an example of how critical writing can reflect on media and what media does in society.”

Diving into this area of research is natural for Arons, who has researched 18th-century German theater since
she was an undergraduate student at Yale University. “I actually didn’t start learning German until college,” Arons said; before then, she had only read a few translated books and been interested in the culture. While an undergraduate student, Arons studied abroad in East Germany and went on to study dramaturgy and the German language in graduate school at the University of California, San Diego, keeping her research focused on 18th-century German theater.

“It’s an interesting time in history,” Arons said. “It’s the time when everything is changing, when they’re moving from this moment of the actors as traveling troupes who have no status in society to actors as celebrities and as established figures in society.” Arons even wrote her first book on the implications of the transition for women in the 18th century.

Arons and Michael Chemers of the University of California, Santa Cruz, who used to be a colleague of Arons’ at Carnegie Mellon, originally applied for the NEH grant in 2010. Despite a mostly positive response, their first proposal was rejected because it was too huge of a project for just one translator. So Arons and Chemers
decided to bring a few more scholars into the project, getting Natalya Baldyga of Tufts University and independent scholar Sara Figal to join. After reapplying last fall, they were awarded the grant in August.

With the complete group of scholars, the project really began to take shape. They were offered a publishing deal and decided to digitally publish as they went, much like how Lessing published his essays as he wrote them. “In many ways, if Lessing were alive today, he’d be blogging,” Arons said. “We wanted to give him that opportunity to blog.”

Since their goal is simply to make the text accessible to students and scholars, “Our original thought was, ‘Let’s just get this out there,’ because it doesn’t exist. Even the first essay [in the current translation] is missing three sentences. So someone who doesn’t read German immediately doesn’t have access to what he’s really written,” Arons said. To achieve this goal, the scholars will publish the translated essays on mediacommons.org, a peer-to-peer website that allows readers to give feedback on the translations.

“It’s scary because we’re putting our work out there mostly finished, but not completely finished, and people will be able to see our mistakes... but at the same time, we thought this would allow us to make it a better work in the end,” Arons said.

Arons and her colleagues hope that getting feedback as they work will only make their work better and more accurate. Additionally, this back-and-forth between translators and readers is something Arons feels that Lessing would appreciate. “It’s sort of in the spirit in his own way of doing stuff,” she explained. “He got a lot of feedback on his writing at the time, and he loved the back-and-forth. So we thought we’d sort of honor him in
that way, by being brave and putting it out there even though we might be embarrassed by it.”

Arons’ three-year Hamburgische Dramaturgie translation project is significant to both those interested
in translation and those interested in theater theory, a duality that makes the project particularly appealing. “The work can stand for more than just its historical value or its value as theater theory,” Arons said. “It can also stand as an example of how scholarship works in the real world.”