Where does your student activities fee go? 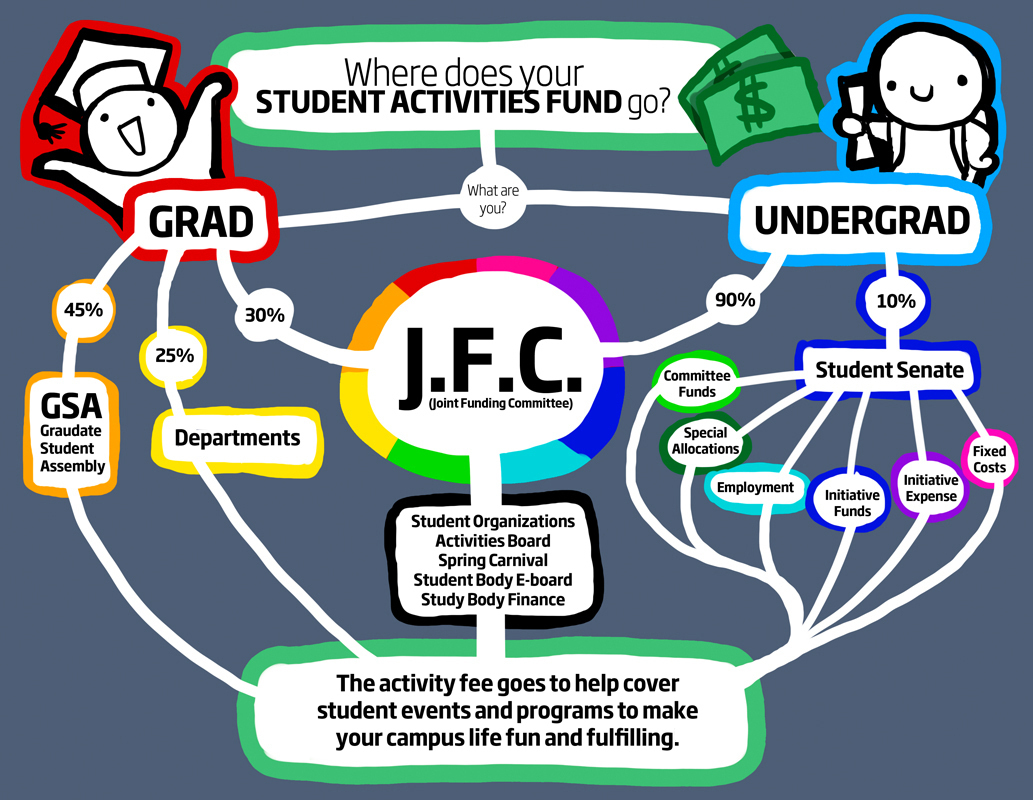 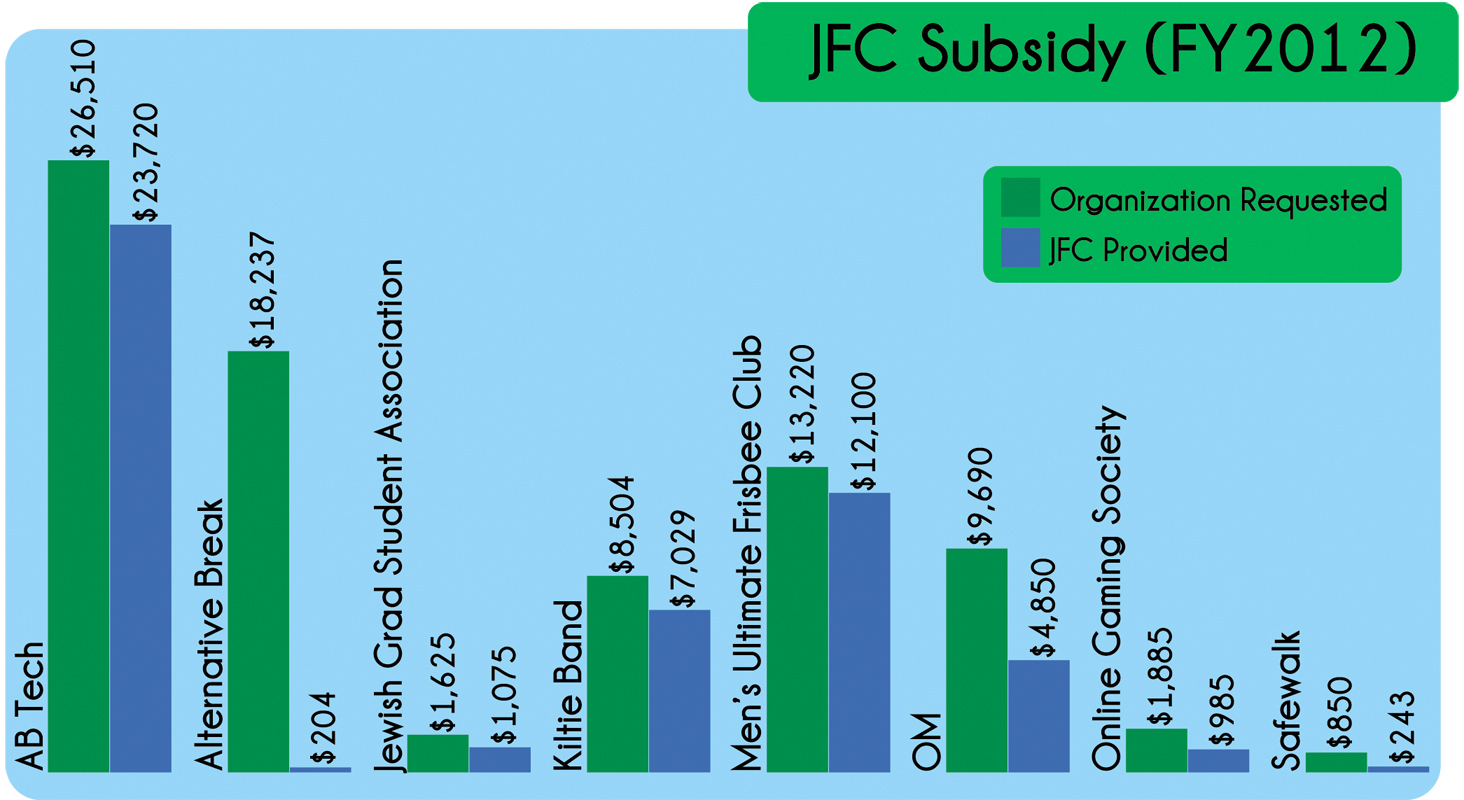 When considering the submitted organization budgets last spring, the Joint Funding Committee (JFC) had to sort through over $1.6 million in requests. The committee only ended up allocating $1.12 million, meaning that it had to tighten restrictions on what could be funded — and one of the costs that didn’t make the cut was spring break trips.

For Alternative Break, a student group that plans service-based trips, JFC’s decision “was a huge blow,” said Sabrina Larkin, the club’s president and a junior chemical engineering and engineering and public policy double major. The organization requested over $18,000 from JFC, but only received $204.

This stretching of resources is the reason that Student Body Vice President for Finance Jon Mark is proposing a $24 increase per semester to the student activities fee. “The programming supported by the fee has essentially outgrown resources that we can give it,” he said at a town hall meeting about the activities fee, held last Thursday. “A lot of these organizations have come up to us and told us that the funding that we’re giving them, considering the rate of inflation [and] the rate of what we’ve been having to cut them, they just can’t keep up, and they certainly can’t grow.”

However, when one considers that the activities fee this year collected over $2.4 million, it raises the question: Where does all that money go?

The source of the money

Carnegie Mellon’s Board of Trustees sets the activities fee every year, taking into account recommendations from student government. The fee is currently $97 per semester. Over the past several years, the fee has increased at an average rate of 2.4 percent. According to Mark, a senior lighting design major, student government has made its recommendations for increases based on the five-year average of the Consumer Price Index, which tracks prices of various household goods in order to measure inflation.

According to its fiscal policy, student government is allowed to recommend up to a 5 percent increase in the fee without needing to call a referendum for students to vote on the increase.

But Student Body President Will Weiner, an economics and statistics and decision science double major, explained at the town hall meeting, “One of our fears last year when we thought about [doing] the 5 percent [increase] is that if you do that over five years, a lot of the students may not necessarily notice. It’s definitely harder to PR that and make sure we’re really reflecting what people want, so I think in terms of transparency and getting the proper feedback all at once, [the 25 percent increase] is a better solution.”

Although the percentage of the graduate students’ fee that goes toward JFC funds is lower than the percentage of the undergraduate fee, the GSA Vice President for Finance Patrick Foley, a Ph.D. candidate in statistics, believes that graduate students do not benefit as much from the organizations on campus. In a survey student government conducted last year, “they asked organizations how many members they had who were grads and undergrads, and then they asked them, ‘In your opinion, do you serve mostly grads, mostly undergrads, or a mix?’ And they also asked, ‘Who do you benefit in addition to the members of your organization?’ ” Foley said. “And what I did was I took the JFC budgets and matched them up to the survey answers.”

At the town hall meeting, Mark said that 30 percent of the participants in organizations were graduate students, but Foley believes that number is not an accurate representation of graduate student benefit from the activities fee.

“My main issue with that is that that 30 percent number doesn’t actually reflect the dollars that come out of JFC,” Foley said. “And if you match up the members or the beneficiaries of organizations with what they’re actually getting, you’ll find that grad students get something closer to like, 16 — or at highest, 20 — percent of the dollars.”

A fee raise would mean more money would go toward GSA; however, research conducted by a member of the National Association of Graduate and Professional Students suggested that Carnegie Mellon’s GSA is already one of the best-funded graduate student governments in the country.

GSA’s budget of $416,631 covers graduate student social events; subsidized tickets for rafting, Kennywood, and movies; funds for graduate students to attend academic conferences; GSA sports teams; and research grants, among other expenses. Andy Schultz, a Ph.D. candidate in materials science and engineering and a current GSA representative, said, “We don’t need more money.”
When asked if he was in favor of the activities fee raise, Foley said, “I can’t speak for all of GSA — and I don’t — but personally, no, I’m not in favor of it.”

Unlike the graduate students’ activities fee, only 10 percent of the undergraduates’ student activities fee goes to Student Senate. Those funds go toward Senate’s various committees (Academic Affairs, Business Affairs, Campus Life, Communications, Finance, and Internal Development), as well as to funding events like Senate Week. Senate also pays for 25 percent of the Arts Pass program, and helps to cover the salary of student government’s application engineer, sophomore information systems and computer science double major Carlos Diaz-Padron, who is responsible for the maintenance and upkeep of student government’s various websites.

Most of Senate’s budget, however, ends up going to student organizations. According to the Student Senate policy, at least 25 percent of Senate’s budget is required to go toward special allocations funding, which provides “financial support for events and organizations that benefit Carnegie Mellon University’s undergraduate students.”

Special allocations are meant to fund events that are new to Carnegie Mellon, costs that arise unexpectedly after budgets have been approved, and groups that are not funded by JFC. This academic year, Senate has set aside over $70,000, 61.4 percent of its budget, to go toward special allocations.

The vast majority of undergraduates’ student activities fee — 90 percent of it — goes into the pool of JFC’s funds. Between the undergraduate portion and the 30 percent from graduate students, approximately $1.12 million is available this year for student organizations. If both activities fee referendums pass in this week’s special election, an additional $314,000 will go toward JFC’s funds.

JFC distributes its funds based on the guidelines in its bylaws; its own decisions on how much the committee will contribute to cover specific types of budget requests, like food or travel expenses; and its impression of how much each organization contributes to the campus community.

The system, however, is not without flaws. “I think that [the JFC process] needs to fundamentally change,” Mark said in an interview. He cited outdated metrics as one problem — for example, JFC only gives $60 per night to cover hotel expenses, but “it’s really hard to find a $60 hotel room and fit four people in it. And that’s the current expectation,” Mark said.

Schultz, who sat on JFC last year, said JFC is “such a big, large process that it’s really difficult to be consistent across all the groups, and it’s really difficult to try and find a way to objectively look at which groups actually serve the community best and deserve the money they’re getting.” He said, “What happens is, essentially for every group — and with very rare exceptions in the last year, this is how it goes — you look at what they’re asking, you look at what their budget was last year, and you cut them down to 5 percent increase.”

Mark also said that JFC’s reliance on previous budgets is flawed. “It makes things really unfair.... Organizations who have historically had large budgets and groups that have not historically had large budgets [are] kind of staying around the status quo.”
JFC’s bylaws also make it difficult for new organizations to grow. Organizations that are applying for a budget for the first time cannot receive more than $500, which, for new buggy team Apex, is far from sufficient.

It didn’t help that they never received guidance from their JFC representative. “Our JFC rep did not contact us one time,” Hayes said. “I reached out to him, and I was never given a response in return.”

Schultz, however, said that there was another reason why the JFC was sometimes ineffective: Some of the larger organizations will ensure that someone from their staff is on JFC, so “there were certain JFC reps [last year] that just didn’t go to meetings, and they were there to speak for their groups” that they were involved in, rather than to help the organizations which they were assigned to represent, he said.

For instance, the Activities Board (AB) — which is technically a standing committee of the student government, rather than a student organization — usually ensures that an AB member is on JFC “that can make sure that they get their money, that can fight in the room,” Schultz said. Last year, one of AB Committee chairs sat on JFC.

Ariel Liu, the executive chair for AB and a senior computer science major, said, “I think that, because AB constitutes a large portion of the budget, that it’s important for JFC to recognize how we use that budget, and if there isn’t someone from AB who is on JFC ... they won’t be able to see all the different things that AB does.”

Mark also indicated that organizations often overspend or misspend parts of their budget, citing an example of one organization that overspent on its food budget by 1,000 percent. One of his priorities is therefore going to be “making sure that groups are really doing what they say they’re doing,” he said. “There should be transparency between the JFC and the people that need to interact with it, so the fact that people feel that they can’t be transparent in order to get what they need to operate, that’s bad. So we need to figure out a way to fix that.”

Given the problems the current JFC process has, “I think JFC needs a major overhaul on the whole process,” Schultz said. While he acknowledged that many of JFC’s problems are “difficult problems” that may not even have solutions, “I don’t see a reason to give JFC more money until they can figure out how to better allocate the money that they have now and [can] actually show that that process isn’t as flawed as it is now.”

But Mark said that through the changes he wants to implement, JFC will be better able “to leverage dollars in a way to create the most impact.” He said he wants to “take a look at the system and do an overhaul first. But especially if we have more money coming into the system, we really need to do this; we really need to look at how we’re doing this and kind of take a step back.”

Larkin is optimistic about the fee increase. “I don’t think it can be a bad thing,” she said. “It doesn’t seem like a lot to me. Our organization in particular, if they can get that extra funding coming in, and the activities fee increase is something that can help along with that, it would make the overall experience much more positive for myself and for all of the participants.”

In the meantime, she is staying positive for Alternative Break’s budget this year. Although the JFC’s cuts were a loss, “we knew that [it would be cut] coming into making the budget, and we’re hoping that we have accounted for that, that we’ll have enough fundraising to make up for that at the end of the year.”