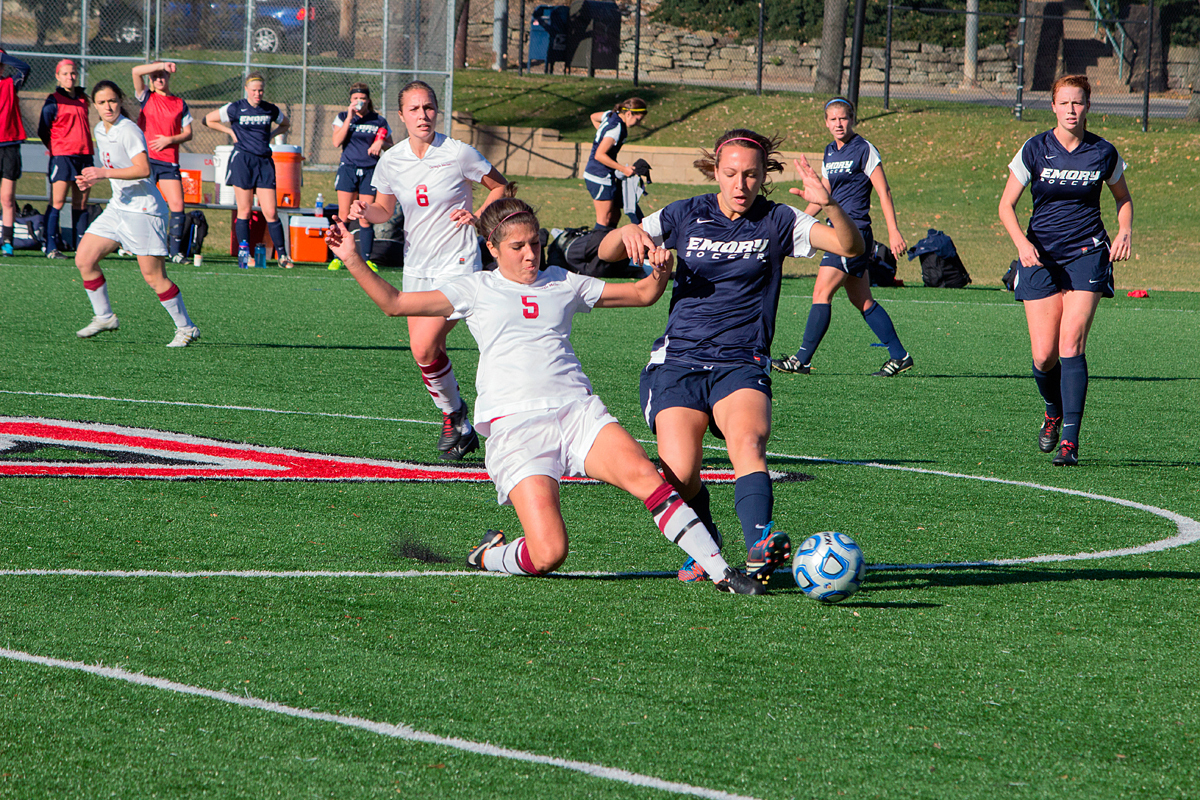 The Tartans fell short in their last game of the season, losing to a team that finished with the same record. (credit: Kelsey Scott/Staff Photographer)

The No. 17-ranked women’s soccer team continued to charge its way through the NCAA tournament draw, until facing a tight loss on Sunday against Emory University.

On Saturday, the Tartans took the field against No. 25 Wheaton College of Massachusetts and emerged victorious, 3–0.

“We scored against Wheaton and never let up. It was all about our mentality and will to win,” senior midfielder Stephanie Hare said. “Now the focus is on Emory and keeping our national championship dreams alive.”

It was a sunny 53° F when the Tartans played against the Wheaton College Lyons. The Tartans gained control of the ball early in the game, and set the tone with their first goal from junior forward Alex Venegas within the first five minutes. The Tartans continued to pressure the Wheaton defense, keeping the ball in the Lyons’ end of the field.
Thirteen minutes later, Venegas scored again by kicking the ball out of the Lyons goalie’s reach. Carnegie Mellon had 11 shots on goal in the first half.

In the second half, the game became tighter, and the Lyons played better defense. In this half, the Tartans only had five shots on goal.

The Tartans defense remained strong throughout, only allowing the Lyons five shots on goal the entire game. With help from the Tartan defense, junior goalkeeper Anna Albi recorded her sixth straight shut out.

Junior defender Rachel Contopoulos scored her first goal of the season in the second half of the game, increasing the Tartans lead to 3–0.

“It’s another great day to be a Tartan,” sophomore defender Lauren Simicich said.

However, the team fell in the quarterfinal round of the NCAAs the following day. The Tartans took on No. 16 ranked Emory University Eagles at home with 302 fans cheering them on.

The Tartans have a lot of experience against the Eagles from University Athletic Association play. But despite all the matchup experience, the two teams could not score.

Yesterday in NCAA play, the Tartans and the Eagles stood deadlocked at 0–0 through two overtimes and well into the shootout.

The Eagles finally pulled through, winning 11–10 in the shootout. Emory will play in the semifinal round against Wheaton College of Illinois.