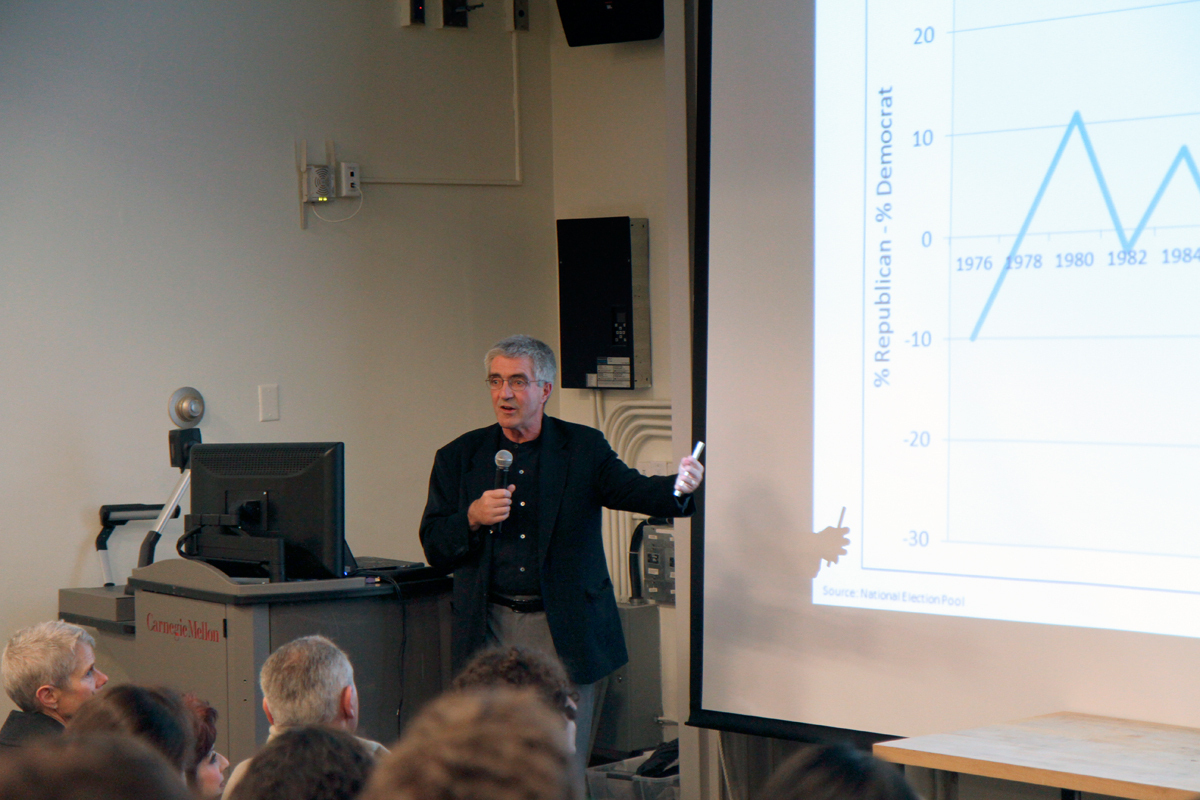 Morris Fiorina used charts and graphs to explain the implications of the recent presidential election for the future of politics in America. (credit: Jennifer Coloma/Operations Manager)

Titled “The Road to (and from) the 2012 Elections,” the presentation made substantial use of graphs and charts.

The lecture covered America’s background with respect to political divides, and the changes in partisanship in recent years. Despite the event’s title, Fiorina said, “There’s not much to say, since not much changed,” and that a lot of the data was not yet available for analysis about the recent election.

After 2006, when the Democrats ended the generation of the Republican majority, they hoped that they would be able to solidify political wins as the Republicans once had. James Carville published a book in 2009 titled, 40 More Years: How the Democrats Will Rule the Next Generation. Fiorina joked about the accuracy of these predictions, saying, “If you want this book, Amazon will give it to you for 60 percent off.”

He explained that “we are now in what political scientists call ‘the era of divided government.’ ”

In 26 of the past 32 years, the U.S. has had a divided government determined by at least one party possessing the House, Senate, or presidency.

“In the past six years we’ve had four elections, each with different patterns of instructional control. This is extreme electoral instability,” Fiorina said.

He explained that this was the second worst period of electoral instability in American history.

Fiorina called the worst time in American history “the Period of No Decision,” which lasted between the 1870s and 1890s.

He also said, “That era, like ours, was an era of party sorting.” Party sorting and polarization occur when the more extreme ends of a political spectrum are adopted by their respective parties.

Using more figures, this time on political stances of congressmen, Fiorina claimed that “the most conservative Democrat is now often to the left of the most liberal Republican.” He showed that this was not necessarily true throughout the previous eras of American history.

Part of this polarization, Fiorina revealed, is due to the increasing role and influence of activists in politics.

“The tiny hardcore [element] of each party gives us the choices we face,” he said, illustrating this point by showing that really only a small percentage of total eligible voters turned out at primaries where former Pennsylvania Senator Rick Santorum, a more extreme Republican presidential candidate, won.

However, Fiorina was careful to establish that this growing partisanship was not a direct result from the American people’s views: “Americans are uninformed, and for the most part confused and ambivalent.”

Fiorina contrasted viewing figures for political debates and pundit programs with those of American Idol and other popular television shows, each separated by at least 15 percent.

The presentation briefly addressed other issues such as campaign financing, the future of the Republican party and its ideologies, and a lack of party compromising. After his lecture, Fiorina solicited questions from the audience, often tying them in to reinforce his points.

Fiorina ended by emphasizing, “I’m an optimist, but, in a 40-year career I’ve never been more concerned about what the future might hold than now.”

Stanley Krasner, a sophomore economics and mathematics double major, said, “The use of convincing statistics to discuss political opinions is a not-new, but growing, trend. Coming from a quantitative background, I see why people like data, even though they may not be able to interpret all of it. His data helped analyzing the past, but isn’t very effective at predicting the future.”

Tonya Sedgwick, a sophomore decision science major, said, “I thought it was very interesting. The graphical comparison of history was helpful in many parts.... It was a very good analysis of something, but not a lot of conclusion on where to go.”

Fiorina, who received his bachelor’s degree from Allegheny College and his master’s and doctorate degrees from the University of Rochester, referenced his Pittsburgh background at the beginning of his talk.
“Thank all of yinz for coming out,” he announced, referencing the popular Pittsburgh slang.

The lecture was presented as a Center for International Relations and Politics event, and was sponsored by the Quantitative Social Science Scholars program.