How Things Work: The 10th dimension 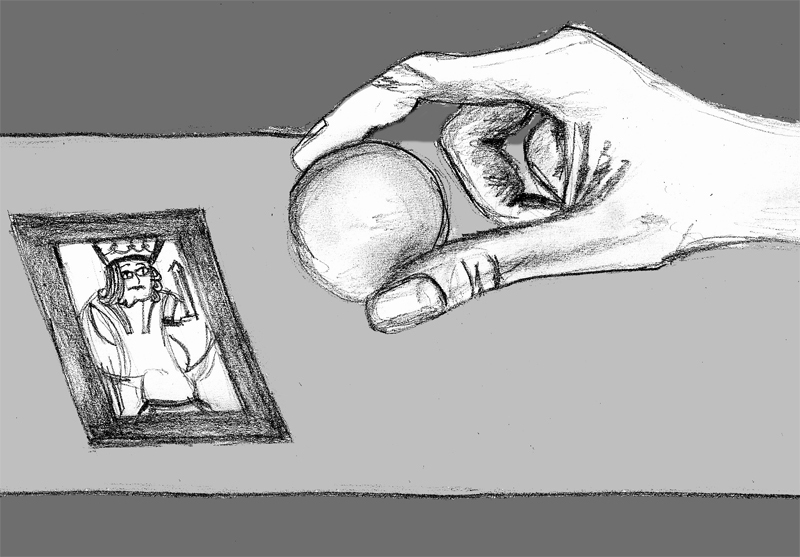 A character that lived in the second dimension, like a playing card, would view a three dimensional object, like a ball, as a circle. (credit: Adelaide Cole/Art Editor and Michael Setzer/Acting SciTech Editor)

String theory is an idea in particle physics that endeavors to reconcile quantum mechanics and general relativity. It uses the concept that elementary particles, such as quarks and electrons, are not dimensionless points, but rather one-dimensional oscillating “strings.” String theory could be a physicist’s dream — a unified theory of everything — but it requires extra dimensions. So, how many dimensions are there?

Rob Bryanton’s book and video, both called Imagining the Tenth Dimension, explore a way of looking at space and time to include extra dimensions.

To illustrate this point, imagine a dot on a piece of paper. This is the zeroth dimension.

Imagine a world that only has two dimensions. Now imagine two-dimensional creatures like those on a playing card; we will call them Flatlanders, a term originally coined by author Edwin Abbott. When Flatlanders look at three-dimensional objects, they perceive them as two-dimensional cross sections of these objects. A ball, for example, would look like a circle.

The third dimension is the one in which we live. A three-dimensional object has length, width, and height. The third dimension is what we fold through to get from one point to another in the second dimension.
To illustrate the concept of folding, Bryanton describes a Flatlander that is walking on the edge of a piece of paper. If the piece of paper is rolled into a cylinder, the edge that the Flatlander was on touches the opposite edge of the paper, teleporting the Flatlander to the other side of paper if it were to be unfolded again.

The fifth dimension includes not only the line from your birth to your present self, but also the infinite lines branching from your birth to all possible versions of your present self. Remember how the two-dimensional piece of paper was folded so the Flatlander could travel from one point to another? If you fold the fourth dimension through the fifth, you can travel back in time.

As we enter the seventh dimension, we must imagine a line that treats the entire sixth dimension as if it were a mere point. In other words, we take the beginning of our universe and extend from it branches that represent all possible timelines and all possible endings for the universe — in essence, the concept of infinity — and treat this all as one point.

If we changed the initial conditions of the universe and used this different universe as the starting point, and if we extended from it different branches for all possible timelines that could have resulted from this universe and treat that as a single point, we now have a second infinity point that we can draw a line to. To draw a line in the seventh dimension, we then connect these two infinity points.

If we branch off this line and draw a line to yet another infinity, we are now in the eighth dimension. Once again, to travel from one point to another in the eight dimension, one must fold it through the ninth dimension.
Finally, the 10th dimension is a single point that represents all the possible branches of every possible timeline of all the potential universes. But what other point can we then connect this to? According to Bryanton, it appears that there is nothing left.