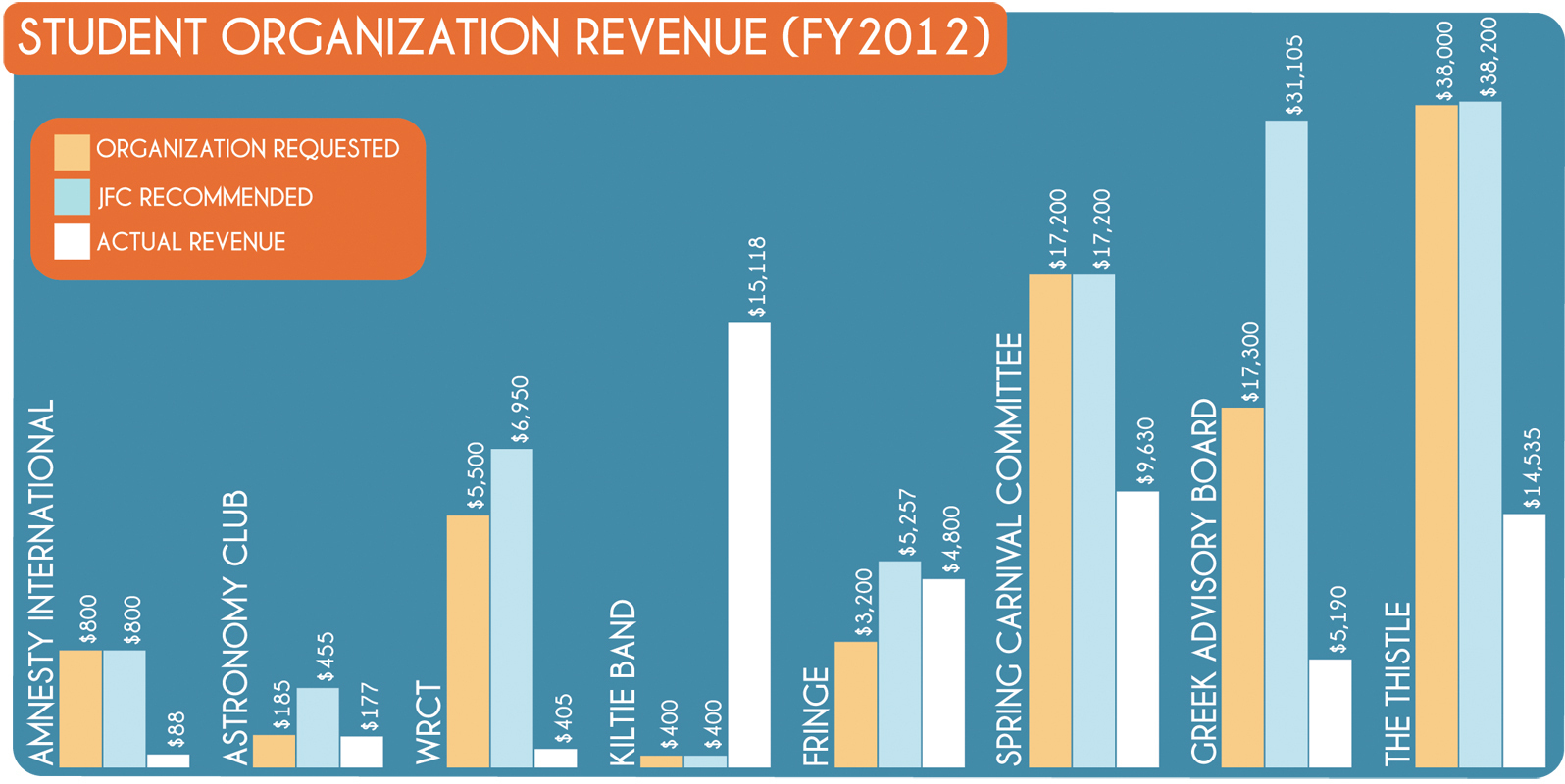 This graph shows the difference between the revenue that various organizations requested they be required to raise for themselves, the revenue that JFC recommended they raise, and the actual revenue raised in fiscal year 2012. (credit: Adelaide Cole/Art Editor and Alan Vangpat/Senior Artist )

Carnegie Mellon students may see an increase in their activities fee in the near future. On Thursday, Student Body Vice President for Finance Jon Mark announced via email that he is proposing a $24 increase in the semesterly student activities fee that would go into effect at the beginning of the next academic year.

Mark, a senior lighting design major, will bring the matter up for a special election on Nov. 8. If the student body votes in favor of the increase, Mark will recommend to the Carnegie Mellon Board of Trustees, which sets the student activities fee, that the fee be raised.

The proposed fee increase would affect all Carnegie Mellon students, undergraduate and graduate. The fee would increase from $97 per semester to $121, a 25 percent increase. However, the election is a split referendum, meaning that the votes of graduate students and those of undergraduate students are counted separately. In addition, both Mark and Student Body President Will Weiner said they intend to recommend raising the fee only for students on the Pittsburgh campus; until now, students in Qatar have always had to pay the same fee.

“The desire is to have the will of the students be represented to the Board of Trustees and hope that there’s not a bureaucratic problem,” said Dean of Student Affairs Gina Casalegno. “Does it create some technology problems in terms of from a systems standpoint and implementation from the registrar’s office, etc.? Certainly it’s easier if everyone gets to assess the fee and gets exactly the same. Easier, absolutely. But we can handle that difference.”

Mark campaigned last semester on a platform of raising the fee. He wrote in his official platform, “The student activities fee should be increased to reflect the growing need of student organizations.... Through good advertising and education, I am confident the student body will see value in the increase for this fee.”

Mark, who sits at the head of the JFC, believes that a fee increase is necessary in order to counteract a growing disparity between the funds requested by student organizations and funds granted — in particular, Mark said, between the revenue that JFC expects organizations to raise for themselves, and the amount that organizations are actually able to raise.

Weiner, a senior economics and statistics and decision science double major, said that he has been a proponent of raising the fee since his time as Undergraduate Student Senate chair.

“It’s an issue I think that is pretty important to students, and I wanted to make sure ... to give the students an opportunity to actually vote and see if this issue that we see as a problem [is one] students agree with,” Weiner said.

According to Weiner, student government has been looking into other ways of solving the funding problem, such as tightening the requirements for funding student groups. But Weiner feels that raising the student activities fee is the only viable long-term solution.

“A part of the big problem is that groups have been cutting back on lots of things,” he said. “Spring break trips aren’t being funded at all right now. These were things that we couldn’t think of a way to fund at all. The only real solution to it is more money, at this point.”

Mark, in turn, stressed the qualitative effect a fee increase would have on groups. “I meet with probably close to seven organizations a week. And just hearing about how they don’t have enough and how the system doesn’t work for them in certain ways, that’s what drives me to know that I need to overhaul this process.”

Students in funded organizations have been guardedly positive about the idea of an increase.Ivy Krislov, a junior technical writing and creative writing double major and head of finance for readme, said, “We’re only getting money to put out the minimum number of issues that we would normally put out. We have very limited funds for anything else, and we’re expanding this year, so we have been mincing around trying to find money to do things.”

“Our student activities fee isn’t that expensive this year, so [a raise] would probably be worth it, just so that we could expand the opportunities people can offer to students,” Krislov added.

Timothy Bach, a senior computer science major and operations director for Carnegie Mellon EMS, believes our current student activities fee is fairly low, and that in order for our school to focus on providing a well-rounded education, it should place emphasis on supporting student activities.

“If we are intelligent about how we spend our JFC money, I think raising that fee will allow our students to do better things: to go to more conferences, to travel more, to learn more, to broaden their horizons, and I think that is critical,” Bach said. “I, like many other students, obviously do not want to pay more money, but I think that this is one of the areas where it is worth it.”

However, Bach said that because he categorizes Carnegie Mellon EMS as a campus service, he does not believe that all of the club’s funding should be derived from Student Activities. “Because we’re a campus service, we get the majority of our money from campus affairs. We get money from JFC and SDC to cover gaps in our budget for things like upgrading our infrastructure and buying required things like uniforms. I think that the purpose of JFC is to encourage students to do things outside of class,” he said.

Tetyana Dolotova, H&SS interdisciplinary senior and president of Ballroom Dance Club, said that she would support an increase in the student activities fee if the change was minimal. “I would not want to run our club as an inconvenience to the student body, but if it’s a subtle increase that other students won’t really notice, then I would [support it],” Dolotova said.

With the extra funding, Dolotova said her club would use the money to get Activities Board lighting and host bigger events. “We hire professional dance instructors, and they charge a high fee for their services, and we also have a competition team — we have to pay to have them attend competitions,” she said.

Shilpa Balaji, a senior computer science major and president of Mock Trial, said, “The thing with the student activities fee is that a lot of that money goes to clubs that the people providing that fee aren’t necessarily a part of. Do I really want to be giving money to organizations that I will never see a benefit from — or to a cause that I don’t necessarily support? I think it could be good, but any kind of extremely large raise, I might have issues with.”

The special election will run from Nov. 8 to Nov. 10. Mark will hold two town hall meetings to discuss the fee: one this Wednesday at 5 p.m. in Rangos 1, and one on Nov. 6 at 5 p.m. in the Danforth Lounge.