Stir fry is a flexible dish that can be made with a large variety of vegetables or proteins. (credit: Anna Walsh/Associate Editor) 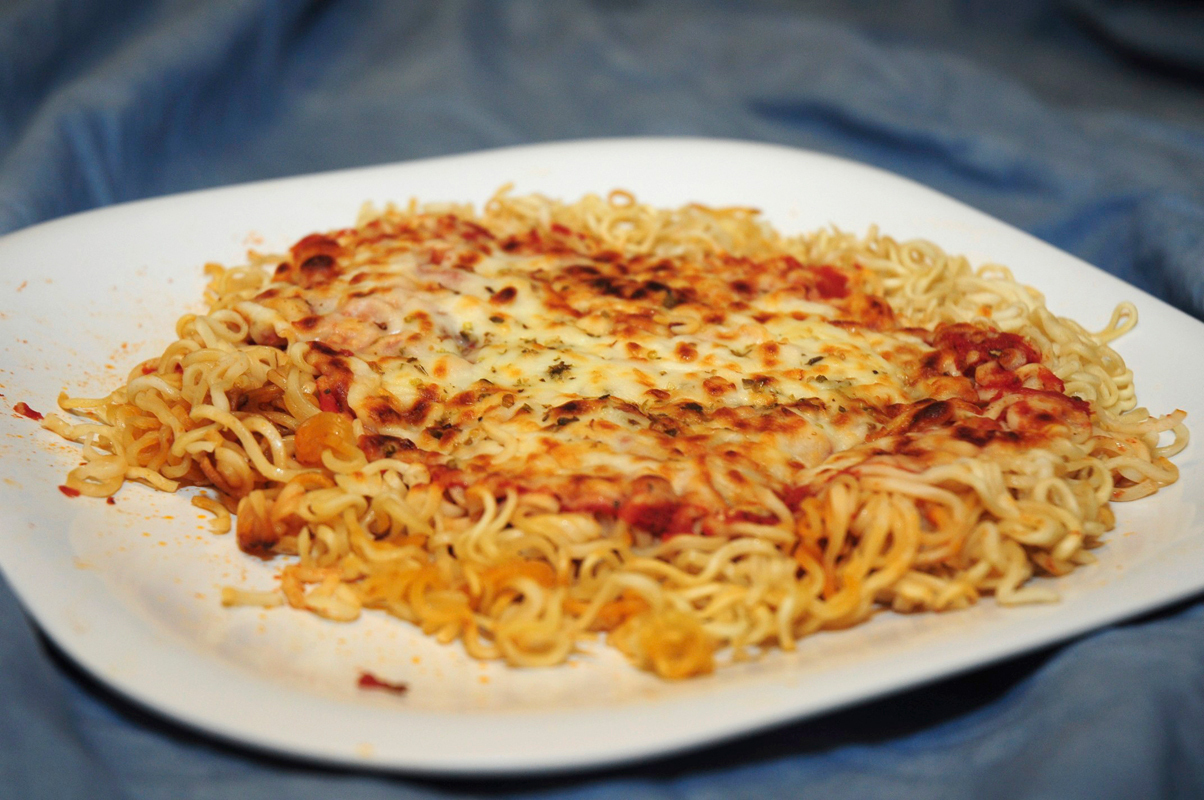 Ramen skillet pizza doesn’t taste exactly like real pizza, but it will satisfy any craving for carbs and cheese. (credit: Anna Walsh/Associate Editor) 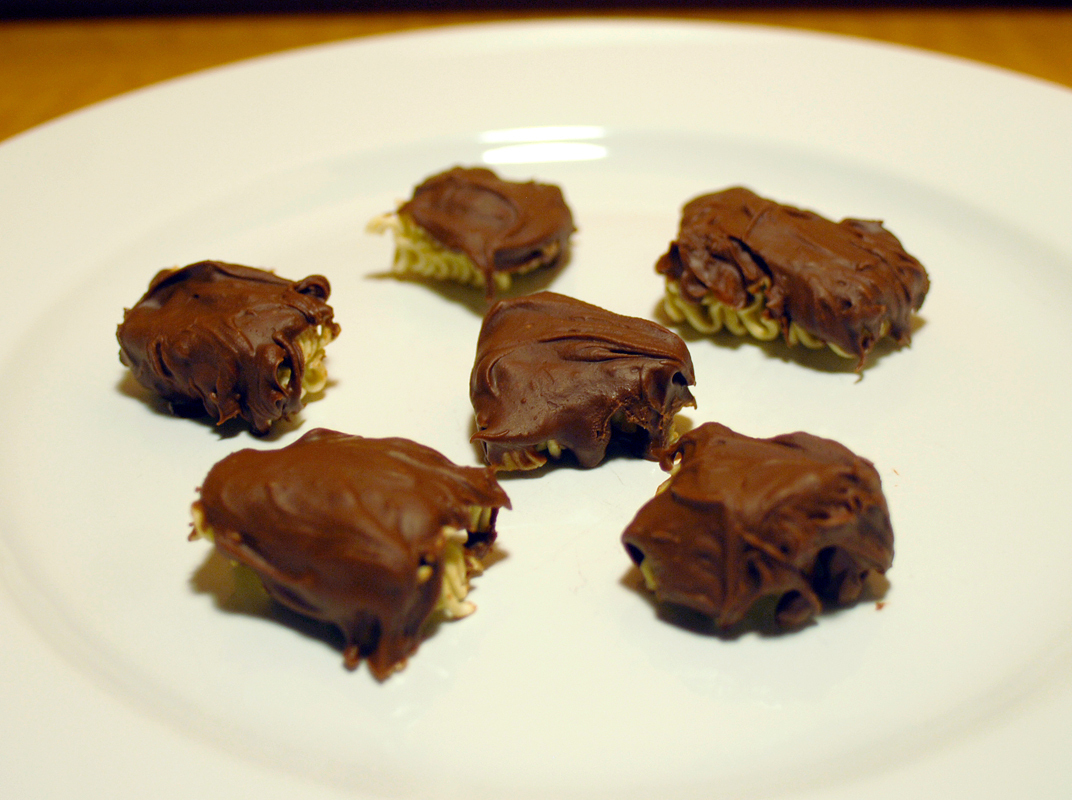 While I was watching the Cooking Channel a few weeks ago, an advertisement came on for Maruchan Ramen Noodles that showed a white, suburban, middle-class family happily enjoying prepackaged noodle products together. I rolled my eyes; with the family’s over-enthusiastic responses to ramen aside, it seemed unlikely that that family represented Maruchan’s main customer base. At a mere 40 cents a package at Giant Eagle, ramen noodles are best known for being a standard staple of any broke (or kitchen-fearing) college student’s diet, eaten more out of necessity than out of genuine enjoyment.

The commercial got me thinking, though, about ramen noodles’ culinary potential. While the noodles and accompanying flavor packets may be unexciting on their own, they are straightforward enough to serve as excellent building blocks for other recipes that are more nutritious and interesting.

My culinary accomplice, Xuexia Jiang, and I thus set out to use ramen in as wide of a variety of meals as possible, and we found that ramen noodles can be incorporated into plenty of different recipes for every meal. There are literally hundreds of recipes on the internet involving ramen noodles, but our sampling of ramen-related culinary experiments proves that the noodles can be consumed for any meal and taste delicious in the process.

Ramen Egg Scramble
Ramen for breakfast sounds suspect, but the noodles work surprisingly well in this dish. Since ramen noodles are fairly flavorless on their own and have a nondescript texture, they make for a good, filling ingredient. In this recipe, for instance, one can turn three eggs and a handful of vegetables and cheese into a filling dish that can easily satisfy two people.

Drop half of the package of ramen noodles into boiling water. Cook for four minutes, or according to package instructions.
Drain water and toss in instant powdered stock included in the package. Mix well with a fork.
Melt butter in a pan over medium heat. Quickly cook chopped onions for two minutes, or until they are translucent. Add cherry tomatoes (or other vegetables) and cook for another minute.
Add noodles into the pan and mix well with the other ingredients. Cook for another two minutes.
Spread noodles and tomatoes evenly across the pan. Add egg mixture and cook for one minute.
Add cheese on top, turn down heat slightly, and cook for approximately three more minutes, stirring occasionally.
Top with salsa and serve.

Ramen Skillet Pizza
This recipe is not a perfect replica of pizza. If you have a craving and the only cure is pizza, this dish probably will not suffice, as it still tastes like noodles rather than pizza crust.

However, if you’re just in need of some carbs drowned in sauce and cheese, ramen pizza can get the job done. The noodles take on a nice grilled flavor when cooked in the pan, and the more toppings you add, the easier it is to forget that the “crust” is actually just 80 cents’ worth of Japanese noodles.

Heat broiler. Bring water to boil in a large pot.
Add noodles and cook, stirring occasionally, for three minutes or until tender. Drain in a colander.
Heat olive oil in a large skillet. When hot, add noodles and press evenly to cover bottom of pan. Cook on medium-high heat for four minutes or until browned underneath.
Spread sauce over noodles, then sprinkle with cheese, oregano, and other toppings.
If the skillet handle is plastic or wood, wrap it in a double layer of foil to protect it from scorching. Broil four to five inches from heat source for two minutes, or until top is bubbly and cheese starts to brown.
Let cool about five minutes before cutting to serve.

Ramen Stir Fry
Stir fry is a very flexible and easy dish. You can buy frozen packages of premixed stir fry vegetables, or you can just use whatever combination of vegetables and meat you happen to have on hand.

Pour a small amount of oil onto the bottom of a frying pan or wok and heat pan.
Add vegetables and fry; cook off most of the water.
At the same time, boil a pot of water. Add ramen and boil until noodles are pliable.
Place ramen noodles into the same pan as vegetables and add a dash of soy sauce, the package of Oriental seasoning, and a little more oil.
Stir briefly, then take off heat. Add salt and pepper.
Chocolate Peanut Butter Munchies
Ramen noodles for dessert sounds even more doubtful than ramen for breakfast does. However, the uncooked noodles in this recipe work as a crunchy complement to peanut butter and chocolate. If you’re craving some peanut butter and chocolate and don’t want to just eat peanut butter and chocolate syrup straight off a spoon, this is a surprisingly tasty way to satisfy your craving.

In a microwave-safe bowl, microwave chocolate in 30-second intervals until melted, stirring in between.
Stir in peanut butter with melted chocolate.
Carefully break uncooked ramen into bite-sized chunks. Be careful not to crumble noodles.
Spread chocolate peanut butter mix over each of the noodle chunks, covering each well.
Refrigerate for 10 minutes, or until chocolate mix has completely hardened.