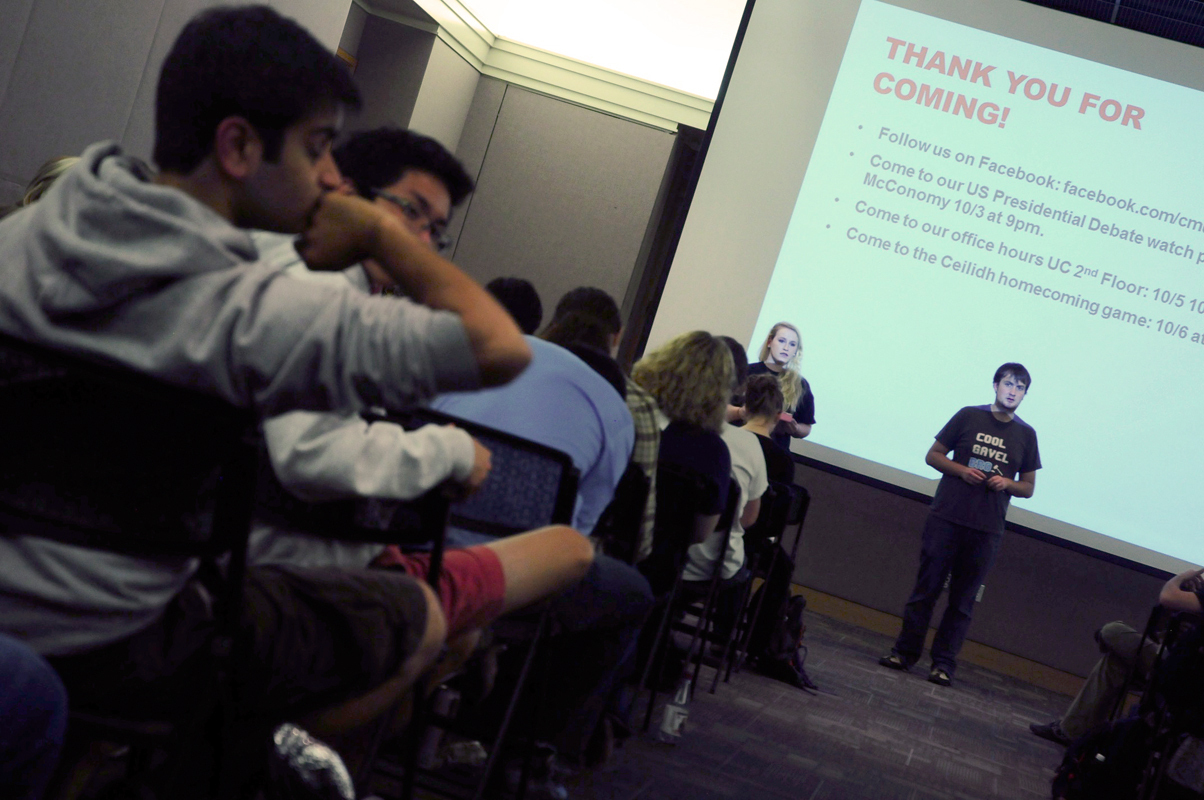 Student Body President Will Weiner addresses students at his and Student Body Vice President Meela Dudley’s first town hall of the year. At the town hall, Weiner and Dudley discussed their plans for the year and asked students for feedback. The first 100 students were promised Chipotle, though only about 70 attended. More town halls are planned for the future. (credit: Jennifer Coloma/Operations Manager)

Advertised around campus as “(Chi)politics,” last Wednesday’s town hall meeting set the tone for what Student Body President Will Weiner and Vice President Meela Dudley hope to accomplish while in office.
Weiner, a senior economics and statistics and decision science double major, and Dudley, a senior creative writing and professional writing double major, emphasized throughout the meeting that transparency and a strong public presence on campus are integral to their roles.

Held in the Connan Room, the forum attracted about 70 people, a number Weiner mentioned was significantly higher than in the past. Weiner and Dudley built up hype by offering free Chipotle burritos to the first 100 attendees, advertised in posters and on the student body president Facebook page.

Weiner and Dudley plan to theme each of their ensuing town halls. “The Chipotle wasn’t the cheapest thing ever, but I’m happy because it made a big impact,” Weiner said. “Even a lot of people who couldn’t make it still knew, and were excited and jazzed.... [We’re] figuring out ways that are still fun and gimmicky, but cost effective.”

This particular town hall began with an overview of the functions of the branches of student government, from the executive committee to cabinet liaisons. This transitioned into Weiner and Dudley’s projects for their time in office. The pair discussed what they’ve completed thus far, such as launching a social media platform, as well as their ongoing initiatives, such as improving communication between student groups.

One initiative, in particular, included the possibility of raising the student activity fee.

According to Weiner, there have been complaints in the past about student groups being underfunded. He said that student government had been compiling data on increasing the fee, and would host info sessions and more town halls specifically for this initiative.

Once Weiner and Dudley moved through the projects they have already slated, they asked attendees for feedback on a series of preplanned questions.

The questions primarily addressed which campus services students felt were difficult to communicate with; what the ideal community event would be; what issues could be brought to the Pittsburgh Student Government Council (PSGC), a larger city-wide coalition of students; and how campus could be improved.

Student suggestions included stream-lining the reimbursement process for student activities, expanding off-campus eateries that accept DineX, and hosting a campus-wide trick-or-treating event during Halloween.
“I thought that there were a lot of great comments that were made and that Will and Meela were really receptive to everything,” Lindsay MacGillivray, a junior biopsychology major, said of the discussion session. “They got a good dialogue going, as opposed to just pointing out ideas.”

Discussion then moved into a free-form format, and focused on the bigger picture of what students wanted from their student body president and vice president. “The things we have to do are not particularly well defined,” Weiner said.

At this point in the meeting, many suggestions from the audience were not necessarily within either Weiner or Dudley’s capacity as president and vice president. One student asked if there was any way they could have a break during 90-minute classes, while another asked if Health Services could “suck less.”

At one point, an audience member even joked if Weiner and Dudley could control Pittsburgh’s chaotic weather patterns.

Despite the few hiccups in serious dialogue, Weiner and Dudley were happy with how the town hall turned out.

“I was really pleased with the amount of questions,” Dudley said. “And specifically, I feel like this is setting the trend for the kind of feedback we want to receive for the rest of the year. Personally, we’ve made a really big push for having office hours, Board of Directors meetings, [executive committee] meetings, and things of this nature — town halls — on a more regular basis.”

Weiner, mirroring Dudley’s thoughts, said, “People seemed engaged about what we’re doing. So I’m excited about the fact that this was a pilot to make sure that we can keep doing these and I think, even without these incentives, we can still get ... enough people, especially if it’s issue-based.”