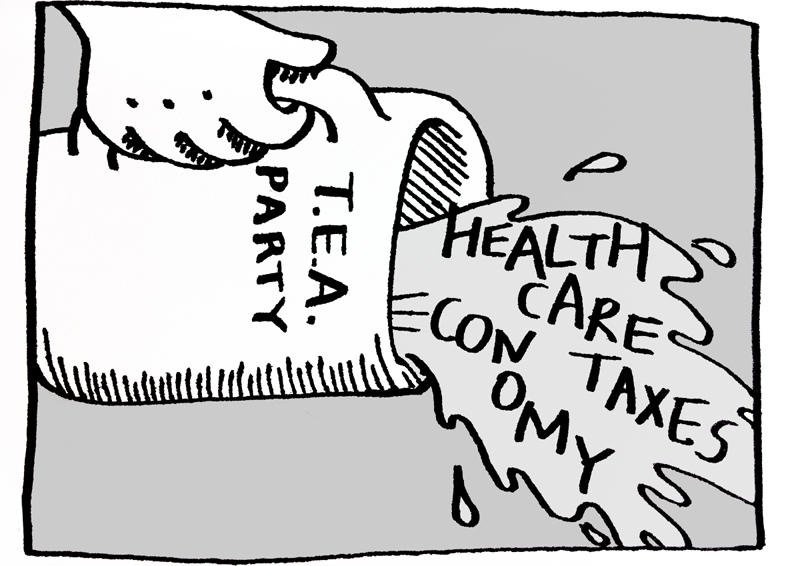 Credit: Kathy Lee/Art Staff
Editorials featured in the Forum section are solely the opinions of their individual authors.

I am afraid of several things in modern American society — global warming, the national deficit — but nothing scares me more than the prospect that a political representative from the hyper-conservative Tea Party could quite possibly be elected into the presidential office within my lifetime. That being said, watching the CNN/Tea Party GOP Presidential Debate on Sept. 12 was like watching a seemingly endless compilation of every horror movie George Romero has ever directed, while standing in the middle of the Demilitarized Zone that divides the North and South Korea — horrifying.

The eight candidates at the the CNN/Tea Party GOP Presidential Debate, hosted by CNN’s Wolf Blitzer, touched on all of the important topics during the broadcast.
Topics of discussion within the two-hour debate included taxes, 9/11, oil dependency, taxes, healthcare reform, taxes, taxes, the HPV vaccine, taxes, and more.
The most popular topic, if you couldn’t guess, happened to be taxes. Each candidate proposed drastic tax cuts, and yet all of them expressed intentions to reduce the deficit. The candidates’ methods of reducing said national deficit, however, were almost always absurd or unspoken. For example, former Georgia congressman and Speaker of the House Newt Gingrich stated that there is enough waste and swindling in government to balance our national budget without actually cutting any of the funding that finds its way to legitimate beneficiaries.

Former United States Ambassador to China Jon Huntsman also proposed a plan when it came to leading economic growth. “This country needs to wean itself from its heroin-like addiction to foreign oil,” said Huntsman. However, Huntsman later admitted to opposing the taxing of the consumption of oil, a measure that would in fact work to wean our dependence off foreign oil. Increasing domestic production, an idea that nearly all Republicans favor (including Huntsman), simply won’t succeed, because the U.S. doesn’t have enough oil within its territory to appease consumption rates. The majority of candidates danced around their deficit relief plans, leaving me with the impression that these candidates would either drastically increase the national deficit or propose devastating spending cuts they were obviously too afraid to mention in their campaigns.

During the debates, each candidate was asked what he or she would do about the 45 million uninsured Americans, to which the group replied with a call for the end of Obamacare and the creation of “health savings accounts.” Texas Congressman Ron Paul — commonly referred to by media outlets as the original “godfather” of the Tea Party — attracted a lot of media attention when he argued that a healthy uninsured man who experiences a medical catastrophe should “assume responsibility” for his lack of coverage, insinuating that uninsured Americans should die for their insurance faux pas.

Following this statement, Paul then argued that churches would rescue the uninsured.

Perhaps the scariest moment of Paul’s statement was when the crowd cheered. As Chicago Sun-Times writer Richard Roeper asked in his Sept. 13 article, “politics aside, what kind of person cheers death?” Writer David Dayen of the FDL Newsdesk concluded his analysis of the Tea Party’s take on insurance with the following advice: “don’t get sick, and if you do get sick, die quickly.” While the Tea Party constituency is known for supporting limited government and personal responsibility, CBS’ Robert Hendren points out that it was in fact the president most adored by Tea Party members who signed the COBRA Act of 1986, which helped lead to the institutionalization of health care costs. “A healthy young American who doesn’t have health insurance suddenly needs emergency care,” said Hendren. “Federal law requires that that care is paid for. That law was passed in 1986, which means it was signed into law not by Mr. Obama or even Bill Clinton, but by Ronald Reagan.”
The biggest applause of the evening came from Gingrich’s statement referring to President Obama and his healthcare reform as “scary for the American people.”

Both former Pennsylvania Senator Rick Santorum and Texas Governor Rick Perry called for healthcare reform; however, they refused to say whether or not they would undo the Medicare prescription drug benefit enacted under President George W. Bush, a massive benefit that Santorum voted for while in office.
The House of Representative Michele Bachmann of Minnesota, a woman that I would normally regard as the Al Capone of the Tea Party mafia and possibly my least favorite person in the world, withheld her usual Palin-esque anti-gay slander to deal a low blow to Rick Perry, pointing out that a certain drug company made millions of dollars off of a 2007 mandate which required Texas schoolgirls to receive HPV vaccinations.

After the broadcast ended, most media outlets searched for a ‘winner.’ Personally, I think they’re all losers, but if I had to pick one I guess I’d have to agree with Andrew Sullivan, a columnist for The Daily Beast. “Clearly the crowd loved Perry the most,” Sullivan wrote. “God help us.”