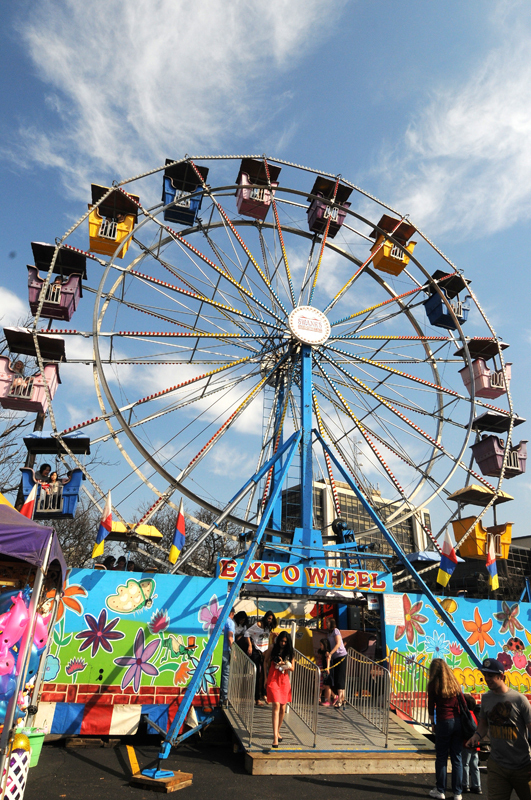 Carnival centers around Midway, which is filled with carnival rides and student-constructed booths. (credit: File Photo) 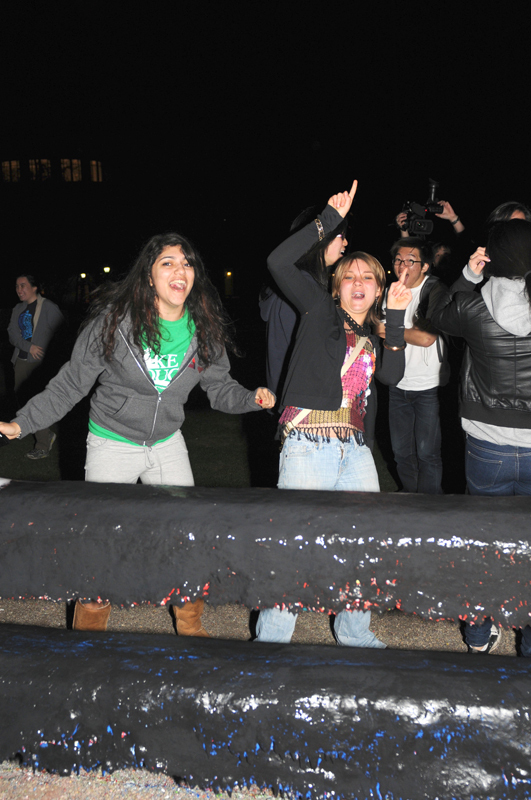 Students gather together at midnight to paint the Fence, which serves as a community message board. (credit: File Photo)

Beyond its reputation as a world-class research institution, Carnegie Mellon University harbors a unique heritage and set of quirky traditions. Yet, between mingling and competing with your future classmates, where can you even begin to discover what makes a true Tartan’s heart beat? From driving a buggy flying down Schenley Drive to shivering in the snow painting a fence, there is no lack of creativity to spark your interest.

Carnival: The ultimate distraction from finals

At Carnegie Mellon, April means that the highly anticipated Spring Carnival will soon take over the university. Carnival is not just a weekend event, but a tradition, encompassing yearlong preparation and dedication from students and organizations on campus. The festivities center on Midway (the parking lot behind the Morewood dormitories), and the week beforehand consists of booth-building. Student organizations, sororities, and fraternities showcase their creative talent through booths, which revolve around a yearly theme and will live only for the duration of Carnival. Prizes are awarded to the best booths in both Greek and independent organizations. The past year’s theme was “When I Was Your Age,” and booths included Sigma Phi Epsilon fraternity’s first-place “Teenage Mutant Ninja Turtles,” Kappa Alpha Theta sorority’s first-place “The KAT in the Hat,” and Delta Gamma sorority’s second-place “POOH BEAR.”

The next highlight of Carnival, Sweepstakes (more often called “Buggy”) are the exhilarating races of student-constructed and driven buggies through an over-4,000-foot-long course. Although the races only last two days, the work lasts the entire school year, including hours of practicing the race course. Roles within a buggy team include a driver (usually five feet tall or less) who steers from within, pushers to roll the buggy along the course, mechanics to fix and maintain the buggy, and other members for supporting the vehicle’s progress in the course. Of booths and buggies, Jen Buse, a senior Head Orientation Counselor, noted, “It’s such a unique tradition: What other school would devote months to building a structure that will stand for only three days, or be so serious about pushing a small buggy with a person inside down a hill ... and cancel two days of classes for it?”

Last but not least is the School of Computer Science mobot races. This competition includes student-built autonomous mobile robots, called “mobots,” navigating a course that runs 400 feet along a white track outside of Wean Hall. (Yes, that little white track has a useful and fun purpose besides confusing you on the walk to classes.) Each race lasts approximately four minutes, and no human intervention with the robot is permitted. The winning mobot takes away a grand prize of $1,000, while the races also serve to raise awareness and support for the Robotics Club.

The campus would not be the same without the iconic Fence, the original rendezvous point between the all-female Margaret Morrison Carnegie College and the Carnegie Institute of Technology, formerly all-male. Today, it serves as a message board and gathering place for the Carnegie Mellon campus. The mission is to capture the Fence, paint it only during the hours of midnight to sunrise, and protect it during the day from other would-be Fence painters, no matter the weather. Many an organization advertisement, charity message, or personal statement has appeared on our cherished Fence.

Andrew Carnegie immigrated from Scotland to the United States with his family in 1848, and Carnegie Mellon continues in his rich Scottish heritage with our own blend of bagpipes, kilts, and Scotty, our Scottish terrier mascot. The Kiltie Band, featuring marching band music, performs in kilts, while Carnegie Mellon’s Pipe and Drums plays the bagpipes with traditional Scottish regalia, with Andrew Carlisle as its director. If a band is not enough to sate your curiosity, Carnegie Mellon is one of the few colleges in the country to offer a major in bagpiping. Also, Skibo Café, beyond offering an array of food, frozen yogurt, and coffee, pays homage to Carnegie’s Skibo Castle in Scotland.

Behind the beautiful Kresge Theater in the CFA building lies the Green Room, a testament to past and present graduating drama students. Before leaving Carnegie Mellon, drama students sign their names on the walls and ceilings. Past signees have included Holly Hunter and Zachary Quinto (Spock of Star Trek).

As you enjoy Orientation and face your first semester, be sure to remain open-minded to all of the traditions Carnegie Mellon has to offer. “Make a bucket list of Carnegie Mellon traditions and just get out there — even if you’re the only one of your friends going,” Helen Wang, associate director of Student Life for first-years, said. “The CMU experience is full of learning both in and out of the classroom. Find ways to leave this place better than you found it.... Whatever you want to put off until tomorrow, see if it can be done today — this is the CMU spirit.”