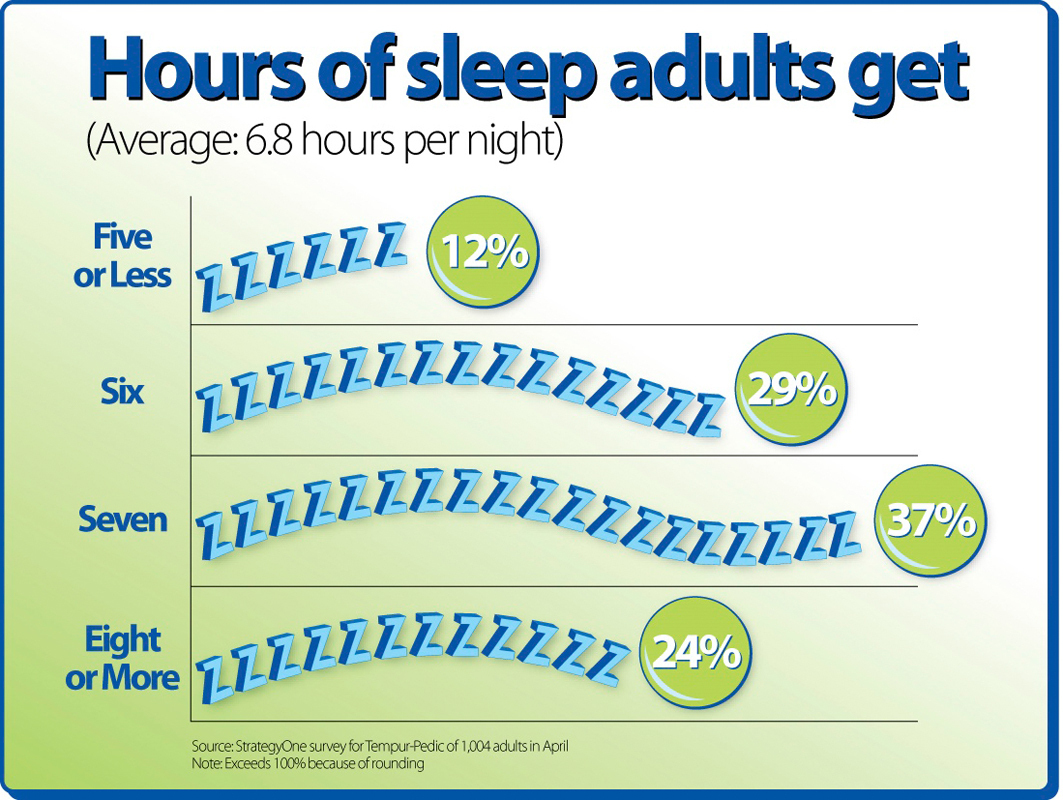 The majority of adults receive less than eight hours of sleep every night. The survey above was conducted in April 2009 by Tempur-Pedic. Percentages sum to more than 100 due to rounding of percentages. (credit: Courtesy of Wikimedia Commons) 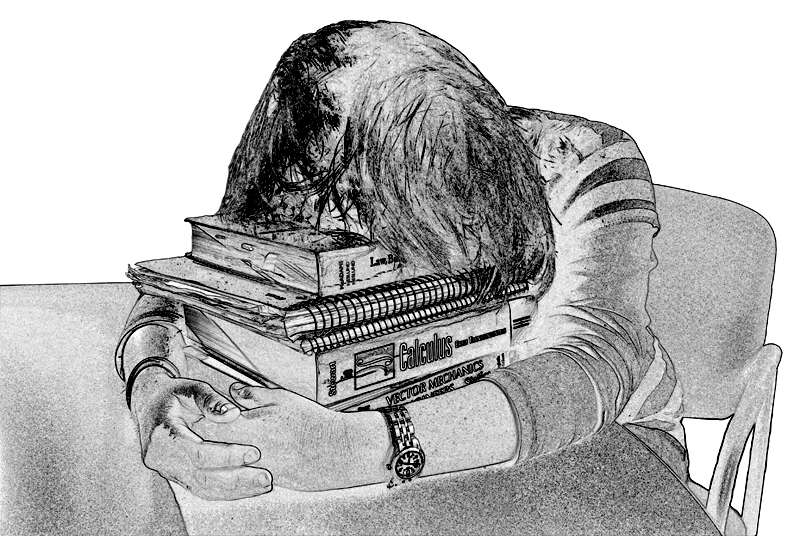 Many adults assume they can get away with five to six hours of sleep every night. With the semester coming to a close and final exams just around the corner, many students may be neglecting sleep even more than usual. But five to six hours should be enough, right? Researchers in the Sleep and Chronobiology Laboratory at the University of Pennsylvania conducted a study to assess the validity of this claim.

For a period of two weeks, three groups of people were subjected to the Psychomotor Vigilance Test (PVT), a sustained attention examination used frequently by psychophysiologists to test the effects of sleep deprivation on a person’s attentiveness. Each member of the first group of people was allocated a daily total of four hours of sleep, the second group six hours of sleep, and the control group the usual daily eight hours of sleep.

During the PVT, which was administered several times a day over the course of the two-week study, participants were given a clicker and were told to press its button whenever a stimulus appeared on a computer screen. The test identified lapses in alertness — when a participant failed to click when the stimulus appeared, it was attributed to a lack of alertness.

Sara Mouhktar, a sophomore double major in English and psychology, claimed the chasm between the way the participants felt and their actual performance did not surprise her. “We’ve learned so much about the importance of sleep for memory consolidation,” Mouhktar said. “So maybe if we aren’t conscious of it and think we could still be fine after minimal sleep, it still affects us.” Mouhktar claimed that because she views sleep as “super-important for [her] general health,” she gets an average of seven hours of it a night.

Unfortunately, sleep deprivation seems to be a major problem for some Carnegie Mellon students, like Parikshit Mistry, a second-year business administration major in the Tepper School of Business. “Up until [this] semester, I wasn’t that involved in activities on campus,” Mistry said. “I used to get about six hours of sleep. For me, I guess six hours of sleep is good enough.... I’ve been a near 4.0 student [until now].”

However, because he’s recently gotten more involved in other campus happenings, Mistry has noticed a direct correlation between the amount of sleep he gets and his academic performance. “Now I barely get four hours of sleep a day,” Mistry said. “It’s definitely taken a toll on my grades and performance ... more so on my motivation, you know, because I feel tired, stressed out.... The last thing I want to do after all my classes and activities is go back to my books and stuff.”

Vincent Kiang, an ECE graduate student, is taking 75 units this — his last — semester. Kiang will be completing Carnegie Mellon’s ECE Integrated Master’s/Bachelor’s Program (typically a five-year program) in four years, and is consequently involved in multiple time-consuming research projects, lab sessions, and presentations. However, Kiang gets much more sleep than the average college student, who, according to the McKinley Health Center at the University of Illinois at Urbana-Champaign, gets an average of six hours of sleep a day.

“My brain just cannot function with just four hours of sleep,” said Kiang. “Personally, I need eight-plus hours of sleep every day. On Saturday ... I tend to get 10–11 hours of sleep.” Kiang, like most other Carnegie Mellon students, has had to stay up at times to finish homework assignments or study for an upcoming exam.

“To some degree it helps,” he said. “I’ll try and stay up late just to make sure I cram everything in, because [otherwise] what can I do on an exam, even in my best condition. But I’ll make sure I get the most important details down [and] I’ll make sure I get a certain amount of sleep.... I’m not an all-nighter person.”

Mouhktar also seemed to echo Kiang’s views. “A lot of the time, I decide to sleep early and wake up early to finish whatever I was doing,” she said. “I guess because I’ve read a lot about the importance of sleep, I try to prioritize it more. But that’s not to say that everyone should sleep more. I know a lot of people who can pull all-nighters and do amazing on their exams. I just can’t.”

So why are there extraordinary students, like those Mouhktar describe, who can get away with relatively little sleep and still maintain great cognitive performance? Shell gave insight into one possible reason, claiming “researchers are exploring genetics as one explanation for why sleep needs vary.”

For other normal, sleep-deprived students, she offered some professional advice. “Take naps! If you cannot get 7–9 hours of sleep in a night, naps between 30–60 minutes can help improve alertness and productivity.”