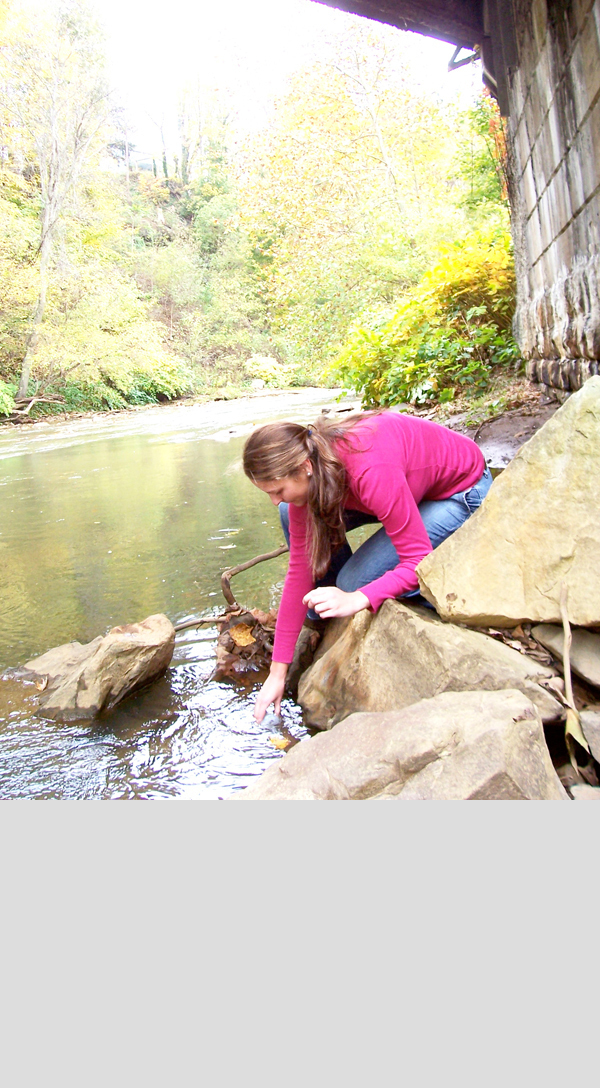 Civil and environmental engineering graduate student Jess Wilson has been sampling water from the Monongahela River and surrounding streams for the past two years. Pictured above, Wilson collects a sample of water from Redstone Creek to be analyzed for its bromide content, among other various pollutants. (credit: Courtesy of Jess Wilson)

The subject of extracting natural gas from the Marcellus Shale has been a sensitive subject in southwestern Pennsylvania, as people have heavily debated the environmental impacts of the techniques used in extraction.

Just this week, the Pennsylvania Department of Environmental Protection (PaDEP) asked all Marcellus Shale natural gas drilling operators to stop delivering wastewater from shale gas extraction to 15 different wastewater treatment plants around the Pittsburgh region by May 19. This request was greatly influenced by recent research conducted by Carnegie Mellon researchers in the department of civil and environmental engineering.

“Drilling has gone on [in] this region for many, many years,” explained Jess Wilson, a civil and environmental engineering graduate student who has been studying the water quality of the Monongahela River for the last two years. “But it’s only because of hydraulic fracturing, which is this new method that involves the injection of all this water into the well, that we’re seeing all of this produced water come back up out of the well that is really, really high in chloride and bromide. So that’s where you have all this wastewater that needs to be disposed of somewhere.”

The Monongahela River serves as a source of drinking water to over 800,000 people in southwestern Pennsylvania; among other contaminants, Wilson has been focused mainly on bromide levels in this river’s water. Bromide itself is non-toxic, but when it reacts with chlorine that is used during treatment, it forms brominated byproducts that have been found to be carcinogenic to humans.

“I think the first obvious thing you have to do is to not put bromide in [the water] in the first place. If you have really low concentrations of bromide, the formation of brominated byproducts will be really low,” Wilson said.

Historically, bromide levels have been reasonably low in river waters in southwest Pennsylvania, but Wilson and colleagues observed a spike in the bromide concentrations along the Monongahela River in July 2010. After normalizing for several external factors that could influence the bromide levels, such as river flow and temperature, the team of researchers says that the levels have not dropped back down since.

“Whenever I was asked all week, ‘What’s causing all the bromide?’ I said, it’s easy — it’s our addiction to fossil fuel,” said Jeanne VanBriesen, a professor in the department of civil and environmental engineering who advises Wilson and leads Carnegie Mellon’s work in water quality research on the Monongahela River. VanBriesen explained that the increased bromide levels are a result of either wastewater from coal-fire power plants or from Marcellus Shale wastewater. However, research performed by the Pittsburgh Water and Sewage Authority indicates that wastewater from extracting shale gas may be a large contributor.

The Marcellus Shale Coalition has acknowledged the research, and released a statement on Tuesday with regard to the situation: “Research by Carnegie Mellon University and Pittsburgh Water and Sewer Authority experts suggests that the natural gas industry is a contributing factor to elevated levels of bromide in the Allegheny and Beaver Rivers. We are committed to leading efforts, and working alongside DEP and other stakeholders, to address these issues quickly and straightforwardly, and support the appropriate action taken by DEP today.”

“This was an earth-shattering statement to make,” VanBriesen said in response to the coalition’s acceptance of responsibility and willingness to fix the problem of bromide contamination. As VanBriesen’s research group continues monitoring bromide levels in the region’s river water, the verdict is still out on whether or not PaDEP’s request will be accepted.