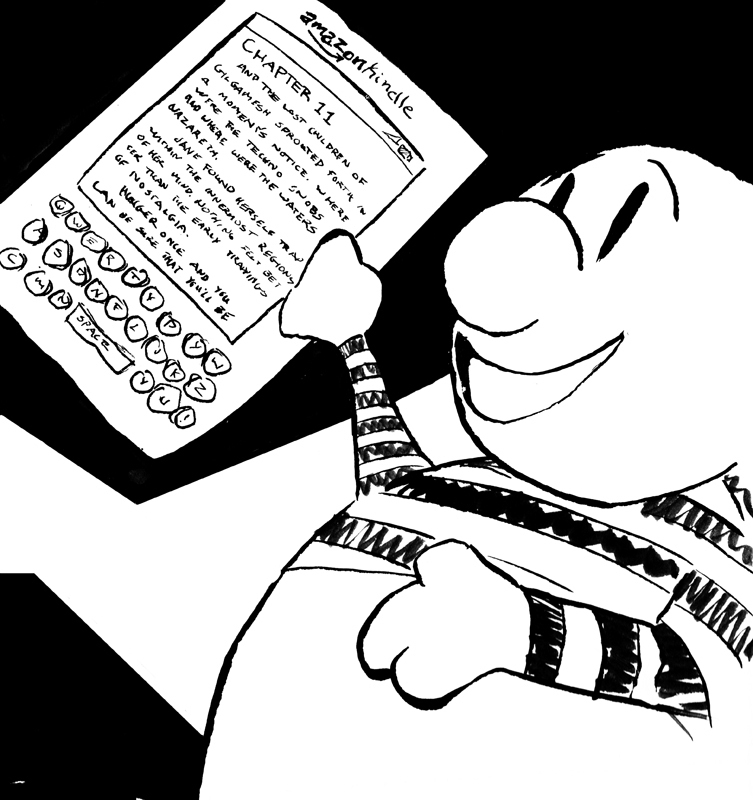 The online retailer Amazon just released a discounted version of its best-selling, best-reviewed, and most-wanted item: the Kindle. The device is an electronic book reader that boasts a variety of advantages over normal books as well as other hand-held devices with large displays.

The technology behind the screens of electronic book readers dictates both their benefits and their limitations. These screens are complex to manufacture, as they require very small and durable parts, but the basic principle behind them is fairly simple.

According to PCWorld, each screen consists of very small micro-capsules on the order of 100 micrometers trapped between two transparent sheets of clear plastic. Inside each micro-capsule there exist many small balls colored either white or black, suspended inside a slimy liquid. These small balls carry charges and are free to move around inside the micro-capsule.

Recently, colored versions of these displays have also been created. They work in much the same way as the black-and-white versions, except that the top sheet of plastic is not colorless anymore; it is instead colored in small pixels, each of which has a red, blue, green, and white area. The micro-capsules beneath each area are appropriately colored to give each area a specific darkness, and the mixture of shades in each pixel creates a distinct color. Hence, the light that will reflect off the top sheet of plastic will have a different color for each pixel.

According to E-ink, the company at the forefront of developing these technologies, electronic ink has many advantages over traditional LCD displays. Electronic ink displays use much less power than LCD displays, with some e-readers only requiring a power charge once a month.

E-readers with this technology are also more durable and flexible, so displays of electronic ink can be bent much more than LCD displays can. Also, these screens cause less glare, and so they may be more suitable during prolonged exposure than LCD displays. These displays can also last for long amounts of time — up to a month without a power-charge in some cases — and actively help reduce the use of paper, which makes them very environmentally friendly.

Over the past few years, electronic ink has been integrated into more applications than only electronic book readers. It is being used to replace both paper and LCD screens for many applications.

For example, Costco just began a pilot program to replace its shelf tags with E-Ink displays to reduce the consumption of paper due to those tags. Electronic ink displays have also been integrated into jewelery that can now change its design, such as bracelets that double as watches. Bendable clocks and changing keyboards are other technologies that use electronic ink. Finally, SmartDisplayer has begun creating credit cards with electronic ink displays that do not display the card numbers unless the user of the card types in a PIN number; this technology may reduce the cost of losing one’s credit card.

While e-readers might have introduced electronic ink technology to the world on a large scale, innovations will undoubtedly mean that we will keep finding new uses for this technology.