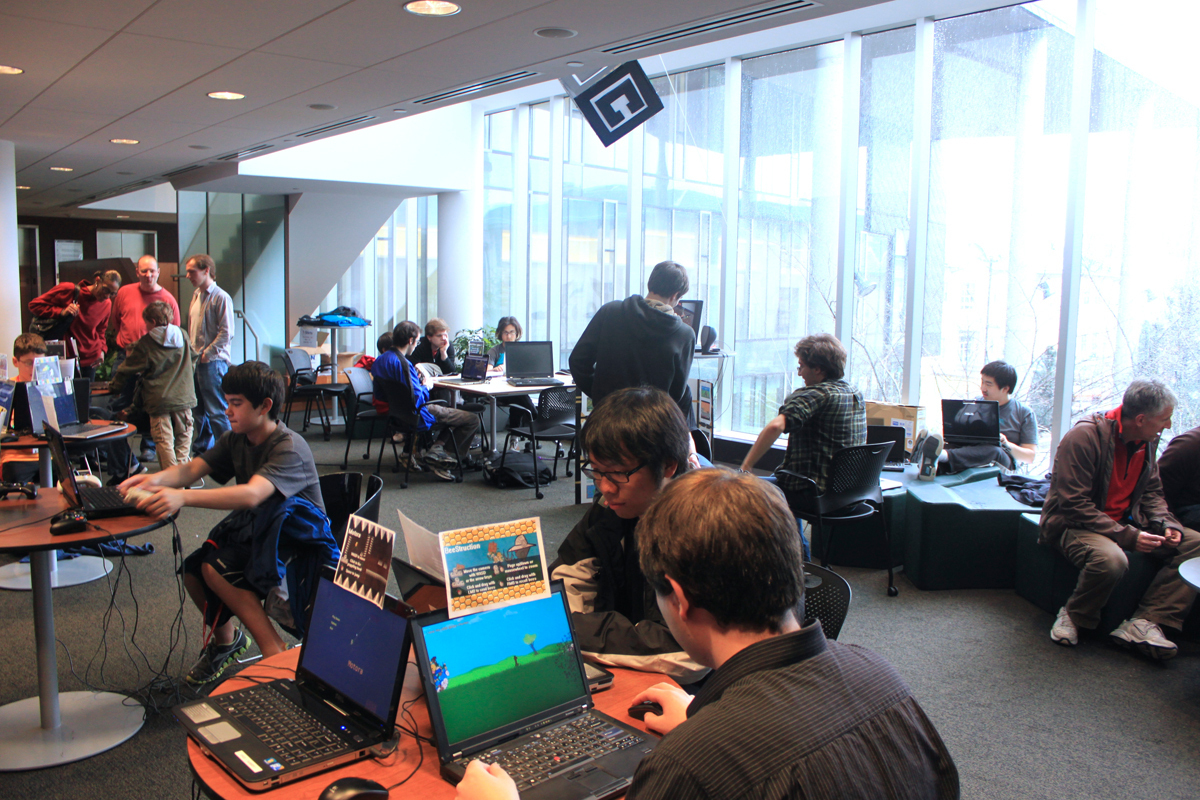 This year’s Carnival marked the second annual Game Creation Society Arcade, which took place in the Gates Hillman Complex Thursday through Saturday. The GCS Arcade is a public showcase for the projects that students in the club have taken up throughout the semester. Junior English major Connor Fallon, president of GCS, said that GCS has become one of the larger organizations on campus with about 50 members, and the result could be seen with the wide variety of games that were being shown.

This year, GCS was able to borrow laptops from the clusters to help display more games, for a total of around 15. A few of these games were GCS favorites that date back a few years, but many of them were newer projects students have been working on in the past year, including Satisfaction, Hydramen, Robot Imminent, and 30 Second Life. This year’s event also allowed some games to be tested, meaning that the designers could receive feedback on games that were still in progress to help them in the development process.

One of the games that was being showcased was Robokiller. At first glance, Robokiller is a typical first-person shooter, but that assumption is immediately turned on its head when trying to fire at enemies. Instead of a typical aim and fire control scheme, Robokiller has the player use a close-range welding gun to erase specific features of the enemy robots and to disarm them by removing their vision or armaments. The game is fairly difficult at first, as the welding gun only works at close range, whereas the robots are equipped with long-range weaponry.

Satisfaction, a solo project by electrical and computer engineering senior Kyle Neblett, was part of a week-long contest GCS held to make a game about duels. In the game, players go through a series of duels with various historical figures, whom the player must challenge by slapping them across the face, and then fighting them in a gentleman’s duel that resembles a sword-filled version of punch-out. Characters in the game include Alexander Hamilton and Abraham Lincoln. The dodging and aiming system in the game is a bit difficult to get used to, but there are special instances to attack opponents to inflict the maximum amount of damage.

Motora is a 2-D platformer with an additional dynamic: a grappling hook that can be used to scale walls, swing from the ceiling, and attack enemies. The game is well-polished, and the grappling mechanic is well-designed — swinging from platform to platform above pits of spikes looks and feels natural. The mechanic itself is a bit reminiscent of the Worms series, where the swinging and climbing worked in a similar way, but the usage in a side-scrolling platformer as the primary device — and the strong execution of it — was impressive.

Backfire is an interesting twist on the space shooter genre. After selecting a ship, the game eases the player in with levels that ask the player to bounce lasers off of slanted walls to hit boxes. One of the primary obstacles in the game is the danger of backfire — the player’s shots have the potential to bounce back and destroy the player instead. A few levels in, the game introduces enemy ships, which fire lasers that bounce similar to the player’s, except the ships are immune to backfire from their own lasers, making it easy for them to pile up a large wall of lasers for the player to dodge.

Lucid is a dark platformer where the player must use a flashlight and gun to fight his or her opponents. What quickly becomes apparent is that the game doesn’t let players use both at once, so they must use a flashlight to seek out the enemy, and then their gun to fire. This problem is somewhat remedied by the light from the gun muzzle, so once a player locates the enemy, the flashlight isn’t an absolute necessity.

Hydramen is an impressive game, made in under 45 hours, that features adorable little hydramen. The hydramen are quick to multiply, but easy to kill. In some situations, it benefits the player to “farm” for hydramen, collecting a small army before tackling an obstacle. In other situations, fewer is better: The camera falls on the middle of the stack, so jumping from platform to platform can be fairly difficult.

30 Second Life was part of a competition to make a game that plays in 30 seconds. The game takes players through someone’s life as players frantically slam on random keys to improve their character’s position in life by “working.” The game features outcomes ranging from zombie, to vigilante (identifiable as Batman), to the Messiah, based on when and where the player decides to work or not work.

Fallon said that one of the most satisfying things is to see young children play a game: “When a kid sits down and just randomly yells in the middle of the game, ‘This game is awesome!’ that’s so gratifying.” He felt that this year was an “unquestionable success” with the amount of people who attended — most of the games were being played at any given time. At the event, there were people of all ages enjoying the games, including alumni and professors with their children. It was a chance for the people at GCS to share their passion with the outside world, and to let people see the unique ideas that students are coming up with.