Panic! at the Disco releases album 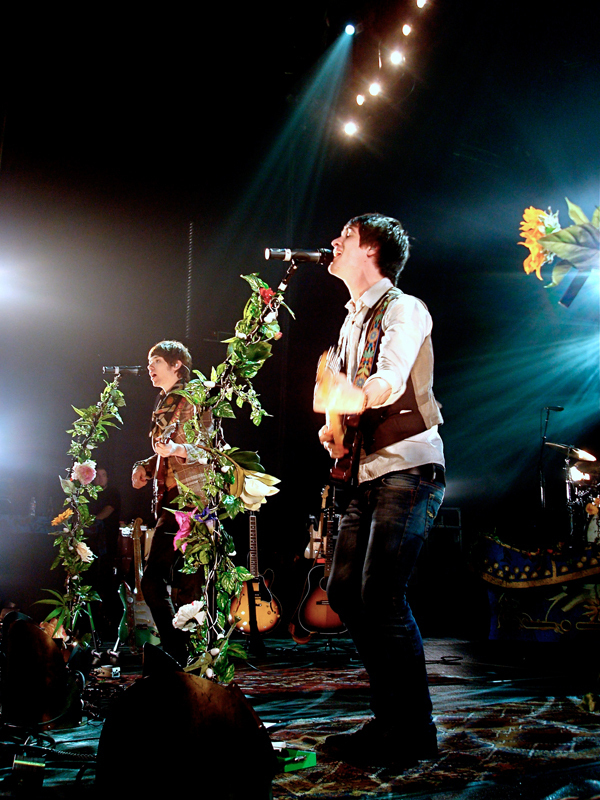 Pop-rock band Panic! at the Disco recently had a lineup change — reducing the band from four members to two — and reinstated the exclamation point in its name. (credit: Courtesy of Anna Enriquez on Flickr)

Panic! at the Disco isn’t your average pop-rock band. With an image styled off the Elizabethan and Victorian eras, Panic! is its own circus act, to the point of even incorporating literal circus acts. While Panic!’s third album, Vices and Virtues, is filled with plenty of eccentric sounds, including marimbas, synthesizers, and something that sounds suspiciously like a vibrating phone, the band has learned to reel these in and write songs that are both mature and glamorous. Many of the songs begin or conclude with experimental, but controlled, interludes.

Vices and Virtues is the result of Panic! at the Disco losing half of its members to become a two-man lineup, with singer/instrumentalist Brandon Urie and drummer Spencer Smith reincorporating the exclamation point into the name. After former lead guitarist Ryan Ross’ departure, Urie has taken over his duties as primary songwriter. This has resulted in an eclectic collection of songs on Vices and Virtues that have little in common aside from their implications in terms of the album’s title.

Panic! has deviated from its sophomore album quite a bit, but has taken the lessons learned on Pretty. Odd. and sprinkled them throughout to bring more rock into its sound. The playfulness seen in the band’s first album, A Fever You Can’t Sweat Out, has been brought back in a great way. The first single, “The Ballad of Mona Lisa,” seems to embody the heart of Panic!’s new direction as a band and the album itself. It alludes to the “Mona Lisa”’s famous smile, and the emotional layers that are hidden beneath. The single is infallibly catchy, and its personal layer and dark verses fall victim to an overpowering, shopping mall anthem.

The absence of Ross’ writing can be seen most in more romantic songs such as “Sarah Smiles,” which has none of the dark cynicism featured prominently on A Fever, yet this allows it to be much more direct when Urie addresses his girlfriend — “Oh Sarah, are you saving me?” — and, as a result, likely more accessible. “The Calendar” seems to be a song in the same vein, but it is more focused on the band’s split and the ability to move forward as individuals.

“Trade Mistakes” is perhaps the weakest song on the album, and it is easy to gloss over. The bouncy verses and the chimes used in the introduction are promising, but the chorus and bridge are a bit of a letdown.

Picking a favorite song is difficult, as Panic! is able to cater to many different tastes. For those fans of more traditional emo-pop, “Hurricane” has all the teenage energy of Panic!’s contemporaries with an added dose of funk, as well as a stylish piano and horn outro. The album’s Deluxe Edition extra tracks “Oh Glory!” and “I Wanna Be Free” channel even more teenage angst. Near opposite from these is the baroque-inspired album closing song, “Nearly Witches (Ever Since We Met).”

With such a diverse collection of songs, Vices and Virtues is able to appeal to many moods and many tastes; each track is likely to be an experience in something completely different. At the same time, the CD is held together by a charm that never gets lost.