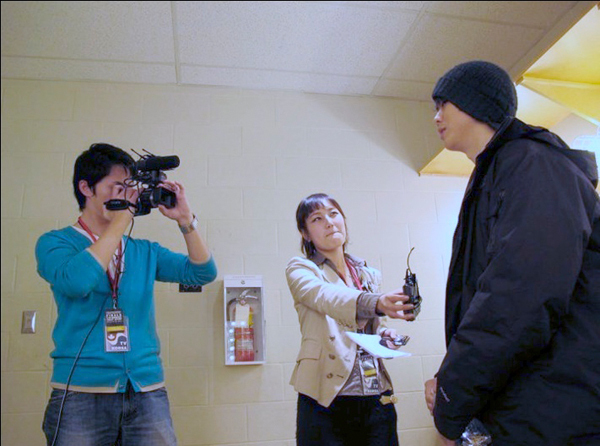 Chris Hong was interviewed by a local news channel while in Vancouver for the final round of the competition. (credit: Courtesy of Chris Hong) 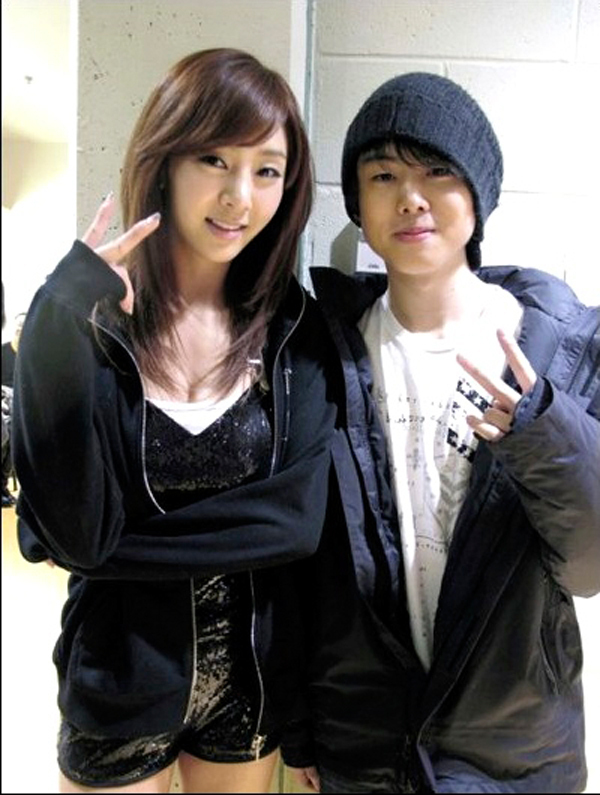 Chris Hong, right, had the opportunity to meet and open for Korean pop singer G.NA, left, as a finalist in the Koreaboo: Cube Auditions 2011. (credit: Courtesy of Chris Hong)

To get chosen to be one of the 14 top finalists for an international Korean pop (K-pop) competition is remarkable, but to be one of the opening acts for top K-pop singer G.NA? That’s epic. Chris Hong, a first-year biomedical engineering and chemical engineering major, received the opportunity of a lifetime from K-pop record label Cube Entertainment: an opportunity to showcase his talent in front of a large audience and perform as an opening act for G.NA, a Canadian-born K-pop singer.

Despite what Hong’s Korean pop successes might suggest, his interest in the genre started relatively late in his life. Hong grew up in New York and had only ever been to Korea for two months, but he studied in a Korean school and became fluent in Korean. Until middle school, Hong listened to Simple Plan, Korn, Linkin Park, Bon Jovi, and other American bands. It wasn’t until high school that he was introduced to K-pop by one of his Korean friends. Hong stated in an e-mail, “Almost instantly I was hooked. I found the rhythm and the beats to be extremely catchy.”

But landing a place in the Top 14 didn’t come easily to Hong. Since he wasn’t raised performing K-pop, he joined International Freestylers at Carnegie Mellon to learn breakdancing ­— as Hong explained, “Not only does a K-pop idol have to be trained to sing, but they have to be trained to dance and act as well.” He soon picked up other performance-based techniques, like audio recording and rapping, in order to get ready to submit an audition tape. He also had to take out time to rehearse effectively. “I practiced singing or rapping music by continuously listening to a particular song and by getting familiar with its beat and rhythm. From there on, I would record myself and upload the video onto my YouTube channel in order to receive feedback from other YouTube users,” Hong said.

Before trying out for Cube Entertainment, Hong auditioned for Munhwa Broadcasting Corporation’s “The Birth of a Great Star,” a Korean televised singing competition. He uploaded a YouTube video of himself singing a K-pop track as his audition tape, but was disappointed when he was not selected for the contest.

He then decided to practice harder for an upcoming audition with a big K-pop label called JYP. However, through YouTube, he learned of Koreaboo: Cube Auditions 2011, an audition with Cube Entertainment, which supports Korean pop stars such as B2ST, G.NA, and 4Minute, that was sponsored by the English K-pop website Koreaboo. “I’ve always wanted to audition for Cube Entertainment because I wanted to be in a group [similar to] B2ST, but until now, most auditions were held only in South Korea,” Hong said.

Hong sent his audition to Cube Entertainment in December and waited to hear back from the selectors. Hong explained, “The whole audition consisted of three rounds. First, Cube notified you that you passed the first round via e-mail and then you had to send in another video for the second round. You would then get a call from Korea if you had passed onto the final round, where the top 14 finalists would perform live in Vancouver, Canada, for a chance to get a contract with Cube Entertainment.”

Hong’s optimistic streak was noticeable even while he waited to hear back from Cube Entertainment. During the two-month wait, Hong wrote lyrics to a song called “DreamMaker,” which was his remix version of “Just a Dream” by Nelly, expressing how he “won’t ever give up trying to become a Korean pop artist.”

Finally, when Hong did hear back in February, he was congratulated on being one of the 14 finalists in the competition. Chosen from over 3,000 auditioners, he was told that he would be performing in Vancouver along with the other finalists, with the whole competition being broadcast on Canadian news.

The competition took place at the Bell Performing Arts Centre in Vancouver on Feb. 27. Although the winner of the competition was a dancer named Edo, also known as “Blackmamba,” Hong has no regrets. “I’m so glad I went for the competition because the experience was amazing,” he said. “I met extremely talented people, got a chance to meet G.NA — the first K-pop idol I’ve ever met — and most importantly, had the chance to live my dream.”

Even though the competition has ended, the experience has continued to influence Hong’s life. Hong said, “The other finalists and I got really close due to the competition, and I almost feel like we’re one big family. We’re still in touch and maintain contact with each other via Facebook and have set up a new YouTube channel where we are uploading collaborations with one another.”

And the best part about participating in the competition? “Honestly, this was the first time I’ve ever sang or rapped in front of a large audience. On my way to the performance in the cab with two other finalists, I was very nervous, but during rehearsal I felt comfortable and excited to perform. So, undoubtedly, the best part about the whole journey for me was performing on stage and getting to know the other finalists.”

Hong’s love for K-pop hasn’t come before his love for American music. He still listens to and thoroughly enjoys American artists such as Daughtry, Jason Derulo, Nelly, Eminem, and Ne-yo. Hong said, “I guess you could say that I now listen to a broad range of music, ranging from rock to heavy metal to rap to K-pop.” One might feel that American pop is very different from K-pop, but Hong claimed, “Besides the language, Korean and American pop songs are very similar. Just the way Korean pop artists are ‘developed’ is different. In America, one can just sign a contract and start making albums and start performing on stage like Justin Bieber. But in Korea, one must first go through years of hard training before debuting on stage.... There are so many trainees in each Korean music industry, but only a few get elected to be debuted, and most of the times trainees quit their training because of the ‘slave-like’ environment and the hard, tiring years of training.”

Despite the similarities between Korean and American pop, Hong remains skeptical about America’s acceptance and response to K-pop. Although K-pop is gaining popularity worldwide, few American artists have recognized this fact. Hong feels that “Korean pop music has been popular worldwide, and American artists such as American music producer and rapper will.i.am have recognized how popular K-pop has been. In fact, he is currently working with 2NE1 [another popular K-pop group] to release an English album, but not many artists have followed suit as of yet. Other popular K-pop artists such as BoA, Wondergirls, and Rain(Bi) have come to America to release their music with successful results.”

The United States doesn’t have a very large audience for Korean pop when compared with countries such as Japan and Taiwan. Hong believes the existing audience for K-pop in America is mostly because of the Internet. He said, “Because YouTube provides free access to music around the world, uploading K-pop music videos onto YouTube has made it even more popular here in [the] U.S.”

And what about at Carnegie Mellon? Most of Hong’s friends don’t listen to K-pop, but occasionally one comes across students who enjoy listening to it, regardless of whether they speak and understand Korean, something Hong finds encouraging. Hong stated, “I don’t think Carnegie Mellon has a large Korean pop scene when compared to other colleges such as Rutgers University, which had a winter festival for K-pop and brought really popular Korean artists such as Jay Park [to its campus] for performances.” Now that Carnegie Mellon has a Korean pop singing sensation on campus, though, perhaps its music scene will grow.