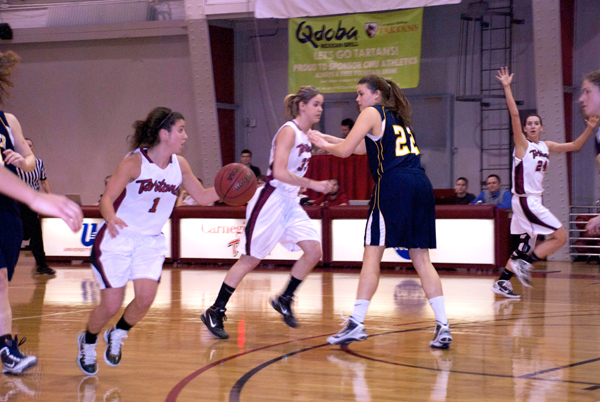 First-year Gina Tudi (#1) looks for an open teammate to pass the ball to during the game against the University of Rochester. (credit: Jessica Sochol/Photo Staff)

The Carnegie Mellon women’s basketball team suffered a tough loss on Friday night, falling to the nationally No. 16-ranked University of Rochester Yellowjackets, 63–39. The Tartans were not on top of their game on Friday as they shot only 36 percent overall and 46 percent from the free-throw line. Unfortunately, the women also could not control Rochester’s firepower, as seven Yellowjacket players scored six points or more in the game.

Junior Jacki Cortese summed up the loss, “We just came out flat in the first half, and even though we had a better second half, we couldn’t get back in it.” The loss drops the Tartans to a record of 2–21 on the season and 0–12 in University Athletic Association (UAA) play.

Even in the defeat, the Tartans saw strong performances from Cortese and first-year Jacquie Shaw. Cortese recorded 12 points and five rebounds, while Shaw had eight points and five rebounds. Friday’s game was just another consistent performance in a solid year for Cortese, who is averaging 12 points and six rebounds per game in the season, which is the highest on the team in both categories. Shaw has been the most consistent and productive first-year player for the Tartans, averaging seven points and four rebounds per game.

In Friday night’s game, the Yellowjackets were led by Jackie Walker with 14 points, including two three-pointers, and Madeline Korber with 10 points.
The win puts University of Rochester in third place in the UAA and potentially in position for postseason play.

The Tartans took the court again on Sunday against Emory University, looking to avenge their loss. The game against Emory was Carnegie Mellon’s last home game of the season, and Cortese stressed the importance of ending the season with a win. “We’re just hoping to end the year with a good home win and a win at Case,” she said.
The results for Sunday’s contest can be found on the Carnegie Mellon athletics website.

The women will take the court for the final game this season on Saturday at 3 p.m. against Case Western Reserve University in Cleveland, Ohio.