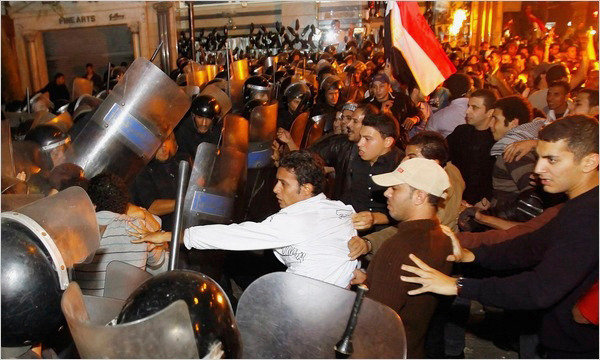 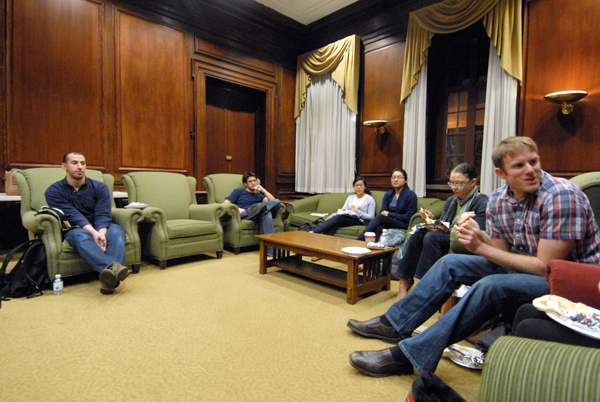 Students gathered in the Mudge piano room to address the reasons for the recent Egyptian riots. (credit: Nicole Hamilton/Comics Editor)

Carnegie Mellon’s weekly “Speak Your Mind Dinner and Dialogue” series held a discussion last Thursday about Hosni Mubarak’s Feb. 11 resignation from the Egyptian presidency and the revolution that caused it.

The event was organized by Amal El-Ghazaly, a senior electrical engineering major who has family in Egypt. Khalid El-Arini, a doctoral student in computer science, and Nico Slate, a history professor, facilitated. El-Arini also has relatives in Egypt.

Over hummus and pita bread, students and faculty discussed how and why Egypt got to this point.

One major cause of the revolution, El-Arini believes, was satellite television, especially cable news. “Satellite TV is very prevalent in countries like Egypt,” El-Arini said. “Even the poorest ramshackle hut in the village, like my ancestral village where my parents grew up on the Nile delta — they might not have lots of other things, but they have a satellite dish.”

In recent years, citizens of Egypt have been able to watch news channels other than the state-sponsored one. For the first time they can see a relatively uncensored, and sometimes critical, view of their government.

El-Arini said that technology also played a role in the revolution. “I don’t want to call it the Facebook and Twitter revolution, but clearly these were tools that helped people. You have this young generation of Egyptians and Tunisians who are very Internet-literate, and they were able to organize on Facebook. So we have the Google exec who starts a Facebook group to start a revolution that’s broadcast on Twitter and YouTube. I don’t think you can have a more high-tech revolution than that.”

Youths were not only helpful because of their tech savvy, but also because of their prevalence. The overall populations of Egypt, Iran, and much of the Middle East have grown younger in the past few decades.

“The majority of the people that went out into the streets were younger than [Mubarak’s regime],” El-Ghazaly said. “They were born after he started ruling.”
“It’s not just that young people are more inclined to go out and protest, which they are,” Slate said. “It’s also that young people need jobs, and they want good jobs, and they want to not just be at the level of their families, but they want to actually go further than that.”

Reactions from outside Egypt are also possible factors in the protests. Expatriates and their families, in particular, supported their relatives in the country. After the Egyptian government paid people to pose as pro-Mubarak protesters — and to beat the opposition protesters with whips — El-Ghazaly called her aunt. “I told her that everyone in my family better not leave the streets; they better stay there and fight for their country, and keep pushing for it, because they have made progress and they should keep going.”

International eyes may have stayed on Egypt, Slate said, because of the expanding role of international media. “There was just too much information for people to get the wrong story,” he said. Reports of journalists such as CNN’s Anderson Cooper being beaten in protests curried favor with the outside world. Such incidents also incited journalists to cover the story more aggressively. “Egypt became [Cooper’s] personal crusade over the next two weeks,” El-Arini said. “My uncle called me from Egypt, where he gets CNN, and said, ‘You know, Anderson Cooper, I think he’s Egyptian now.’ He took it personally. And everybody watches Anderson Cooper.”
After the group established some of the main causes of the revolution, the discussion turned to the future, both inside and outside of Egypt. Just as the successful ouster of longtime dictator Ben Ali in Tunisia sparked the Egyptian protests, Egypt’s widely covered and successful revolution has inspired citizens of other Middle Eastern countries to take to the streets. Movements have started or restarted in Iran, Yemen, and Bahrain. Nobody, however, is sure of how successful the new revolutions will be. Richer regimes, especially those with more violent militaries, may be harder to topple.

“I remember when the article came out about people being offered a certain amount of money in Cairo to side with the regime,” Slate said. “Well, you have to put yourself in such a person’s shoes. This calculation’s going to go through their head. How likely is my participation going to make a difference? How much money is being offered to me, and what’s that money going to do in my life?”

Slate had similarly pessimistic views about Egypt’s future. “My concern is that even if these protests lead to some form of democracy, that whatever form that takes will be structured in a fashion that it won’t change fundamentally the realities that led so many people to protest in the first place,” he said.
He admitted, however, that there are other possibilities. In particular, Slate believes, it is possible that Egypt’s “leaderless revolution” could lead to a more egalitarian and diverse democracy than even the United States, which, after all, has a history of being led by wealthy white men.

El-Arini took an optimistic view. “I don’t think we should underestimate the psychological effects this revolution has had on the people of Egypt,” he said. “I talk to my uncle or aunt in Egypt, [and] they say that people are volunteering to do everything. Tahrir Square has never looked so clean. Across Cairo, people are getting out and doing things. They’ve taken their country back.” Moreover, he said, many of the country’s brightest expatriates — including a Nobel Prize winner in chemistry — are considering moving back to Egypt to help out.

People in Egypt are not the only ones feeling the effect of the revolution. El-Arini is proud of and excited about a democratic Egypt. “I was born in Virginia,” he said. “Whenever someone would ask me, ‘Where are you from?’, even if they were clearly trying to figure out my ethnic background, I would say, ‘I’m from Virginia.’ And they’d say, ‘No, where are you really from?’ I’d say, ‘Fairfax County.’ But a professor walked by my office last week and said, ‘Are you Egyptian?’ And for the first time in my life, I said yes.”