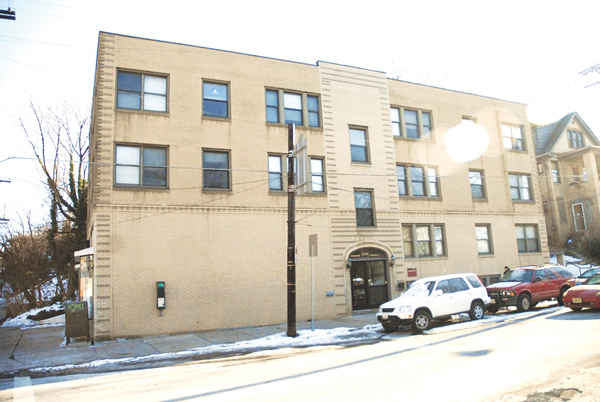 Location: At the corner of Forbes Avenue and Margaret Morrison Street

Style(s) of housing: Apartment — one-bedroom (two students), two-bedroom (four students), and four-bedroom (seven students). There is one double-occupancy apartment in the basement that currently houses first-years.

Kitchens: One or two full kitchens per apartment

Lounges: A TV lounge and exercise room is shared with Margaret Morrison Apartments.

Other amenities: Two washers and two dryers are in the basement. The Frame, a small student-run art gallery, is also located on the first floor.

Woodlawn Apartments may be one of the older and more run-down housing options on campus, but it is convenient for walking to class, and it’s right on the Forbes Avenue bus routes that can take you anywhere else that you’d like to go.

The bedrooms and living rooms both boast plenty of space, a definite upgrade for those used to sharing cramped quarters. Some rooms have hardwood floors, and others have thin carpeting. The furniture has been recently updated, as have some of the appliances and bathroom fixtures, which helps combat the run-down stereotype of the building.

This year, there have been repeated plumbing problems in the building, but maintenance has been quick to fix them and get things back in order. Several times per semester, The Frame art gallery, which is housed in the first floor of the apartment building, has loud parties that can be heard throughout the building.

Woodlawn Apartments is great if you want to live with a big group of friends, since each apartment houses a lot of people. People generally keep to themselves, but this does not mean that residents do not participate in housing activities. There are relatively few students in the building, so you’ll probably get to know many of the other students that live there. Woodlawn is a good choice if you want a small community and are looking for apartment living on campus.