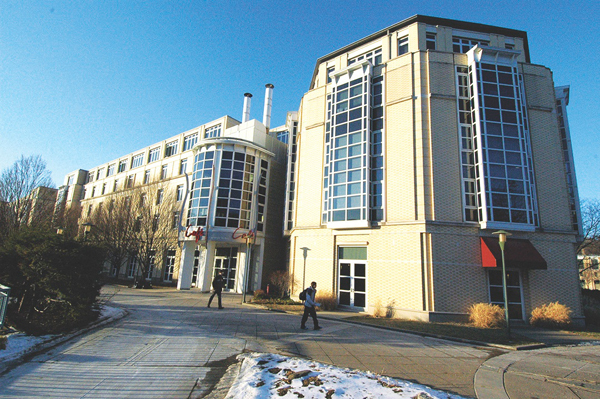 Location: Adjacent to Gesling Stadium, next to the University Center

Resnik and West Wing are the ideal dormitory choices for students who aren’t ready — or aren’t willing — to move off campus but want a bit more of a grown-up place to live than a typical dorm. While students in these dorms have the chance to be more independent, they also boast a quick walk to any of the academic buildings on campus, a definite benefit for those mornings when you just can’t seem to stop hitting the snooze button.

Both dorms consist primarily of suites, which are made up of two doubles and a single with a common bathroom and lounge for the suite. A limited number of prime singles and doubles do exist in the buildings as well, though they are not as well known.

Resnik and West Wing are optimal for a group of friends who wish to live together but want to maintain their proximity to campus and the other advantages — like free toilet paper and a once-a-week bathroom cleaning — that living on campus offers. Students mostly stay inside their suites, leaving the hallways relatively quiet. The lounges do fill up, however — usually with groups of students either working on homework or hooking up their video game systems to the television.

Both buildings do offer kitchens on certain floors, which is nice when you’ve had your fill of The Exchange and Sí Señor, but if you don’t feel like cooking, Resnik is home to a number of dining options. There is the Tartans Pavilion, the Carnegie Mellon Café, and Resnik Café. In particular, Resnik Café offers a variety of choices, including sushi, Indian cuisine, and comfort foods, among others.

With the numerous amenities that Resnik and West Wing offer, it is not surprising that both of these dorms fill up early in the room selection process. Hopeful residents are advised to find a friend who can pull them in.