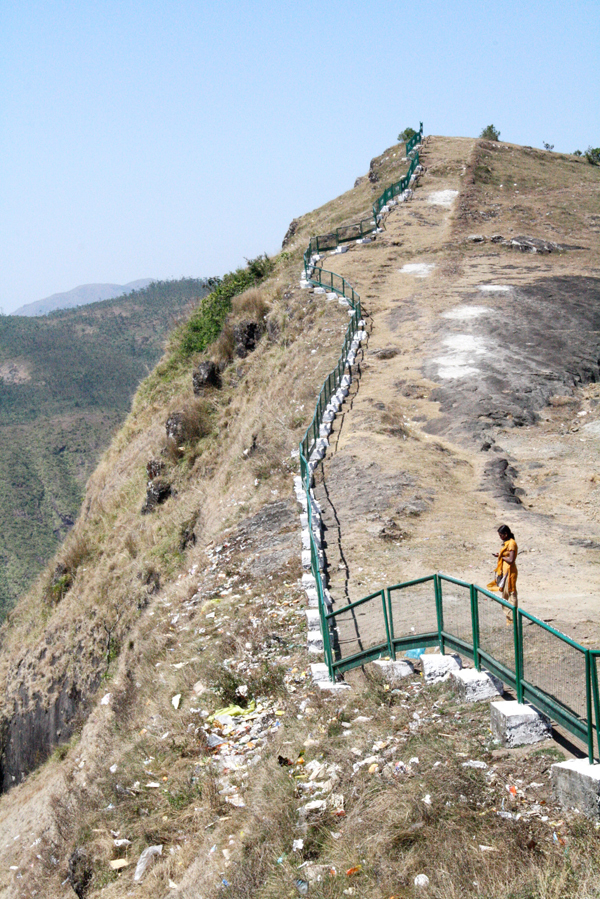 The author took pictures while traveling throughout Kerala, a state in the southwestern part of India, but felt that even pictures could not fully capture the impact of the scenery. (credit: Caroline Kessler | )

You have been saying that you honestly don’t know what to picture when you think of India. In your last letter, you mentioned Slumdog Millionaire and Eat, Pray, Love as what this place might look like. I had similar images in my head, but now that I am here, in this tiny part of the South, I can try to help you picture India with words.

When our group of 16 American and Canadian students traveled together throughout Kerala, I put my camera away after a few days. Sure, we visited beautiful historical and cultural points, sailed along the backwaters, toured a spice plantation, and trekked through some of the highlands. But instead of photographing, I had my notebook in hand, making lists, writing letters that may never be sent, and blind-contour sketching the faces of our group. I didn’t think a lens could even capture everything we were seeing.

But now that we’ve settled into the groove of being university students in India, there is a completely different world that I want to describe to you. It’s small and becomes easier to navigate each day. We have the weekends to explore, but really, the campus and the nearby town of Pondicherry — affectionately known as “Pondy” — are what I want you to be able to picture.

I’m writing this at my desk in my room of the Foreign Students Hostel (what we may call a dorm), and I’m staring out the large window for inspiration. It comes easily — there are palm trees and greenery scattered around a large, easy-to-walk path.

We walk about 15 minutes to class through the campus, which is 800 acres. Envision similar palm trees and leafiness scattered throughout, with students and professors zipping around on bicycles and motorbikes. I am sweating by the time I get to class, and sometimes the professor doesn’t even show up — just a note on the chalkboard saying that class is canceled, if that. Then there’s an equally sweaty walk or bike ride back to the hostel.

I’m taking a 19th-century British fiction class with about 60 Indian students. We just read Pride and Prejudice, and talking about marriages formed out of love and compatibility with these students is interesting, as many of their marriages will be arranged. Other classes, like Christianity in India, I just take with people in my program.

Now, try to forget the cold and think of the beach — it is a stone’s throw away from where we live. In the afternoons, I cross the glorified highway that runs alongside campus, called the ECR (East Coast Road) to walk through a small village.

When you picture crossing a street, don’t picture any street you’ve ever crossed before. It’s British-style, so look to the right first. Check for cattle, stray dogs, large buses with men hanging off the sides, horn-tooting autorickshaws, motorcycles, bicycles, and other pedestrians trying to do the same thing you’re doing.

When you finally reach the village, I think you’ll get some of the imagery you mentioned, like the barefoot children. Next to the straw huts directly are modern, three-story houses. Closer to the water, women wash their clothes on rocks, chickens squawk, and dark-eyed crows are always pecking at food.

The beach is small and the waves are rough — but here, it is easiest to forget where you are. It could be a deserted American East Coast beach. The noise fades away, and if you look straight ahead, you can avoid seeing the fishermen squatting in the sand to relieve themselves.

Do you remember when you were in Chile, with the obvious feeling that you didn’t fit in? That is every day here, walking to class or to the beach or taking the bus into town. We cannot change the color of our skin, no matter how traditionally we dress. The women wear salwar kameez or churidas, as they are known in the South, which is a long tunic top, a scarf, and long pants — light, made of cotton, and in the most fantastic colors. I have a few of these clothes, but after being here for more than a month, I realize how marked I am by my skin and their assumptions. It is less about being from America than being foreign, Western, and presumably wealthy.

I’ve mentioned going into “Pondy” before, and that is a series of photographs in itself. Picture this: Wait in the hot sun for a bus that comes chugging up, blaring music. You hop on the back entrance because the front entrance is for men, and then try to find a seat. If it’s around five or six o’clock, every woman is trying to get home, so you will be crushed among a sea of saris and churidas, sweating as usual.

You press a few coins (4 rupees, about 10 cents) into the conductor’s hand, saying “Pondy,” or wherever you are going. He will inevitably repeat it in a way that sounds the same to you but is different to him. Bobble your head yes, because a nod doesn’t really mean anything here, and he will hand you a waxy piece of paper that counts as a ticket, but is never collected or inspected.

In town, you can push your way through what now feels like a typical Indian street — no sidewalks, a collection of animals and vehicles moving at random, without the aid of traffic lights or yield signs. Because Pondicherry was colonized by the French, there is the French quarter, with wide, quiet streets, leafy oaks, tiny bakeries and rooftop cafés, and numerous French people speaking actual French. That is the only other place I have found where I can forget, for a moment, that I’m in India.

But I don’t want to forget that I’m here, really. The time is already careening by, each day a whirlwind of attempting to go to class, sweating, reading about things I’m not taking classes on, and talking — always talking — to figure out what is going on here.