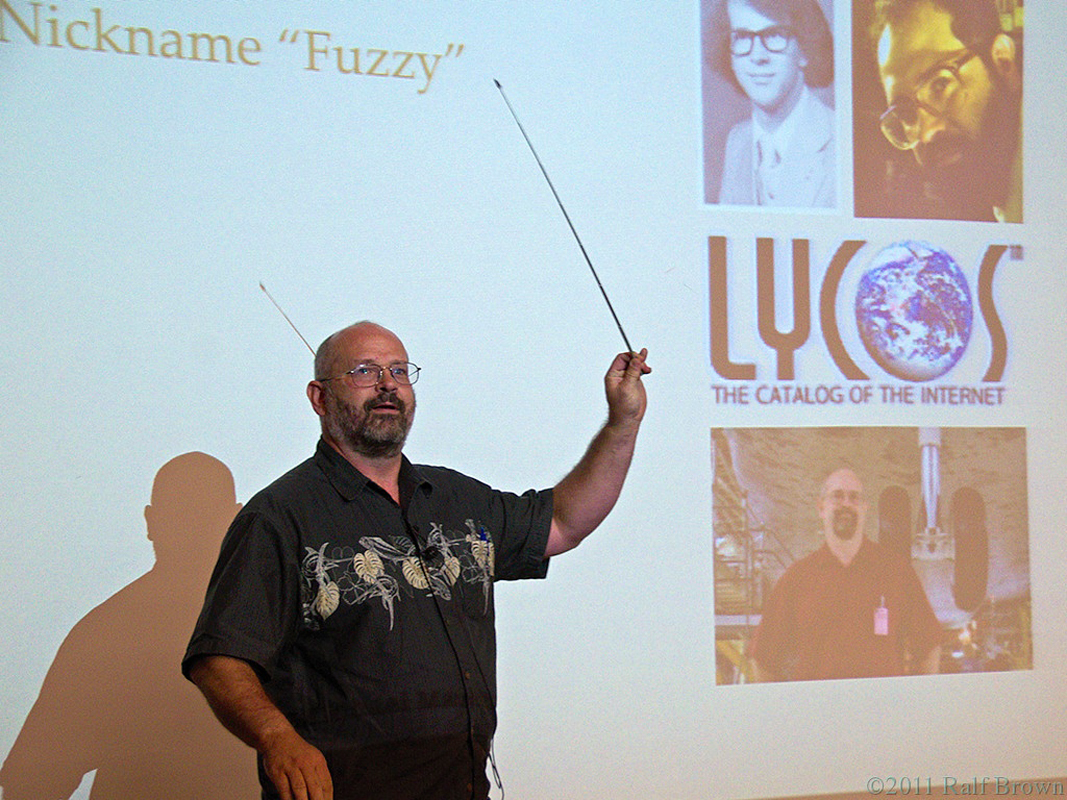 Michael “Fuzzy” Mauldin, a Carnegie Mellon alumnus and creator of the Lycos search site, spoke about his career and offered business advice at the Language Technologies Institute colloquium this past Friday. (credit: Courtesy of Ralf Brown)

“Being in an internet company is like being inside a tornado,” said Michael Loren “Fuzzy” Mauldin (SCS ’83, ’89), founder of the internet search company Lycos. Mauldin addressed students and faculty last Friday in a Language Technologies Institute colloquium lecture that focused on converting ideas into fast-growing and successful technology companies.

Mauldin created the Lycos search engine from three pages of code while working as a faculty member at Carnegie Mellon in 1994. “I took information retrieval, applied it to the World Wide Web, and sold it to someone else,” he said. “I dressed something up as a pet rock that people would pay money for, and I got something out of it.”

According to Business Insider, Mauldin also co-founded Conversive, a company that specializes in automated conversation technology, in 1997. After competing in televised BattleBots competitions in 2000, he went on to retire in Austin, Texas, where he currently raises cattle with his wife and continues to compete in robot battles.

In his talk last Friday, Mauldin broke down the business theory behind his commercial success. “The first thing you do is invent something ... and then align your ducks,” he said, referencing how he had lawyers, accountants, and licensing agreements on hand, even before trying to commercialize his product. Mauldin also touched on topics like university intellectual property rules, patents, and stock options. The intellectual property entitlement split for Carnegie Mellon is currently 50-50, meaning the inventor owns half and the school gets the other half, which is significantly higher for the inventor than other universities, such as Rice University or Stanford University.

Mauldin walked students and faculty through introductory business principles, as applied to Lycos. In April of 1996, Lycos had its initial public offering with 3 million shares, priced at $16 per share. “There are many advantages to being a public company,” he said. “One is credibility ... another is liquidity ... but there are many disadvantages to being a public company, too.” He added, “You are always worried about your stock price and what is going to happen at the end of the quarter instead of what’s going to happen in three years.”

As his story progressed, Mauldin moved on from business basics and focused on what happens to a company during an initial public offering (IPO) — mergers and acquisitions basics that cover debt and equity, how a company is funded, accretion and dilution, and how a transaction affects a company’s earnings per share. He also explained the IPO pricing process — when a company goes public, a split or reverse split must occur to push the share price into an ideal target range. In Lycos’ case, it needed to be at least $10, since shareholders would not feel comfortable buying a cheap $2 or $3 stock, but it could not be more than $100 since the expensive price would scare investors away. When Lycos went public, share prices shot up to $29 after the first day of trading. “This was the fastest company to ever go public ­— [it took] a little over nine months,” he said.

Mauldin jokingly claimed that he predicted the internet bubble (by selling Lycos) before many other internet companies went public, and that he started the frenzy of internet company IPOs in the late ‘90s. “What I am proudest of is not that I became wealthy, but that Lycos helped make search free to the world,” Mauldin said. Not only did his company allow people access to information found on the other side of the world, but he also “showed there was money in search.”

All in all, Mauldin gave future entrepreneurs this parting advice: Not only should one invent something, but one should also get paid to take investments and have them grow as large as possible, to secure both the company and stockholder satisfaction.

Although Mauldin’s success occurred during the early ’90s, much of his advice is still very relevant. “Everything he said about startups and the IPO process is just as valid today. Success gets repeated quite frequently,” commented Michael Shamos, a former lawyer for Lycos and a professor in the school of computer science. “Consider Facebook and Groupon, which are worth billions, and numerous companies worth over $100 million two years after startup.... The ones that die are those that don’t adapt.”