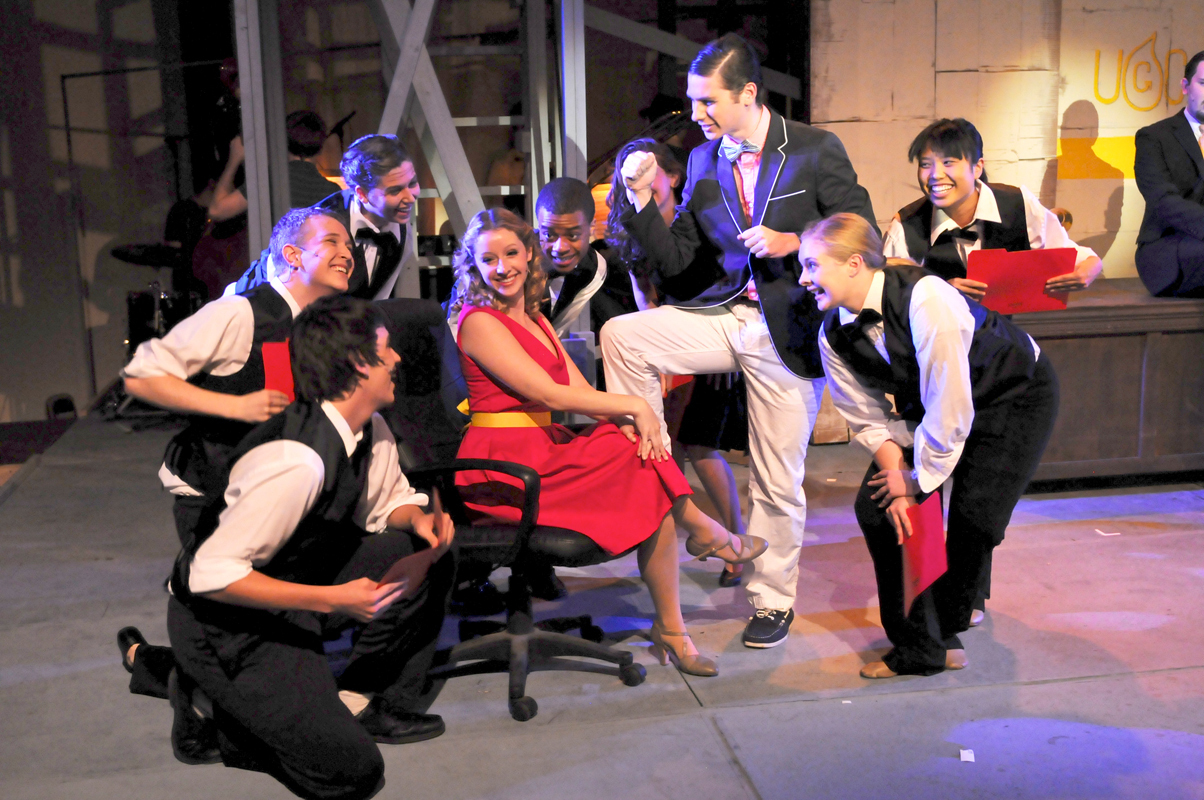 Hope Cladwell (Jaclyn Ross) comes to work for the Urine Good Company, where the employees sing praises about her father, the company’s owner. (credit: Courtesy of Guillermo Gomez) 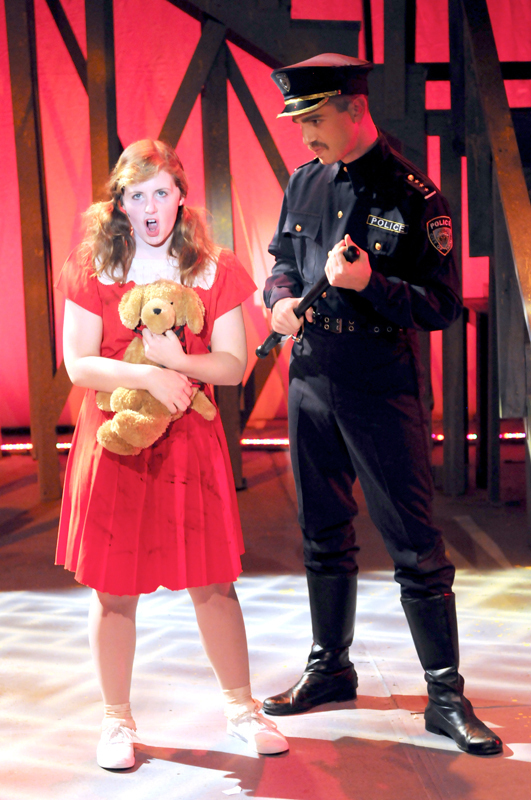 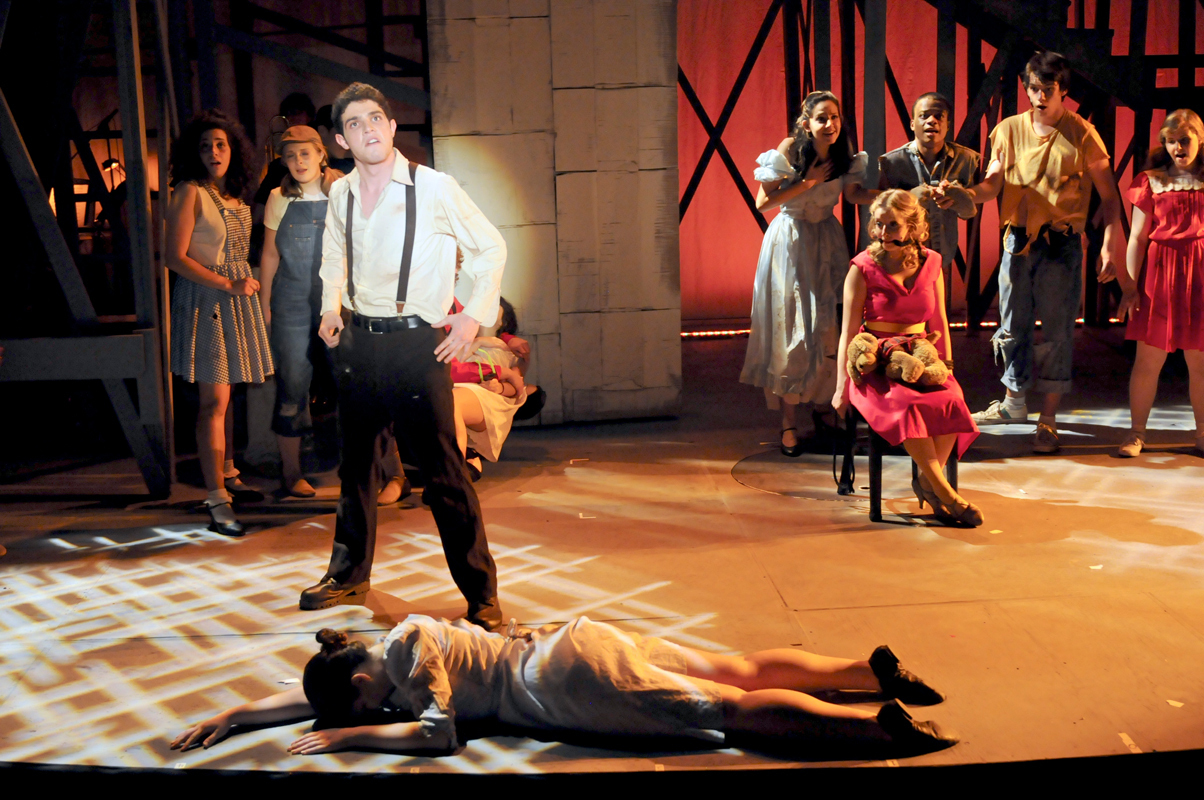 The story is simple. In what seems to be a rapidly deteriorating society, a drought has been going on for decades; as a means of controlling water consumption, toilet use has been privatized. The play depicts the struggle of a segment of a small town overrun with residents who cannot afford to pay to use the amenities of the Urine Good Company.

The production was short of neither puns, nor great comedic timing, true commitment to character, and wonderful technical executions.

Many people can attest to Scotch’n’Soda’s legacy of showcasing top-notch performances. On opening night, a student from Chatham University had a lot to say during the intermission. “This show is new to me. It’s fantastic! Everyone is so funny and talented and I love the political satire,” said Lindy McQuinn, a graduate student in counseling psychology. “Who doesn’t love a little political satire in this time?”

Some of the best aspects of the production were the copious references made to several other musicals including Annie, The Wizard of Oz, The Lion King, A Christmas Carol, and You’re A Good Man, Charlie Brown. The cast mimicked many of the characters from these well-known productions. For instance, the character Hot Harry Blades, played by first-year CIT student Canute Haroldson, is meant to be a reference to Sweeney Todd in that he wore a blood-red shirt with a black leather vest and wielded a shaving razor.

Scotch’n’Soda’s adaptation emphasized these references even further. “Much of the references were cranked up, such as with The Lion King,” said Matt Zurcher, a junior in the Bachelor of Humanities and Arts program for musicology and film studies who was the assistant director for the Scotch’n’Soda performance.

Hope Cladwell, one of the major characters, was played by first-year psychology major Jaclyn Ross, who had a heartwarming voice that filled the room with hope that the people of Urinetown would be fine in the end. “I am already getting sad that the show will be over soon,” Ross said after the opening-night performance.

“It was a lot of work to create something really great. I appreciated what Chris brought to it,” said James Alexander, a sophomore vocal major who magnificently played Caldwell B. Cladwell, after the show.

Every song and dance number was executed with tremendous energy that nearly propelled the audience to stand up and dance along with the cast. The numbers were enhanced by the contributions of the stage lighting and a live band, conducted by junior music major Corey Wachala. One clever aspect of this performance was the several references to “the most expensive university in the world,” after which the cast would snap their heads toward the audience and snap them back on stage.

On the small stage, a tall wooden platform and impressive structure were erected for the production. The stage was cleverly designed to resemble a toilet. There was a flush handle and float ball that made the image complete, although it did take a bit of studying the structure to figure out what it was supposed to resemble.

There was an incredible amount of work put into this performance, and it showed. Scotch’n’Soda did a fantastic job with this production and lived up to the reputation the group has as a talented and passionate organization.