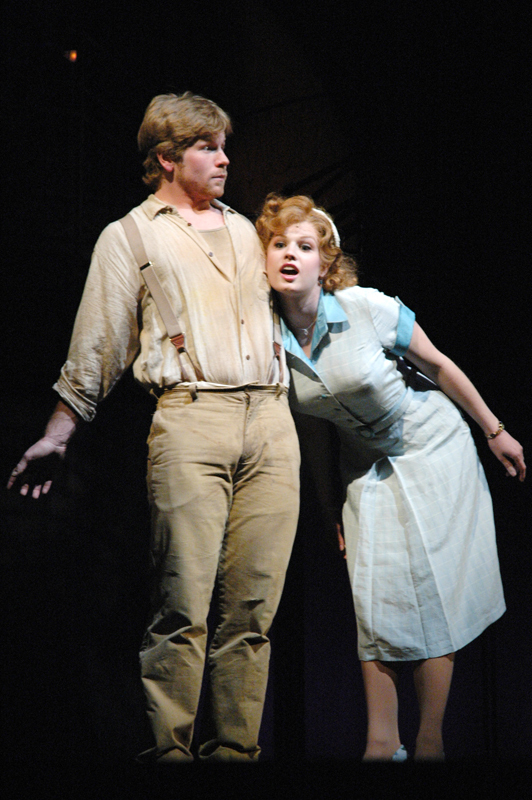 Tim Wilson and Johanna Brickey sing as Bobby and Hope in the 2005 School of Drama performance of Urinetown. Scotch’n’Soda is showing performances of the musical Thursday through Saturday. (credit: Kyle Branigan/Photo Staff)

The Scotch’n’Soda theater group will be presenting its rendition of Urinetown from Thursday through Saturday in McConomy Auditorium. Since the beginning of the school year, the group has been hard at work putting the production together.

Urinetown’s director, senior directing major Christian Fleming, discussed the show’s current progress and what it means to the theater group’s performers. “I think the production is a big undertaking for Scotch’n’Soda and really has pushed the limits of what Scotch’n’Soda can do,” Fleming said via Facebook message. “It is bold, highly theatrical, and I personally think, quite entertaining.”

Shalaka Kumar, a first-year information systems major, reflected on the upcoming production: “I think there will be really interesting and funny themes. I really want to see how it will play out. Oh, and I have a friend performing, so I guess I’m a bit more invested.”

Urinetown is a musical set in a world where a drought has led to a severe water shortage. To manage water consumption, people are forced to pay to be able to urinate in public facilities. Bobby Strong, played by first-year piano performance major Stephen Murphy, leads a revolt to free the citizens from authoritarian control over what they consider to be a basic need.

When writing the musical, Kotis was apparently inspired from his travels in Europe where he stumbled upon pay-per-use restrooms. Paris has been one of the leading cities to pioneer the idea of public pay-per-use toilets.

Using a restroom may seem like it should be an innate human freedom, but one may forget that there are costs involved with the upkeep of a restroom. However, this is not the case in Urinetown, in which the authorities are charging to deter the heavy use of restrooms in order to keep from using too much water. It will be interesting to see the manner in which the production portrays this bizarre world.

The production has been highly anticipated by students, largely due to the work the Scotch’n’Soda theater group has done with past performances such as The Rocky Horror Picture Show, Boeing-Boeing, and What We Bury.

“I think that people will be surprised by the overall level of professionalism, talent, and quality this production is offering,” Fleming said. “It showcases work from a variety of majors and has come together with the dedication of freshmen all the way to Ph.D students.”