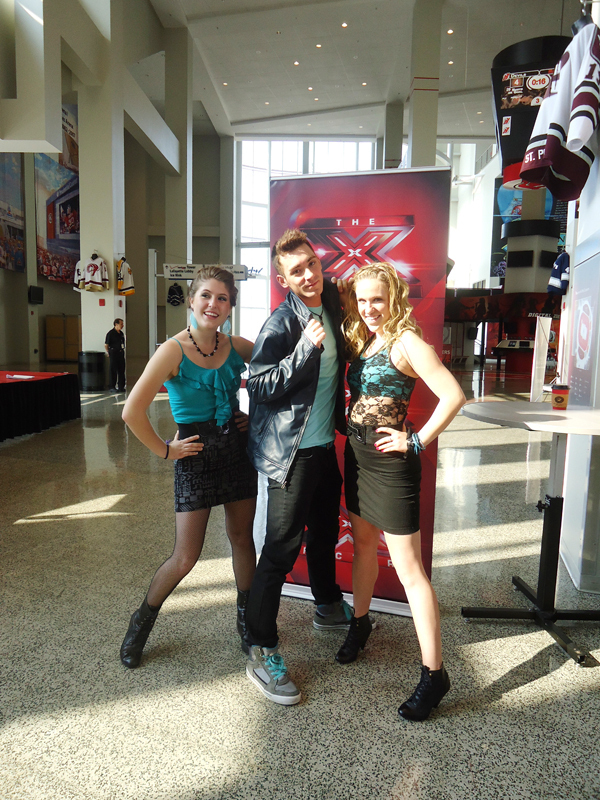 Michael Dunn auditioned for _The X-Factor_ with two of his best friends, Kait L and Julia Franklin, under the moniker Blackout. (credit: Courtesy of Michael Dunn)

Ethan Crystal has barely begun his education at Carnegie Mellon, but his ambitions already expand far beyond the confines of campus. This past summer, he performed with his high school a cappella group, Soul’d Out, on the television talent show The Sing-Off.

The group was only formed in his first year at Wilsonville High School in Wilsonville, Ore., but it quickly rose to prominence in national competitions. After placing second in the U.S. International Championship of High School A Cappella his senior year of high school, “We were like, ‘Wow, we did really, really well,’” Crystal said. “But then we decided, ‘You know, I think it’s time for us to try to reach even further — if we can get this far, we can reach even further.’”

The group auditioned in front of The Sing-Off’s producers near the end of the school year — it was “the weekend right after the seniors got out of school, so that day, we got out of school, [had] a celebration and everything, had three hours to pack and get supplies, and then we just [flew] down immediately [to audition]. It was crazy,” Crystal said. The group went through several rounds of auditions before being selected to go on the show.

Soul’d Out was the only high school group to make it to the top 16, and Crystal admitted that being the youngest was a challenge. “But the thing is, we knew when we went that we had to have the mentality that we were there for a reason,” he said. “We had to remember that we had what it takes to be on the show; otherwise we wouldn’t be there at all.”

The students’ performance history also gave them a slight advantage. “We’ve only been around for four years, but we’re [an] older [ensemble] than some of the groups on The Sing-Off — some groups had only performed [together] for months before the show, as just a few people coming together,” Crystal said. “We’ve performed together for years.”

When finally given the chance to perform on the second episode of The Sing-Off, the group sang a mash-up of “Aquarius” and “Let the Sun Shine In” from the musical Hair. The judges commended Soul’d Out’s maturity as a group: Shawn Stockman applauded Soul’d Out’s efforts, while Sara Bareilles called Crystal, who was the main male soloist, “adorable.” “That was the hardest thing not to tell people [before the episode aired]”, Crystal said, laughing. While Ben Folds criticized the group’s performance, he still praised its dedication, saying, “I was an idiot when I was in high school. You guys are awesome.”

Even though Soul’d Out was eliminated from the show at the end of the episode, Crystal was still pleased with the group’s performance. “I think we left it all out there.... I think we achieved the goal of making the audience feel the way that we felt,” he said.

Crystal credited the support of his high school administration and the community for Soul’d Out’s successes. “We literally would have not existed at all if it weren’t for them,” he said. “And it’s an interesting thing because, you know, we’re not a performing arts high school, and that’s one of the reasons why I’m really proud of how we did and how we got so far. I feel like I want Soul’d Out to become an example of what’s possible for a regular public school that supports its arts program.”

Overall, The Sing-Off was the perfect way to end Soul’d Out’s time together. “One of the most motivating parts of our time on the show was that this was our last hurrah together,” Crystal said. “We were so close. We did everything together.... There’s always Skype. There’s always Facebook. But I miss them a lot.”

Even though he isn’t performing with Soul’d Out anymore, Crystal hasn’t given up on a cappella: He’s now a member of The Originals, Carnegie Mellon’s all-male a cappella group.

“You know, I grew up watching Making the Band or American Idol with my mom and I was always like, ‘Oh, I want to be on that show,’” said Michael Dunn, a master’s student in entertainment industry management (MEIM). He recently decided to pursue that childhood dream by auditioning for The X-Factor as part of Blackout, a trio consisting of him, Emerson College student Kait L, and Pace University student Julia Franklin.

The trio first met in 2009 while performing in the East Coast stage premiere of High School Musical and “all became best friends,” Dunn said. Once the show closed, they continued to perform together, and, “when we found out that The X-Factor was coming to America and The X-Factor was looking for groups, we were like, ‘Oh, well, this is perfect for us — why don’t we just do this?’”

The X-Factor is a television talent show that, similar to American Idol, originated in the UK and was created by Simon Cowell. Unlike American Idol, though, the judges serve as mentors for the contestants, and musical groups — instead of just soloists — are allowed to enter as well.

Originally, the trio had looked for a fourth member to join them in the audition process. “We thought that dynamic [of two guys and two girls] worked better [than one guy and two girls],” Dunn explained, “but it was such a big commitment that people ... really couldn’t commit to standing in line for hours and auditioning for days and being filmed for weeks.”

Ultimately, though, their chemistry as a trio helped them succeed. “We all set off of each other and we just clicked and the producers saw that, and with all those cameras on us, we were just having fun and really high energy, and I think the show was totally into that,” Dunn said.

The group’s energy won it a spot beyond the auditions, and while Dunn was tight-lipped about how far the trio progresses in the competition, he did comment, “It’s been really, really exciting — it was kind of the craziest thing I’ve ever done, and it’s so unreal — to have the opportunity to perform for 4,000 people was amazing.”

Not only has Dunn been enjoying the experience as a performer, he has “tried to look at it from every side” of his education as an MEIM student, he said. “As a CMU student, I’m always thinking about what was happening, like this production’s working and there’s so much money behind the show and how they’re staying on schedule.”

It has also provided a great networking opportunity: “We’re all trying to pursue careers in the business aspect of the industry, so it really allowed me to make great connections with the executive producers and the associate producers,” Dunn said. “It’s all about who you know in this industry.”

No matter how well Blackout ends up doing in the competition, Dunn said he’s had an overwhelmingly positive experience on The X-Factor. “It’s a really happy and exciting environment, and everyone’s genuinely supportive of each other,” he said. “It’s an exciting opportunity, and I think everyone understands that and appreciates the moment they’re in.”