Stelarc presents ideas in melding technology with the body 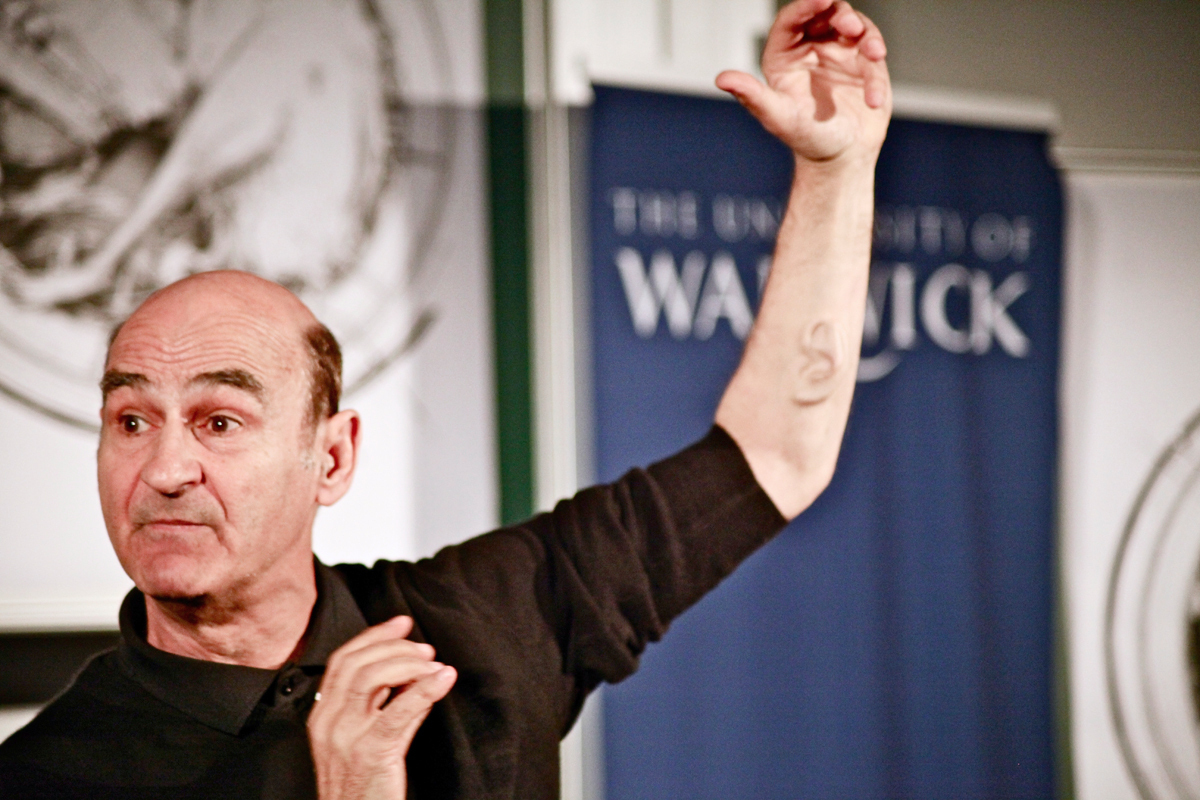 Performance artist Stelarc shows his left-arm ear implant during a keynote talk at the University of Warwick last June. (credit: Courtesy of Andy Miah via Flickr)

The Rashid Auditorium in the Hillman Center was packed this past Wednesday afternoon as students eagerly awaited a presentation titled “Alternate Anatomical Architectures: The Cadaver, the Comatose, and the Chimera.”

The lecture was given by Greek-born performance artist Stelios Arkadiou, better known as Stelarc. An honorary professor of arts and robotics at Carnegie Mellon, Stelarc has focused his work on technologically augmenting human physicality in a variety of ways. According to a press release on cmu.edu, “[Stelarc’s] visit to campus this week, which will include interchanges with students and an invitation-only performance at The Andy Warhol Museum, is indicative of the university’s growing fusion of art and science.”

“The body is a chimeric construct,” Stelarc said Wednesday, and to introduce technology into the body is to allow it “to perform as an extended operational system.” The development of this technology, he continued, is what defines the meaning of being human, especially in modern times.

Stelarc began the presentation with several examples of ongoing endeavors in his field. These included notions of what he called “flesh circulation” in the sense of circulating blood and organs around the body via transplants; “remotely connected bodies,” such as the case of phantom limbs; and “micro-robots,” which can be inserted into the bloodstream to internally maintain body functions. Each of these, Stelarc contended, requires a leap from conventional human design to something more effective that can be engineered with technology.

The second half of the artist’s lecture focused largely on some of his own unique experiments. During the ’80s, he put his own skin to the test by suspending his body in the air via hooks in his skin to simulate the effect of what he referred to as a “true 1-G gravitational field” on human skin, applying the feeling of gravity to all parts of the skin as a result of his body weight.

As a humorous aside, he explained how he was once arrested for hanging by his skin, naked, over the streets of New York — not because it was inappropriate, but because he was apparently inflicting potential danger to the people below.

Stelarc later experimented with prosthetics, devising a third arm that could function independently of the other two; he demonstrated this with a clip of himself writing the word “evolution” with three hands at once. This and other experiments with artificial appendages led him to the idea of engineering biological implants.

The concept of implants led Stelarc to implant an ear in his own left arm. He explained that he wanted to concatenate pieces of the human body into a system that is “spatially separated but electronically connected.” The extra ear, a prosthesis made from soft tissue and cartilage from his rib cage, can be connected to a microphone using Wi-Fi technology. To an astounded audience, Stelarc pulled back his left sleeve and lifted his arm, displaying the extremely lifelike ear embedded in his flesh.

The final slides of the lecture showed some of the cutting-edge technology in development today, such as the tissue printer, a device that can mass-produce living human cells. With a resounding laugh, the artist mused that there will one day be “organs awaiting bodies.”

Stelarc’s presentation was generally well received by the audience. Paul Andre, a post-doctoral fellow in the Human-Computer Interaction Institute, commented on the lecture in an email, saying that while he enjoyed the entertaining lecture, “it would have been interesting to hear more of his thoughts on the ‘obsolete body’ and the themes and ideas behind his work.”