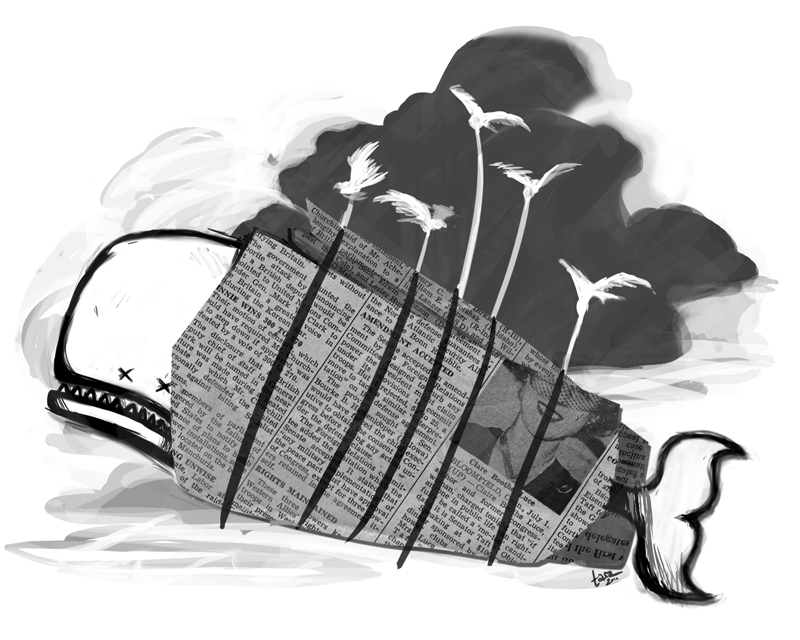 Credit: Tara Helfer/Art Staff
Editorials featured in the Forum section are solely the opinions of their individual authors.

We all love the concept of social networking websites. Whether it’s having a constant connection with friends, knowledge of when exciting events are happening, or simply procrastination, we view social networking sites as invaluable for their immediacy.

Recently, social networking sites have taken on a new role: fastest news source. In the modern age where everyone has a smart phone and is never more than a click away from the Internet, news distribution has been completely transformed. Social networking sites are growing exponentially. Twitter and Facebook, in particular, have become the leading sources of news through their incredible popularity and their ability to swiftly stream information.

Hardly a minute goes by without your Twitter or Facebook account updating and refreshing its stream of information. Social networking sites are not only connecting you to your friends, but connecting you to the greater world. A friend studying abroad in England shares a link to a recent terrorist bombing in Manchester; another friend in California updates his status to be about the Prop 19 debate; your cousin invites you to an event about a Washington, D.C. rally — the surge of news from around the world is endless, and it’s right at your fingertips.

Social networking sites’ growing supremacy in news distribution leads to the question of what will happen to the rest of the news media.

It is already a common assumption that printed news media is far beyond its glory days; sadly, The Tartan belongs to a dying breed. Furthermore, credible Internet news sources are few and far between. However, what of the television news sector?

In all honesty, news channels have lost their art.

A majority of news channels, most notably Fox and CNN, are blatantly biased. News shows have lost their variety and well-rounded reporting. It is a battle between the far right and the far left; a pragmatic moderate point no longer exists. Legitimately and objectively reporting the news is no longer important; ratings have become the only priority.

There has been an obvious shift in the background and quality of reporters. An increasing number of news hosts are primarily from the entertainment business; although they have experience in the journalistic arena, they made their careers being entertainers. For example, CNN’s newest addition, Piers Morgan, was made famous by his various appearances on reality TV shows. This is no mistake on the network’s part; these hosts know how to stir up an audience and deliver the desired ratings. In 2009, according to www.mediabistro.com, Glenn Beck “drew in more viewers than all three of the competing time-slot shows on CNN, MSNBC and HLN combined.”

Rousing partisan debates and being completely subjective in report coverage are becoming common occurrences in modern television news.
According to Jason Mittell, in his blog article “Debating Media Bias,” “News media shapes public opinion through the selection of what stories are told and what are omitted.... The selection of stories and perspectives triggers a process termed agenda setting, framing what is viewed as newsworthy and what is ignored by the news — a shorthand notion of agenda setting is that the news doesn’t tell us what to think, but it tells us what to think about. If viewers are unaware that a story or perspective even exists, they cannot begin to contemplate how it might fit into the larger context of the news they are receiving.”

Shows mocking traditional news channels, like The Colbert Report and The Daily Show with Jon Stewart, are quickly becoming the most credible and unbiased source of news. Yes, these shows are also aimed at entertainment; however, they still manage to deliver the news in a straightforward and objective manner. In mocking the news syndicates, The Colbert Report and The Daily Show push audiences to think practically about where they’re getting their news from and how ridiculous the traditional channels have become.

It is time we seriously consider the state of our news media. Traditional television syndicates have lost all sincerity, print news is being crushed by the technological age, and credible Internet sources are increasingly rare. Re-evaluation of where we get our news and how we interpret it is strongly advised.