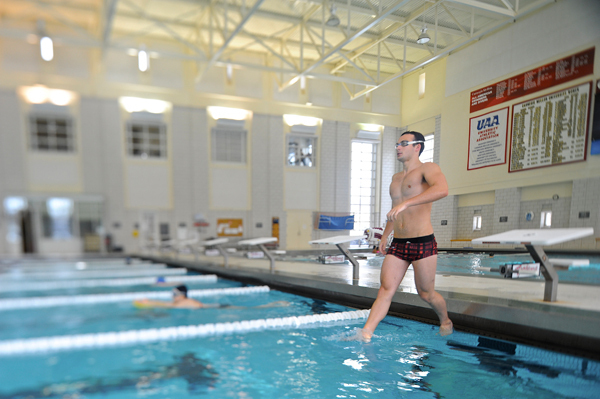 Many students talk about their growth as people during their college years, but senior Josh Plotnik has grown not only as a person but also as an athlete.

Plotnik came to Carnegie Mellon with a strong desire to swim. He began his development starting out as a walk-on to the men’s swimming and diving team.

Plotnik made his first University Athletic Association (UAA) appearance last year as a junior. It was not an easy road for Plotnik to get to this point, as he had to fight his way onto the team; having the privilege of competing at UAAs was already an accomplishment. However, Plotnik was not satisfied; he continued to make a splash at UAAs, where he competed in the 100-yard breaststroke. It was his first time swimming the event in less than one minute, and he finished 10th overall.

His best performance so far this season was at the Nike Cup. Plotnik swam the 100 breaststroke and finished a half-second faster than his UAA time from last season. He is going into the UAAs with the fifth fastest time. “I feel that I am moving in the right direction,” Plotnik said.
As a biological sciences major, Plotnik has found the perfect balance of academics and athletics here at Carnegie Mellon. In the future, he is looking to attend graduate school and work toward a Ph.D. in microbiology.

Plotnik feels truly grateful for his teammates who have helped him reach his goals. “It wouldn’t have been possible without teammates to push me in practice; they were always willing to race me, and at the same time they always kept it light,” Plotnik said.

UAAs are less than a month away, and as the swim team continues to train, Plotnik will be one to watch.