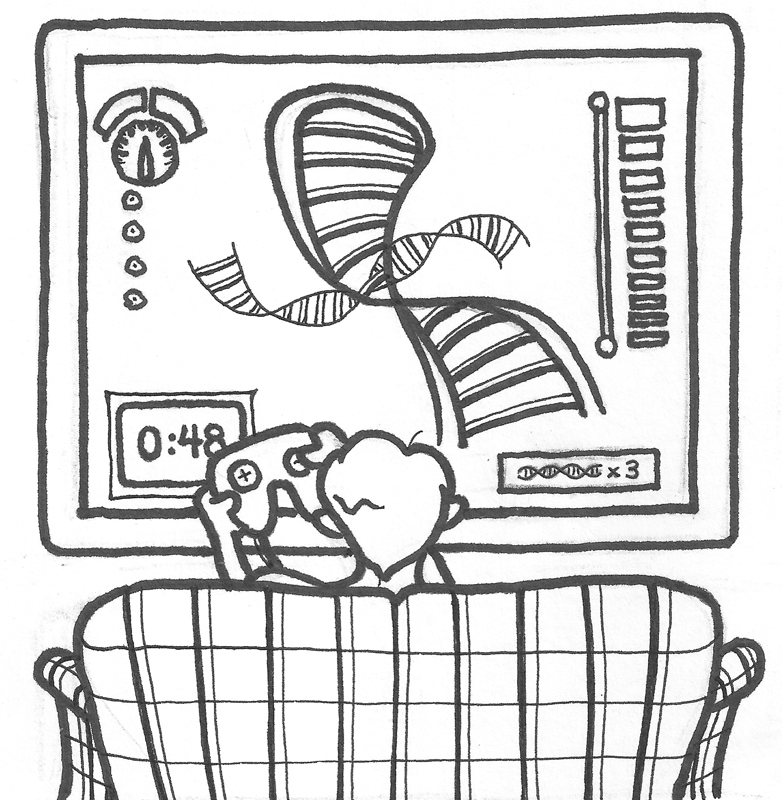 Computer science and robotics professor Adrien Treuille and doctoral student Jeehyung Lee are two of the main minds responsible for creating eteRNA, an online game in which users build RNA strands and then predict how they will synthesize or fold. Rhiju Das, the other co-creator responsible for the original idea of trying to predict RNA synthesis using models, is a biochemistry professor at Stanford. This project can help researchers uncover properties about RNA behavior. (credit: Adelaide Cole/Art Editor)

For many years now, video games have been labeled as being brainless and unproductive with little to no educational value. However, a joint team of researchers at Carnegie Mellon University and Stanford University has developed a way make online games fun, challenging, and mentally stimulating — while simultaneously tapping into an enormous resource of human brainpower. Computer science and robotics professor Adrien Treuille and doctoral student Jeehyung Lee are two of the main minds responsible for creating eteRNA, an online game in which users build RNA strands and then predict how they will synthesize or fold. Rhiju Das, the other co-creator responsible for the original idea of trying to predict RNA synthesis using models, is a biochemistry professor at Stanford. This project can help researchers uncover properties about RNA behavior.

“Right now, the initial challenge is, why don’t the RNAs synthesize in reality the way our models predict they do? What’s wrong?” Treuille said. Lee added, “It’s really easy to come up with puzzle solutions with computer [algorithms], but quite hard to come up with solutions that fold correctly in nature.”

In eteRNA, users are presented with a 2-D model of an RNA strand and are challenged to recreate an existing model using the four base amino acids — adenine, guanine, cyanine, and thymine. Challenge puzzles are taken from RNA examples found in nature — ones that have already been categorized in existing databases. After solving puzzles correctly and gaining points, higher-level users are allowed to enter the RNA lab, where they can vote on top designs; the top eight are sent to Stanford for real-life synthesis.

Since its inception 13 days ago, the game has already gained a dedicated base of players. eteRNA already has over 15,000 mostly U.S.-based registered users, producing 300–400 designs a week. “There are people who sort of live in the website, solving every puzzle that we give them. Actually, some of them are solving puzzles faster than we make them,” Lee said.

On the research side of the game, Treuille and Lee have found success; they have reported several successful designs that synthesize in reality. This empirical project allows the team to compare how their theories about RNA folding match up to live results in a lab. With each round of puzzle solving and experimentation, the team receives more and more information about how to perfect their theories and update their models. Treuille is especially excited about utilizing eteRNA’s massive online user base to collect RNA designs — ones that contain nuances and randomness a computer algorithm wouldn’t normally produce. “Citizen science opens up the possibility of doing research to a huge number of people instantly. Within that large group, you will find people who are very, very good at it [due to] the law of averages,” Treuille explained.

“We’re slightly making the designs a little more complicated and giving it to the players, and it’s actually a learning process for them,” Treuille said. For the next round of puzzles, the team plans on shortening the stacks and lengthening the loops in an RNA strand, a type of formation not yet seen in the game.

“The game that the players are playing now will not be the same game they will play in a year. It will be a lot more refined and perfected based on what the player community said,” Treuille commented. The team also closely monitors the online forums to spot player criticisms and deliver a better experience. Ideally, with funding, Treuille hopes the project will have a lifespan of three years.

eteRNA’s origins come from a previous program designed by Treuille and Das called Foldit, a game in which the user is challenged to predict how proteins will fold. Foldit was slightly more complex than its successor, containing 20 amino acids and being in 3-D. Lee, who is responsible for video game programming and design, created a prototype for determining protein research and presented it with Treuille and Das at Rosettacon — a conference for software design — and soon after the idea for eteRNA was born. While eteRNA started out as a 3-D program, Treuille and Lee thought that such a game might be too complicated for users. Coupled with the fact that RNA can be fully represented in 2-D using four base pairs, the team decided the best method to get designs would be with a simple 2-D game. “It’s just like Tetris, all in 2-D,” he added jokingly.

Treuille is excited about the current results and is optimistic about future findings. “If we can take that knowledge and turn it into a set of rules which tell us when RNAs will synthesize properly, and also ultimately computer programs that automatically generate RNAs which do synthesize property, then that is a highly exciting scientific result. And we would have done it with 15,000 people.”