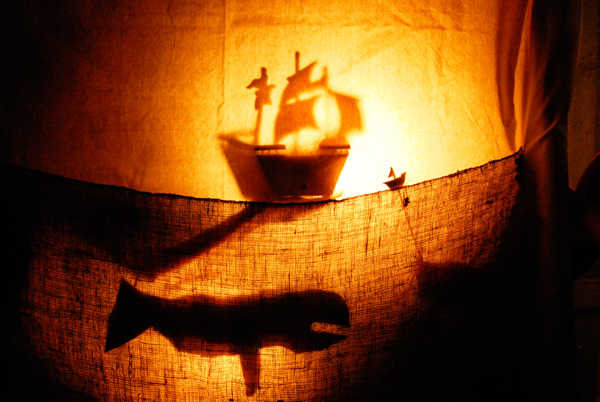 PigPen Theatre makes great use of shadow puppets and music in all of its shows. (credit: Courtesy of Arya Shahi) 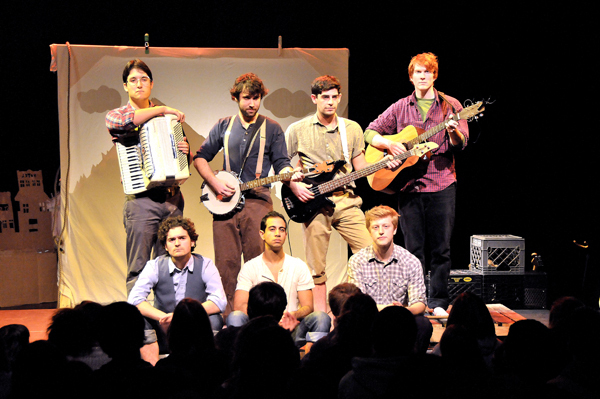 The PigPen Theatre ensemble sings during a performance of The Mountain Song, the tale of a carpenter traveling to attend his daughter’s wedding, despite not knowing where the wedding is actually taking place. (credit: Courtesy of Arya Shahi)

It’s a peaceful Sunday evening, and the campus is enveloped in a quiet, lazy slumber. There is not a person in sight, yet there is that general uneasiness in the air as another ominous Monday gradually looms closer. It is on days such as these that the PigPen Theatre Company convenes in order to rehearse for its productions, its members tearing themselves away from the realities of schoolwork in order to create their own colorful, unique productions. Their pieces incorporate folklore, fairytales, shadow puppetry, movement, music, and rhythm — a delightful blend of various aspects of theater to completely master the art of storytelling. Indeed, the ensemble has discovered “really innovative ways of portraying characters,” said Joe Mendick, a first-year acting major.

The group’s talent has even earned it the honor of “overall excellence in a production” at the reputable New York City International Fringe Festival, considered one of the greatest performance arts gatherings in the nation, in 2010. According to Newsvine.com, “PigPen is a supreme example of low-tech theatrical splendor at its wittiest, and the results are nothing less than magical.” It is hard to believe that the PigPen Theatre Company’s journey to such nationally acclaimed success began in each ensemble member’s first year at Carnegie Mellon.

It all started with Playground, an annual tradition within the School of Drama that gives students the opportunity to create and perform in original productions. As first-years, Alex Falberg, Arya Shahi, Ben Ferguson, Curtis Gillen, Dan Weschler, Matt Nuernberger, and Ryan Melia were not invited to perform in productions organized by upperclassmen. Instead, they decided to create their own piece, overcoming initial laziness and forcing themselves to work on a script that Weschler recalled as being “an abysmal piece of theater.”

However, just days before their scheduled performance, they opted to start over, instead choosing to use a plot that they had created together during a simple story-telling exercise. Ultimately, it was their instinct and their intuition that led to the creation of The Hunter and the Bear, the PigPen ensemble’s first production. The 22-minute piece recounted the tale of a hunter’s journey in search of a bear that had killed his son. Strangely hilarious, dark, and even sinister, the plot took a turn when the hunter’s encounter with the bear wasn’t quite what the hunter thought it would be.

Finally, the day of the PigPen ensemble’s first performance arrived and the group scrambled to prepare their performance space for the show, running into a few setbacks that they had not quite anticipated. The performance required a dark area for the show’s shadow puppetry component — however, the group was inconveniently scheduled to perform in a studio with large windows on a sunny day. Commotion ensued as comforters, mattresses, and sheets from various dorm rooms were dragged to the studio in a last-minute attempt to create the dark atmosphere that was absolutely vital for the show. Although its first performance was extremely successful, it was only after the group’s sophomore-year Playground experience that the PigPen ensemble considered creating a theater company, bringing up the possibility of performing together even after graduating from Carnegie Mellon.

It was ultimately their Playground experiences together that helped the ensemble members become close friends — according to Nuernberger, “everyone [had] something to contribute.” Despite disputes and disagreements as to the plot or content of their productions, a consensus was always reached among the ensemble members since “everyone [wanted] the best for the story,” Melia said.

Recently, the group’s increasing involvement in setting up the PigPen Theatre Company allowed its members to develop even closer relationships with each other, rather than being “just college friends,” Ferguson said. Instead, they have become a family, and this is certainly reflected in each of their performances. As hailed by the Vineyard Times Review, PigPen Theatre Company’s The Mountain Song is “a brilliantly choreographed piece of theater with a sense of continuous activity and a flow that could only be wrought by a group accustomed to working closely together.” Indeed, every member of the ensemble contributes to every aspect of each production, from the music to the script and the choreography, as well as lighting and costumes — every member is valuable to the ensemble as a whole.

Thus, with a combination of talent, luck, and teamwork, the PigPen Theatre Company was immensely successful at the 2010 New York City International Fringe Festival for its latest piece, The Nightmare Story; the company was asked to return to New York City to give an encore performance at the Players Theatre, and even gained the opportunity to perform at the prestigious La Mama, one of New York City’s grandest experimental theaters.

Achievements aside, the ensemble members also felt it important to share their first performance in New York City with each other, especially after seeing one another grow and develop as actors throughout the years. The Fringe Festival opened an exciting new world for the PigPen Theatre Company — Shahi described it as a “community of young artists,” with which the group hopes to collaborate in the near future.

Reflecting upon their time spent at Carnegie Mellon, the ensemble members are very grateful to the professors and administration members of Carnegie Mellon’s acting department, who have been adamant supporters and mentors to the group, sharing and contributing to its unique interest in folklore and storytelling while promoting its productions. The group is also especially thankful for the Carnegie Mellon acting department’s unique method of influencing young actors by carefully adapting to each individual student’s performance strengths.

The PigPen Theatre Company is one of the few ensembles from Carnegie Mellon to become prominent in the realm of theater, following in the footsteps of the Great Samaritans, another Carnegie Mellon ensemble that has graduated. Perhaps one of the major reasons that the PigPen Theatre Company has achieved such heights of success is because each member of the ensemble is always open to new musical styles and storytelling methods that will enhance its productions — they count The Decemberists, Woody Guthrie, Johnny Cash, Jim Henson’s The Storyteller, and Forrest Gump amongst PigPen’s numerous influences.

It seems that all those Sunday rehearsals and plans ultimately created an extremely strong and capable theatrical ensemble, a group that will go on to achieve many more successes in New York City, perhaps continuing to strengthen its ensemble in New York or maybe even turning their attention to animation in the years to come — there seems to be an infinite number of possibilities for the PigPen Theatre Company, an infinite number of paths from which to pick and choose.

Yet, whatever the PigPen ensemble might decide to do in the future, its members will still have that wonderful ability to tell stories, to awaken the imagination of both adults and children alike, to make one feel like “being an eight-year-old again,” according to first-year drama student Josh Buckwald. They will always have that wonderful ability to take creative risks and leaps, to dare to do what has never been tried before, to leap forward. It will be interesting to see what they will achieve next.